STS-133: Managers to decide on ET-137 stringer modifications next week 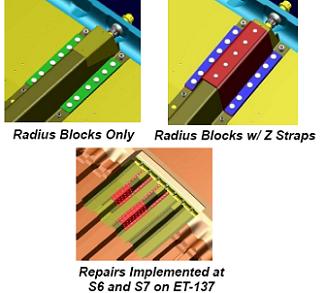 Following a Space Shuttle Program (SSP) meeting on Thursday, a decision on carrying out modifications to STS-133’s External Tank (ET-137) won’t be made until next week, as engineers inside the Vehicle Assembly Building (VAB) carry out repairs to a number of additional cracks, found during Non Destructive Evaluation (NDE) scans of the intertank flanges.

Since arriving back in the VAB, Discovery’s tank has received X Ray and Backscatter scans of the entire circumference of the two flanges on the upper and lower areas of the intertank, a task which could not be completed out at the pad due to access constraints.

The scans were called for as part of the root cause and flight rationale discussions following the observation of four cracks on the LOX/LO2 Intertank flange, which caused a large crack to form in the flange’s foam during the scrubbed tanking attempt back in November.

The four cracks were found on the S6 and S7 stringers – an area which faces the orbiter’s critical Thermal Protection System (TPS), thus a concern from a foam liberation standpoint. The new cracks are located on the opposite side of the tank, and will undergo the same repair procedure that was carried out at the pad on the original cracks.

This repair, which will involve foam removal, followed by the installation of doublers, should result in the tank being confirmed as defect-free, although a decision is yet to be taken on whether to carry out additional work via the installation of a modification to a number of the stringers.

“The other decision that still needs to be made is if they intend to perform any additional modifications to the tank,” noted a memo ahead of the meeting (L2). “There are three proposals on the table: 1) fly with no additional modifications to the tank, 2) adding what are called “radius blocks” or 3) adding “radius blocks with Z straps” on the stringers.

“There is also an open question if they want to do these mods on 18 or 36 or all the stringers. Even if the modifications are required (at least the 18 or 36 stringer modifications), there is a plan that will allow us to make the Feb 3 window.”

Should managers decide to carry out modifications to the tank, the “radius blocks” modification will be similar to the doubler installations conducted on the S6/S7 stringers. The modification options were down-selected as a preference due to their history of flying without issue on numerous External Tanks over the history of the Program. 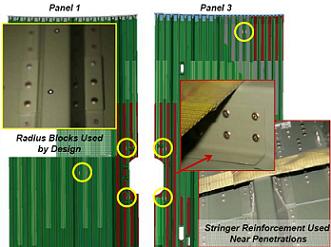 Once the foam has been removed from the stringer area, engineers will leave the first row of fasteners in place to mitigate clearance issues with the fasteners which need to be removed (the next six rows). The holes on the stringer will then be “reamed” to accommodate the larger hole size required for installation blind fasteners (A286 Huck).

With the stringer area ready to receive the radius block, the installation would mirror the doubler work, prior to visual inspections the modification is firmly seated in place.

However, the tank is deemed to be in a “strong” configuration, based on Tanking Test data – which also showed the S6 and S7 doublers performed as advertised – possibly allowing managers to press ahead with flying the tank “as is” once the doublers have been installed in the area of the latest cracks.

Managers are expected to determine the forward path for the tank as early as Monday.

(Lead Image via KSC/NASA.gov. Images within the article via L2 presentations).