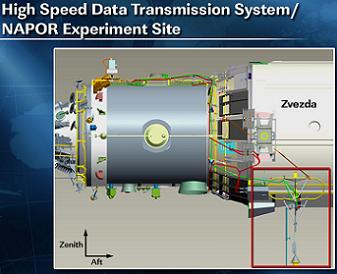 The International Space Station (ISS) Expedition 26 crew have conducted the Russian EVA-27 on Friday, marking the first in what is currently planned to be a total of 10 Shuttle and ISS EVAs in 2011. Projected to be a six hour EVA, the spacewalk began with hatch opening at 2:29 PM GMT and ended well ahead of schedule at 7:52 PM GMT – after the duo completed all their tasks without any serious issues.

The EVA was performed by Russian Cosmonauts Dimitri Kondratyev, who has been on the station since December last year, and Oleg Skripochka, who has been on the station since October. Kondratyev is EV-1, and was wearing the read-striped Orlan-MK spacesuit, while Skripochka is EV-2, was wearing the blue-striped suit equipped with a Wireless Video System (WVS) camera and helmet lights, both provided from NASA Extravehicular Mobility Unit (EMU) spacesuits.

The spacewalk was Kondratyev’s first EVA, and Skripochka’s second, as he previously conducted Russian EVA-26 EVA in November 2010.

After opening the hatch of the Docking Compartment-1 (DC-1) “Pirs”, the first order of business for Kondratyev and Skripochka was to temporarily tether their equipment to a Service Module (SM) handrail for later retrieval – consisting of an EVA tool carrier, and antenna, a cable reel, and protective covers.

The pair then began their first task by translating to their first worksite on the SM. Once arrived at their worksite, the duo worked to install their antenna onto the SM.

The antenna will be used for an experimental new system called the Radio Technical System for Information Transfer, which is designed to downlink large data files from the Russian Segment (RS) using radio technology, at a speed of around 100 megabytes per second.

Later in the EVA, the pair used their cable reel to route cabling between the antenna and a patch panel outside the SM. They then successfully jettisoned the antenna’s cover and the empty cable reel.

The second task for Kondratyev and Skripochka was to translate, along with their two experiment covers, over to the portable multipurpose workstation on Plane II (Port side) of the SM RO (Work Compartment) LD (Large Diameter).

Once they had arrived, the pair covered, and then remove the plasma pulse generator from the portable multipurpose workstation. 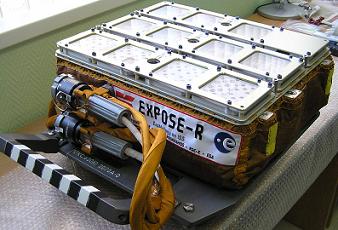 The pair then covered and remove the EXPOSE-R experiment from the Zenith side of the portable multipurpose workstation. EXPOSE-R was a joint Roscosmos, European Space Agency (ESA) and commercial experiment that has been used to expose nine samples to the vacuum of space since it was installed outside the station in November 2008.

EXPOSE-R was brought back inside the station, where its three data cassettes will be removed and sealed for eventual return to Earth on a Soyuz spacecraft. 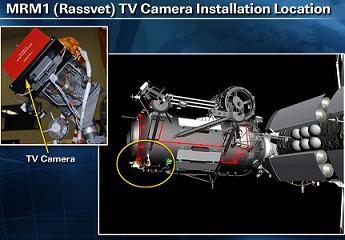 Once the camera had been retrieved, the duo translated to MRM-1 to set about installing the camera. The camera was originally installed on MRM-1 facing Zenith, as it was used to guide MRM-1 into the FGB Nadir docking port during the STS-132 mission last May. As it is no longer needed facing Zenith, it was relocated to face Nadir in order to provide video views of approaching Soyuz spacecraft.

The camera was removed from MRM-1 during Russian EVA-26 last November, but the spacewalkers were unable to re-install the camera on MRM-1 due to interference with Multi Later Insulation (MLI) adjacent to the camera mount. The camera was brought back inside the ISS for installation on EVA-27.

This time around, Kondratyev and Skripochka used a cutting tool to rip threads on the interfering MLI, and once installed, mated the camera to a pre-wired connector.

The pair then translated back to DC-1 and close the hatch to conclude the EVA. 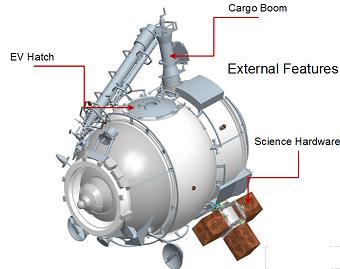 For the duration of the EVA, ISS Commander (CDR) Scott Kelly and Flight Engineer-1 (FE-1) Alexander Kaleri were isolated inside the Mini Research Module-2 (MRM-2) and Soyuz TMA-01M/24S spacecraft. FE-5 Paolo Nespoli and FE-6 Cady Coleman had access to everywhere in the station that is forward of the Service Module. The Aft section of the SM remained uninhabited for the duration of the EVA.

This is due to the fact that SM PkhO (Transfer Compartment), to which DC-1 is docked at Nadir, was needed as a backup airlock (A/L) in case the primary A/L, DC-1, cannot be repressurised at the end of the EVA. As MRM-2 is docked to the PkhO Zenith port, the hatches between MRM-2 and the PkhO must be closed so that the PkhO can be depressurised if needed.

Due to the fact that Soyuz TMA-01M is docked to MRM-2 Zenith, Kelly and Kaleri must be inside MRM-2 for the duration of the EVA, as ISS flight rule requirements state that all crewmembers must have access to a Soyuz in the event of an emergency evacuation of the station.

Soyuz TMA-20/25S is docked to MRM-1, which is located on the Functional Cargo Block (FGB) Nadir port which is forward of the PkhO, and so Nespoli and Coleman did not need to be isolated in their Soyuz during the EVA.

Progress M-08M/40P is docked to the Nadir port of DC-1, and so the hatches between Progress and DC-1 have been closed in order to maintain pressure inside the Progress during the EVA. The hatches will not be opened after the EVA, however, as M-08M is scheduled to undock from the ISS just three days later on Monday 24th January. 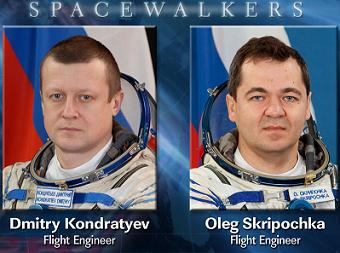 Earlier this week, Kondratyev and Skripochka conducted a “dry-run” of EVA-27, which is a suited run-through of all EVA procedures leading up to hatch opening. These types of dry-runs are unique to Russian EVAs, and are conducted in order to verify that there are no problems in the pre-EVA procedures that could lead to a delay in the start of the EVA on the actual day.

For the dry-run, Kondratyev and Skripochka suited up in their Orlan-MKs (with a fluid umbilical attached for cooling) and then translated around inside DC-1 in order to assess any potential impacts of DC-1’s interior config to suited operations, including operation of the EVA Support Panel (POV), Body Restraint Tether (BRT), Crew Lock Bag (CLB) and EVA cameras. The dry-run was completed successfully, with no major issued reported by the crew.

Following the completion of the EVA, the Kondratyev/Skripochka duo will make another EVA on 16th February, where the pair will install two new scientific experiments on the exterior of the SM.