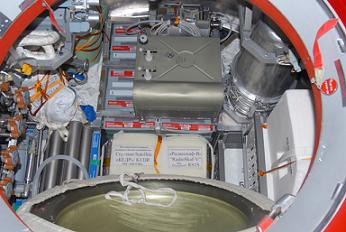 Hot on the heels of JAXA’s HTV-2 arrival at the International Space Station (ISS), Russia’s Progress M-09M/41P spacecraft has docked with the ISS folllowing its launch from the Baikonur Cosmodrome in Kazakhstan. After a short duration enroute to the Station, the Russian vehicle docked to the ISS at the Docking Compartment-1 (DC-1) Pirs  Nadir port – recently vacated by Progress M-08M/40P – at 2:39 AM GMT on Sunday.

On board 41P is 2.5 tonnes of cargo, which includes propellant, oxygen, food, crew parcels, scientific equipment, and additional hardware for the Russian Segment (RS) and United States Orbital Segment (USOS).

There are a number of notable cargoes aboard Progress M-09M, one of which is the Earth Artificial Satellite (EAS) “Kedr”.

Kedr is a 30 kg, 550 х 550 х 400 mm minisatellite, classified as such due to its mass of less than 100 kg. It is designed to transmit 25 greeting messages in 15 different languages, earth photos, and telemetry data for its scientific equipment and service systems.

It will transmit its signal at 145.95 MHz, with the amateur radio callsign is RS1S. It will be controlled by Rocket & Space Corporation (RSC) Energia’s amateur radio station. 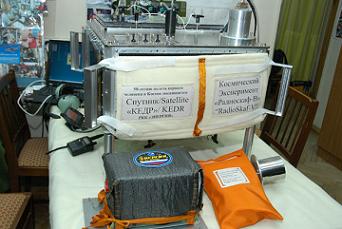 The satellite’s name is derived from Yuri Gagarin’s callsign, which was also “Kedr”. Its purpose is to perform the Space Experiment (SE) “RadioSkaf”, which involves the development, processing and launch of a supersmall spacecraft during an EVA.

It will also be used for student space education programs, and for this year’s celebration of the 50th anniversary of Yuri Gagarin’s spaceflight. Kedr will be delivered to the ISS inside Progress M-09M, and will be manually jettisoned overboard to free-fly from the ISS during Russian EVA-28 on 16th February.

Other payloads of interest are books by Russian space exploration founder Konstantin Tsiolkovsky, courtesy of Tsiolkovsky’s grandson. A Birthday gift for ISS Commander Scott Kelly is also aboard, marked “Not to open till Feb. 21” – Kelly’s birthday.

A recent ISS stowage summary document (available in full on L2) outlined some of the stowage concerns relating to 41P.

ISS stowage is becoming increasingly challenging, due to the delay of STS-133/ULF-5 with the Permanent Multipurpose Module (PMM), two large capacity Visiting Vehicles that will be present at ISS prior to STS-133 – Japan’s HTV-2 and ESA’s ATV-2 – and a backlog of trash awaiting disposal. The need for the PMM is made clear in the stowage document, which details the contents of stowage locations on station.

This cargo will need to be moved prior to STS-133, in order to allow access to Node 2’s Forward hatch. All stowage racks on ISS are volumetrically full, and little space exists in the laboratory modules due to scientific equipment.

Five CTBEs of food from 41P will be stowed in Node 1. Crew clothing from 41P will be transferred to each crewmember’s personal space. 20 crew hours are budgeted to unload NASA hardware from 41P, and 41P will likely be completely unloaded prior to the STS-133 docking.

Progress M-07M/39P, currently docked at SM Aft, and the recently departed Progress M-08M/40P will together dispose of 59 Cargo Transfer Bag Equivalents (CTBEs). 39P is also being used as a temporary staging area for cargo.

41P will remain docked to the DC-1 Nadir port until April 26th. If the current schedule holds, it will undock from the ISS during the STS-134 mission – a first for the ISS program.

1983-1986: The Missions and History of Space Shuttle Challenger