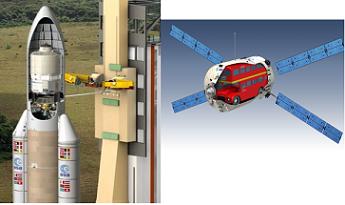 Arianespace’s launch of the European Space Agency ATV-2 (Automated Transfer Vehicle 2) spacecraft on a multi-month mission to deliver thousands of pounds of supplies to the leading orbital outpost has lifted off at the second attempt at 21:50 GMT on Wednesday, following a scrub late in Tuesday’s countdown. The mission is set to hold the distinction of being flown to orbit on the 200th Ariane rocket launch, the 56th launch for the workhorse Ariane 5 variant.

The resupply vehicle – named after famous German astronomer and mathematician Johannes Kepler – was delayed after a red in the countdown at around T-4 minutes on Tuesday. Given the lack of a launch windown, the Ariane 5 was placed into a 24 hour scrub turnaround. Now ATV-2 has launched on Wednesday, STS-133 may move to February 25. However, discussions are continuing within NASA to evaluate the actual launch date.

The launch – at the second attempt – from the Guiana Space Centre in Kourou, French Guiana in South America, will aim to place ATV-2 into a 51.6 degree inclination orbit for an eight (8) day chase with the International Space Station. During the initial eight days in orbit, ATV-2 will perform several phasing burns to properly align its trajectory with that of the Space Station’s.

Originally, ATV-2’s launch schedule was created with 3-days of launch contingency (on orbit loiter capability) dubbed a “scrub window” to preserve a February 26th docking to the international outpost.

However, delays to the STS-133/Discovery mission into late-February prompted NASA and ESA to reevaluate this 3-day scrub window.

As a result, the 3-day launch contingency time was removed from ATV-2’s launch profile, thus leaving no launch delay contingency time between liftoff and the mandatory 8-day phasing period leading up to docking with the Station.

In all, unlike ATV-1 in 2008, ATV-2’s mission will have no on-orbit demo days and will proceed directly to docking with the Space Station at an altitude between 350-380km. 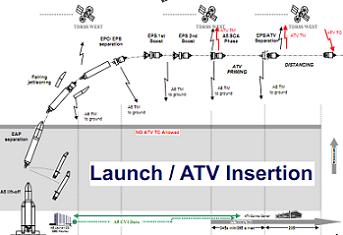 The December document, which protected for a potential launch of Discovery’s 133/ULF5 mission in late-February, further states that minimal ISS crew sleep shifting would be required following ATV-2’s docking to the Russian Zvezda Service Module and Discovery’s docking to PMA-2 on the direct opposite side of the ISS. 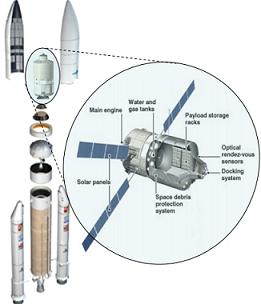 While the planned docked period is only scheduled to last ~96days, ATV-2 could remain docked to the ISS for nearly 180days. In fact, the 96-day docked mission is currently classed an Under Review and will be evaluated as the mission progresses.

One hundred kilograms of gas will also be transferred to the Station before the ISS crew begins packing the vehicle for its destructive return to Earth.

Prior to ATV-2 undocking, the ISS crew will remove all items identified as re-useable (smoke detectors, for example) before “[installing and activating] one sensor suite inside ATV-2 for Reentry Breakup Recorder Payload and [installing and testing] ATV control panel and PCE in the SM prior to undock.”

Perhaps one of the more noticeable new ops during ATV-2’s mission will be the lack of on-orbit demonstration days. 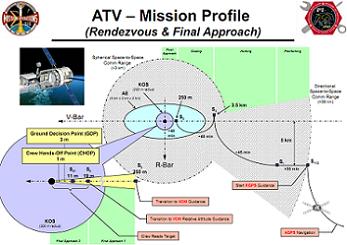 During the premiere ATV mission in 2008, two (2) demonstration days were held to validate ATV’s overall ability to perform automated rendezvous and docking ops with the Russian portion of the Station.

These demo days were largely a result of a trilateral agreement between NASA, Roscosmos (the Russian Federal Space Agency), and ESA to “demonstrate safety-critical ATV functions on-orbit the first time before they are needed for safety and to actively reduce risk.”

Thus, these demo days were not considered to be in-flight vehicle qualifications and were not mandatory to meet NASA Safety Requirements since those requirements were met prior to launch.

As such, these demos will not be repeated on ATV-2’s flight since the vehicle is of the same design as ATV-1.

Moreover, ATV-2 will be used (as numerous second vehicle flights are) to prove software and hardware capability and ops concepts. 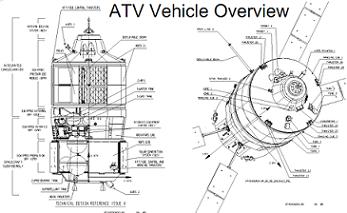 This new capability provides additional redundancy during prox ops – especially during the rendezvous phase. As stated in the MOD FRR Flight Director Overview presentation, available for download on L2, “If 1 TDRS chain fails prior to S-1/2, escape to parking, check out prox link with ground stations, re-rendezvous with IMMT approval” would be allowed.

Similarly, “If 1 TDRS chain fails after S-1/2, continue to dock, configure software for possible loss of second chain, and prepare plan for undock” would be initiated.

Should the second TDRS chain fail past the S-1/2 point, either ATV-2 itself or the ISS crew would initiate an ATV-2 escape procedure from ISS and the vehicle (ATV-2) would then be prepped for reentry. 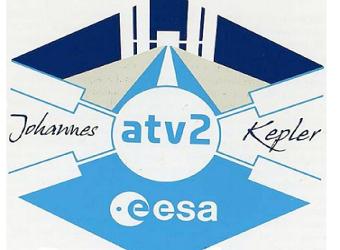 Since Discovery will not launch until after ATV-2’s docking to the Station, ATV-2 will have plenty of comm satellite and ground tracking/comm station availability/use during its launch, orbital insertion, and phasing periods.

In all, three (3) C-band radar passes will be available to support ATV-2 during the launch and post-insertion phases of the flight. The Jonathan Dickenson station will be available during orbit 2 ops, as will the MILA tracking station at Cape Canaveral, FL and Wallops station in Virginia.

One SSA 20 minute comm coverage period will be required every 5 orbits.

As noted by the Network MOD FRR presentation, “In the event of a contingency, all available C-band radars [will] be brought up for support.” 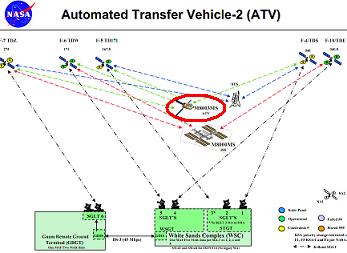 In all, ATV-2 will use four TDRS satellites: TDS, TD171 (for SSA coverage), TDW (for MA coverage), and TDZ. Critical support will be carried through SSA and non-critical ops through MA and available SSA.

Moreover, some of the same TDRS issues the JAXA (Japan Aerospace Exploration Agency) team prepared for during the ramp up to the HTV-2 launch last month, will be covered by the ATV-2 control team as well.

The TDS (TDRS-4) is also experiencing downlink telemetry errors (hits) which are irregular and random.  As with HTV-2, a spare Traveling Wave Tube Amplifier (TWTA) is available should these downlink errors occur.

Furthermore, all SSA events will be scheduled on the SA1 antenna only of TDRS-275. No restrictions exist for MA ops and full utilization of the Eastern and Western TDRS satellites exists for these ops.

Thus, the scheduled time on TDRS-275 will be minimized and the SA1 antenna used only for docking and undocking with handover to TD-171 as early as possible. Lastly, all times of use for TDRS-275 must be preapproved by the NASA Network Director.

(Images: Lead – ESA. Within the article – via L2 ATV-2 Presentations).