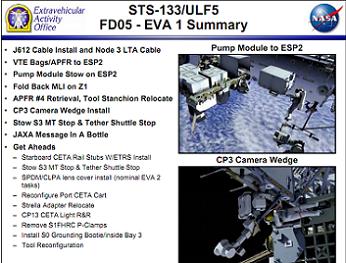 As Discovery continues to sail through her STS-133 mission with flying colors, astronauts Steve Bowen and Al Drew have completed the mission’s first of two EVAs (Extravehicular Activities). The first STS-133/ULF5 spacewalk included the retrieval of a failed Pump Module and MLI (Multi-Layer Insulation) blanket work on the Z1 truss. Meanwhile, sister orbiter Endeavour has achieved a major milestone for her upcoming final mission: rollover to VAB for mating with ET-122.

Flight Day 5 (FD-5) is underway for Shuttle orbiter Discovery and her six-member flight crew. Walking up at 0623 EST, Discovery’s crew got right to work this morning with Airlock repressurization to allow Steven Bowen (EV 1) and AL Drew (EV 2) a hygiene break following their overnight “campout” in the International Space Station’s (ISS’s) Quest airlock.

Following the ~50-minute hygiene break, Bowen and Drew reentered the Quest airlock, where the airlock was once again depressurized to 10.2 psi.

An ISS daily planning conference with the six-member ISS crew was held at ~0820 EST as part of the usual daily tag-up between flight controllers in numerous ISS control centers world-wide and the ISS crew.

Bowen and Drew then moved to their EMUs to battery power ~30 minutes after the start of Crew Lock depress – officially marking the start of EVA-1 at 10:46 EST.

Approximately 1.5 hours into the EVA, Drew began setting up the Vent tools (a 20 minute procedure) while Bowen, having ingressed the foot restraints on the end of the SSRMS, moved to the failed Pump Module where he began retrieval operations. 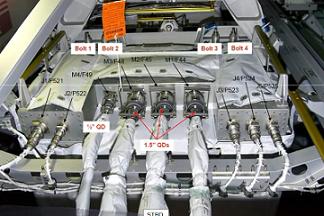 Drew then left Bowen to perform the final 15 minutes of the Pump Module stowage ops by himself. During this time, Drew moved to the APFR from ESP-2 to the Z1 truss and work on the MLI (Multilayer Insulation) blankets on the Z1.

Three hours 30mins into the EVA, Bowen was scheduled to complete Pump Module activities and perform ~30mins of SSRMS cleanup operations. This took slightly longer due to a failure of the Cupola Robotic Work Station (RWS).

Meanwhile, Drew relocated a tool stanchion from APFR to the Quest Airlock.

Bowen and Drew then began the one hour CP3 camera wedge installation operation before moving on to optional “get ahead tasks” and then JAXA’s (Japan Aerospace Exploration Agency) Message in a Bottle task.

With Bowen saying “let’s get it done,” the get ahead tasks for EVA-1 relating to the Starboard CETA cart rail stub installations was completed prior to clean up. The stowage of the S3 Mobile Transporter Stop & Tether Shuttle Stop was also completed.

The six hour 43 minute spacewalk wrapped up with EVA cleanup and Airlock ingress options.  Following ingress, the Airlock will be repressurized and post-EVA servicing will begin.

A wrap up ISS daily planning conference will then take place at ~1900 EST. ISS crew sleep will then begin at 2120 EST followed by Discovery crew sleep at ~2153 EST.

Endeavour’s Quarter-mile Trip to the VAB – A Small Trip for a Big Mission: 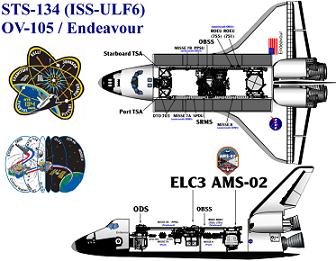 With sister Discovery conducting her capstone mission at the ISS, orbiter Endeavour is in the process of being rolled to the VAB for mating with External Tank 122 (ET-122).

As has been the custom of late, Endeavour was rolled three-quarters of the way down the transfer road from her OPF (Orbiter Processing Facility) to the VAB and then stopped for several hours to allow her processing team, KSC workers, and media representatives the chance to revel in her glory, reflect on her career, and spend some precious time with youngest orbiter in NASA Shuttle fleet.

Tasked with the longest and most-complex of the final vehicle flights, Endeavour’s STS-134 mission will deliver two major cargo elements to the International Space Station, among which is the Alpha Magnetic Spectrometer: the keystone scientific experiment for the orbital laboratory complex. 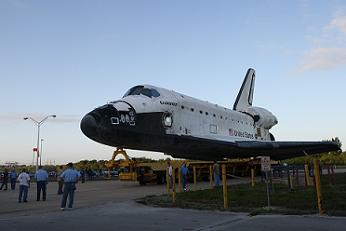 Highlighting the amazing nature of the orbiter Endeavour and the care and dedication of her workforce, Endeavour began her roll to the VAB this morning with the lowest number of IPRs (In Process Reviews) of any orbiter for any OPF flow in Program history; only 19 IPRs were recorded during Endeavour’s entire OPF flow which began upon JSC handoff to KSC upon her landing on STS-130 on February 21, 2010.

Further emphasizing this outstanding vehicle is the fact that her 19th IPR was recorded on November 24, 2010 – a full three months before her final OPF flow ended.

In preparation for this morning’s rollover, Endeavour’s processing team completed all OPF work a week and a half ago, mating Endeavour to the Orbiter Transport System – a 72-wheeled vehicle specially designed for transporting the Shuttle orbiters – on February 15 and performing final landing gear retractions for flight on Feb. 16.

In the final days before Endeavour was mated to the OTS, her technicians and engineers performed final testing on her Internal Measurement Units (IMUs) and her Microwave Scanning Beam Landing System (MSBLS). Final MEDS (Multifunctional Electronic Display System) calibrations and weight & Center of Gravity calculations were also performed prior to OTS mate.

But Endeavour was not the only element of the STS-134 vehicle undergoing final preparations and work during the month of February; Endeavour’s External Tank, ET-122, was put through the wringer as dozens of MAF (Michoud Assembly Facility) engineers converged on the tank to perform the same Radius block installations to its LOX/intertank flange stringers as was performed on ET-137.

This work on the tank was completed last week, exactly as tank engineers said it would be.

Later today, Endeavour will be connected to the hoisting/mating sling, demated from and lifted off the OTS, positioned vertically, rotated 45-degrees, lifted up and over the VAB transom into High Bay 3, and then lowered beside her ET/SRB stack.

Endeavour is scheduled to spend a total of 10 days in the VAB undergoing mating and stack checkout out ops. Rollout to Pad-A is scheduled for the evening of March 9 at 2000 EST.