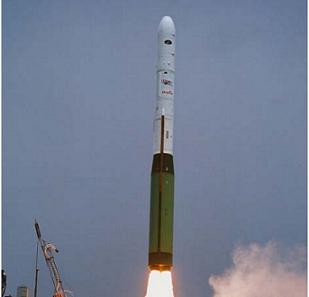 Orbital Sciences Corporation have launched a Minotaur I from Vandenberg Air Force Base in California on Sunday, carrying a classified technology development satellite for the United States National Reconnaissance Office. The mission, designated NRO Launch 66, was re-scheduled from Saturday due to technical issues. The second attempt – despite a media blackout – appeared to be successful, lifting off at 12:26 UTC (04:26 local time).

The payload of the launch is a classified spacecraft known as the Rapid Pathfinder Program (RPP). It is part of an NRO technology development programme initiated in 2009 to increase levels of research within the agency. It is likely to enter a polar or sun-synchronous low Earth orbit, suggesting that it will be used to test new optical or radar imagery systems.

It is unusual for the NRO to announce the name or mission of its spacecraft; this has only happened twice previously – the Space Technology Experiment (STEX) on NROL-8 in 1998, and GeoLITE on NROL-17 in 2001. Both of these missions were also technology development missions, although in both cases more details on the nature of the experiments aboard the spacecraft were provided than with today’s mission.

The Minotaur I rocket is a four stage all-solid expendable launch system developed and operated by Orbital Sciences Corporation (OSC). It was derived from the retired LGM-30F Minuteman II missile, which was developed in the 1960s as an upgraded version of the earlier Minuteman I.

The Minuteman II made its maiden flight in September 1964 and its final operational test launch in November 1987. Forty eight rockets were built for the development programme, followed by 620 production models, for a total of 668. The Minuteman II flew 181 times, with four failures.

The Minuteman II was a three stage rocket, consisting of an M-55E1 first stage, an SR-19 second stage, and an M-57A1 third stage. The Minotaur II reuses the first and second stages, with an Orion-50XL motor replacing the M-57A1 as the third stage, and an Orion-38 being added as a fourth stage. The use of a Hydrazine Auxiliary Propulsion System (HAPS) fifth stage has been proposed, but no launch in this configuration has yet been made.

The flight profile for the launch has not been announced, however all Minotaur I launches follow roughly the same sequence of events. The flight will begin at T-0, when the first stage will ignite and the rocket will begin to climb towards orbit. The first stage will burn for 61.3 seconds before burning out and separating. The second stage will ignite immediately. A little over seventeen seconds later, the interstage which connected the first and second stages will be jettisoned from the second stage. The payload fairing will separate 123.3 seconds after launch.

Just over 128 seconds into the flight, the second stage will burn out and separate, ending a 65-second burn. Around two seconds later the third stage will ignite and burn for 73 seconds. The rocket will then enter a coast phase. The exact duration of this phase is unknown, and varies depending on payload requirements. 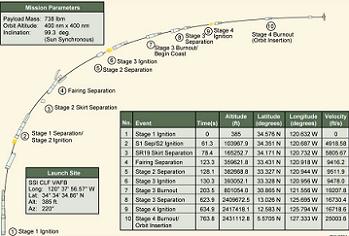 The exact target orbit for this launch is unknown. NOTAMs issued to keep aircraft away from areas where the first and second stages of the rocket are expected to fall show that the Minotaur will fly south, and slightly west, from Vandenberg.

Assuming that it does not make a dog-leg, this would suggest that it is heading towards a slightly retrograde sun-synchronous orbit. The other possibility is that it could dog-leg into a polar orbit, however this is unlikely. The Minotaur User Guide gives a typical mission profile as placing a 335 kilogram payload into a 741 kilometre circular orbit inclined at 99.3 degrees. 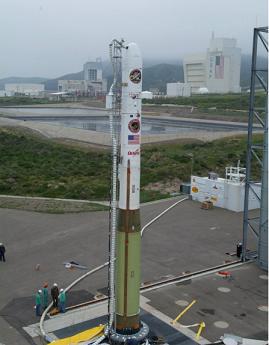 The Minotaur will launch from Space Launch Complex 8 (SLC-8) at the Vandenberg Air Force Base in California. SLC-8 is operated by Spaceport Systems International, having been built in the late 1990s as part of the California Spaceport.

This is the ninth launch from the pad; six previous Minotaur I missions and two Minotaur IV launches have used the facility. The most recent launch was of a Minotaur IV carrying the SBSS-1 satellite last September. This will be the first Minotaur I to launch from Vandenberg since 2006.

The comparatively short development time of this mission, combined with it having the highest launch number of any payload so far, suggests that the order of the designations may be related to the order in which the spacecraft are procured.

The first mission with an NROL designation was NROL-2, launched using a Titan IV(403)A on 20 December 1996. It carried an Improved Crystal imaging satellite, similar to the one launched last month atop a Delta IV. On early missions, the designations were not well publicised, and consequently there is some confusion over which designations were associated with which launches. Although a list has been complied associating each designation with a specific launch, some information is based on conjecture, rumours, and unknown sources. The identities of the NROL-3, 7, 8 and 9 missions are particularly uncertain.

NROL designations have been applied to all NRO payloads launched since December 1996, with the exception of the two QbX CubeSats launched in December 2010. Many different types of satellite have been launched under the designations. In 1997, two NROL missions were launched: The second launch under the system was of a Lacrosse radar imaging satellite, tentatively identified as NROL-3, whilst the third, NROL-4, put a Trumpet electronic intelligence (ELINT) satellite into orbit.

Four NROL launches occurred in 1998, beginning with NROL-5, also known as “Capricorn”, in January. This placed the first SDS-3 communications satellite into orbit. The next launch, NROL-6, orbited a “Mentor” geosynchronous ELINT satellite. This was followed by what currently remains the only outright launch failure of an NROL mission, when the last Titan IVA launch, believed to have been designated NROL-7, was destroyed by range safety during an attempt to place a Mercury signals intelligence satellite into orbit. NROL-8 saw a Taurus 1110 rocket place the Space Technology Experiment satellite into orbit.

In 1999, NROL-9 saw the launch of a stealth reconnaissance satellite, later known as USA-144. The spacecraft has been identified as either being the second Misty satellite, or the only Enhanced Imaging System spacecraft to be launched. This was followed by two launches in 2000; NROL-11 placed another Lacrosse satellite into orbit, and NROL-10 saw an Atlas IIAS launch another SDS-3 spacecraft.

Four launches followed in 2001, starting with NROL-17, the GeoLITE experimental communications satellite, on a Delta II. NROL-13 then placed the first pair of NOSS-3 satellites into orbit, before NROL-14 put up another KH-11. The last NRO Launch of the year, L-12, orbited a third SDS-3 satellite.

No launches occurred in 2002, and in 2003 a Titan IV launched another Mentor satellite for NROL-19, followed by a second NOSS-3 launch, L-18, on an Atlas IIAS. In 2004 the last Atlas IIAS launched a fourth SDS-3 payload on the out-of-sequence NROL-1 mission. Three NROL missions were launched in 2005, beginning with NROL-23 in February. The last launch of the Atlas III rocket placed a third pair of NOSS-3 satellites into orbit. In April the NROL-16 mission saw the launch of the fifth and apparently final Lacrosse satellite, and in October the last Titan IV launched on the NROL-20 mission, deploying a KH-11. 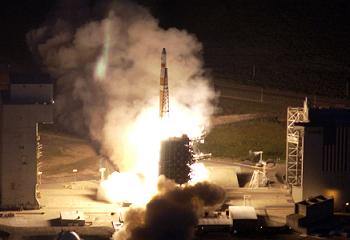 2006 saw two further launches, the first being NROL-22 aboard a Delta IV-M+(4,2). The first NRO payload to use an Evolved Expendable Launch Vehicle, an electronic intelligence satellite was deployed into a highly-elliptical ‘molniya’ orbit.

The satellite has been identified as either a continuation of, or a replacement for, the Trumpet spacecraft. The second launch of the year was NROL-21, on a Delta II. Believed to be a technology development satellite or a prototype radar imaging spacecraft, the satellite failed within hours of launch, and was subsequently destroyed by a missile in 2008.

In 2007 two more launches were conducted, both using Atlas V 401s. The first was NROL-30, with a pair of NOSS satellites. This launch was a partial failure, delivering the spacecraft to a lower than planned orbit, however they were able to manoeuvre into the correct orbit under their own power. The second launch of the year, NROL-24, saw a fifth SDS-3 satellite reach orbit. In 2008, the only NRO payload to be launched was NROL-28, another satellite in the Trumpet series or its successor.

A Delta IV Heavy launched a Mentor satellite in 2009, in a launch designated NROL-26. Last year, two further launches were conducted, the first being an Atlas V 501 with the NROL-41 spacecraft; the first in a series of radar satellites to replace the older Lacrosse spacecraft, developed as part of the Future Imagery Architecture programme. NROL-32 was launched in November with another Mentor. The most recent NROL mission was launched last month, when a Delta IV conducted the NROL-49 mission, deploying another KH-11 satellite.

The next launch of a Minotaur I is scheduled for April, when the ORS-1 satellite will be launched from the Mid-Atlantic Regional Spaceport. The next launch to be conducted by Orbital Sciences is expected to occur later this month, when a Taurus-XL 3110 will launch the Glory satellite for NASA, along with three CubeSats. That launch will also take place from Vandenberg.