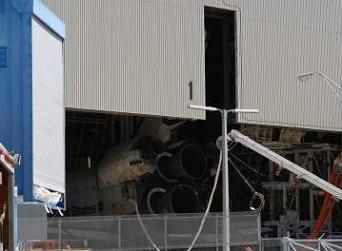 As the future of NASA’s budget finds itself under scrutiny again this week, managers have told their workforce that STS-135 will fly “regardless” of what happens with the funding situation via the Continuing Resolution (CR). Atlantis’ preparations for the final flight of the Space Shuttle are continuing without issue, as managers debate the payloads which will ride to the International Space Station (ISS).

Atlantis is being processed inside her OPF-1 (Orbiter Processing Facility) for a launch date target which will fall in either late June or early July, with the potential of slipping yet further to allow for the full range of Orbital Replacement Units (ORUs) – some of which are not scheduled to be ready in time for the current target of late June – to ride uphill on the mission.

Even though she’s a few months from rollover to the Vehicle Assembly Building (VAB), a large amount of work is being carried out on the orbiter.

Also, a large amount of Thermal Protection System (TPS) work is being carried out at this stage of the flow – even though she returned from her STS-132 mission relatively unscathed from her trip to the ISS.

Notably in the recent flow, it was around the time of dedicated hydraulic operations to retract the LMLG (Left Main Landing Gear) to support TPS work earlier this month when Atlantis had to be put through an emergency power down.

“The vehicle was powered up but then had to be powered back down for an evacuation of the bay due to a facility natural gas line break at the MFF Cafeteria. The OPF was in the downwind corridor of the gas leak,” noted the NASA Test Director (NTD) report at the time (L2).

“(Workers) were evacuated to Marshalling Area 1 for personnel accountability due to the smell of natural gas in those facilities. Personnel were instructed to shelter-in-place until the situation could be resolved. Security also established road blocks and control points in the surrounding area.

“City Gas representatives were on site and discovered a cut in a 2” gas line located on the North side of the MFF cafeteria. City Gas isolated the leak and repaired the gas line. At 1045 EST the natural gas service was restored. The evacuation of OPF-1, however, did require the test team to perform an emergency power down on OV-104 (Atlantis). OV-105 (Endeavour) in OPF 2 was not powered up at the time of the incident.”

Atlantis has a low number of Interim Problem Reports (IPRs) to her name for the STS-135 flow, the latest of which “Retract motion of LO2 ET (External Tank) actuator not verified: SCAN retest was completed with nominal results” has been closed. 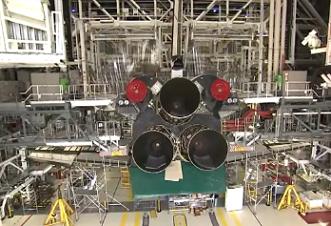 The latest item of interest impacted Discovery out at Pad 39A, as engineers noticed issues with the fasteners on Atlantis’ SSME dome heat shield. Issues were also found on Discovery’s fasteners upon inspections out at the pad and are currently under investigation for corrective work.

“Fasteners on all six SSME dome heat shield splice lines were discovered to be loose. Four of the six locations had soft goods in the load path. Nothing unusual was noted during installation and paper verification indicates torque was initially in spec,” noted the NTD report on the observations made on Atlantis.

“As a result, all of the splice plates will be checked for loss of torque using a dial type torque wrench. The splice line plates will then be removed and replaced taking extra care to not have any of the blanket or soft goods in the load path.”

Atlantis’ tank – ET-138 – continues to be checked out in the VAB’s High Bay 2E (HB-2E), ahead of what will likely be modifications via radius blocks of its stringers, a procedure which was completed on ET-137 and is currently in work on STS-134’s ET-122. 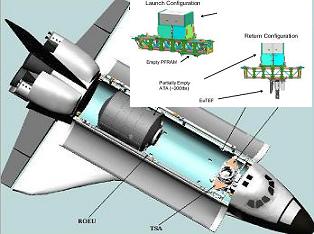 NASA managers have made no secret about the challenges of finding the required funding to execute the mission, although the workforce were reassured that despite of the monetary uncertainty, STS-135 will have the money in place “regardless” of the continued political evaluations.

“Regardless of what happens with the budget Continuing Resolution (CR), STS-135 will be funded,” noted a short note to the workforce last week. “A letter to that effect is expected.”

From a payload refinement standpoint, managers are continuing to evaluate just how much they can add to Atlantis’ upmass via trade offs, taking advantage of what is technically an additional mission on the manifest – one which will aid the ISS’ short term and long term future.

“On STS-135, at the (planning team meeting), two additional powered middeck payloads were added, bringing the total up to six powered payloads,” noted Flight Operations & Integration on recent documentation (L2). “On the robotics refueling payload for STS-135, there was an issue with thermal vac. They are off assessing this. A two-week hit is estimated.” 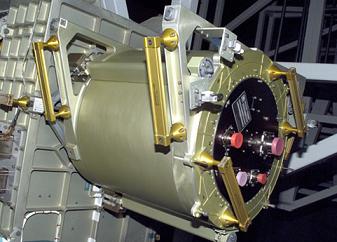 However, from a downmass standpoint, it appears the potential return of BRRM motor component of the 2A Beta Gimbal Assembly (BGA) is now off the cards for Atlantis.

“The 2A BGA BRRM R&R assessments going to the SSPCB (Space Station Program Control Board). The technical community plans to recommend not going it,” noted MOD (Mission Operations Directorate) comments from the 8th Floor update (L2), which also added how the launch date remains fluid.

“Coordinated the MOD position, which is that if it is approved, it should be done at the end of June or in early July, meaning ULF7 (STS-135) should be pushed back at least a few days from the current 6/28 launch date. “

The desire to return the hardware related to ISS managerial comments about the interest in “getting the unit home for analysis and refurbishment and installing a pristine unit with no liens on its performance.” However, it appears the schedule does not match that of Atlantis’ mission, nor has the hardware been showing signs of an imminent need for replacement.

“BMRRM refurbishment for a spare is estimated to be complete by March 2012, with some uncertainty in the schedule,” added SSPCB notes (L2). “The Program would like to accelerate the schedule for a spare to November 2011.

“Over the last three years, since there has not been any change in performance and we know how to account for high Beta LS with array parking, the Program concurs that we can continue with our current mitigation strategy and a BMRRM R&R is not currently needed at this time.”

Other considerations for STS-135 include the emotional element, with an obvious need to cater for the increase in public interest during the last ever shuttle mission.

“The STS-135 team is working hard on a couple of items, including timeline, power usage, and payload complement options and trades, and a request from Shuttle Program Management for additional PAO event time during the mission,” added Flight Director Kwatsi Alibaruho.

“The team has already incorporated the PAO event requests received from Rob Navias/PAO, but will work to accommodate additional PAO events as-needed.”