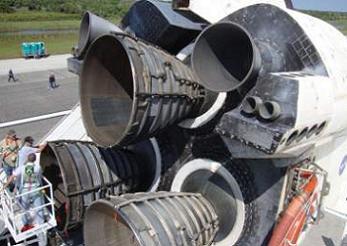 Discovery has completed her final – and flawless – mission in space with a return to her home port of the Kennedy Space Center (KSC) in Florida. Two KSC opportunities existed on Flight Day 14 (End Of Mission), but excellent weather in Florida allowed a go for the deorbit burn to be given, prior to a perfect return. Discovery’s final clearance from a Thermal Protection System (TPS) standpoint came on Tuesday, as imagery showed the orbiter has a near pristine heatshield.

Following Flight Day 13’s checkout of the systems Discovery will use to aid her return, the veteran orbiter is scheduled to depart from her Low Earth Orbit (LEO) playground with only 10 MER (Mission Evaluation Room) items to her name – most of which are not system related from an engineering standpoint.

She suffered zero issues that required any level of evaluation from the Mission Management Team (MMT).

The latest of the minor issues came after the power up of Auxiliary Power Unit 1 (APU1) for the checks on the orbiters Flight Control Surfaces (FCS) and the Reaction Control System (RCS) hotfire task – ensuring all 38 of her primary jets are in working order – when a hiccup was noted on ATVC (Ascent Thrust Vector Control) Channel 1’s Power Supply, which failed to restart during cycling.

Commands from the guidance system are transmitted to the ATVC drivers, which transmit signals proportional to the commands to each servoactuator of the main engines and SRBs.

In the case of STS-133 – and its use during the return to Earth – the ATVC is responsible for repositioning the SSMEs to allow for the drag chute to be deployed without catching on the SSME bells, and also post landing, allowing the SSMEs to position for post flight operations on the Shuttle Landing Facility.

The ATVC in question did soon return to a nominal state, although the system involves four independent flight control system channels and four ATVC channels – meaning the system is quad redundant even in the event of a problem.

With the weather looking great in Florida, the de-orbit burn was given a go for the first KSC landing opportunity, with the deorbit burn following at 1052 EST. Discovery’s landing at KSC was perfect at 1158 EST.

More will follow, and Discovery’s post flight time at KSC will be covered throughout (next article this week) – refer to the live event thread for live information.

With Discovery ready to come home, her Thermal Protection System (TPS) is ready to protect her from the scorching 2,500-degree temperatures she will battle as she makes her way to Florida. 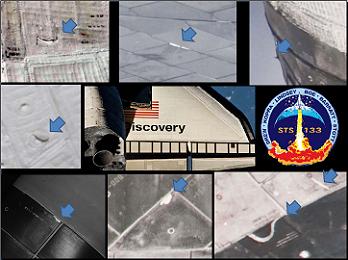 To ensure that the TPS is in the best possible condition (health), a team of imagery and TPS experts conducted a thorough and inspiring review of numerous images obtained of Discovery’s RCC (Reinforced Carbon-Carbon) Wing Leading Edge and nose cap panels, flight control surfaces, and underbelly TPS tiles during the first two days of the STS-133 mission.

This quick clearance of any major or concerning damage locations on Discovery not only highlighted the amazing job of the DAT but also of the Michoud Assembly Facility (MAF) workforce who has been unbelievably successful in eliminating large-scale and potentially damaging foam releases from the External Tank.

To the end, the DAT included in their presentation a specific reference to the foam loss event witnessed at T+3mins 50secs: “No indication of damage at point of initial contact or rebound contact” of External Tank foam. “Based on comparison to previous impact testing, higher impact energy would be required to initiate in-plane tile cracks.” 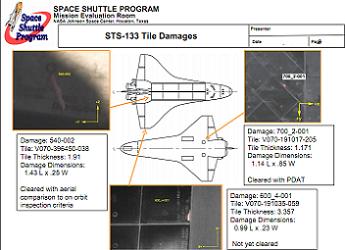 No in-plane tile cracks were observed on RPM photography.

Moreover, there was only 1 (yes, one) TPS underbelly tile that received very, very, very MINOR scuffing.

In all, only 8 items were recorded for TIIMS evaluation: 2 lower surface features (one TPS tile scuff and one protruding AMES gap filler) and 6 upper surface features (including a protruding gap filler, a nicked OMS pod TPS tile, a Forward RCS thermal barrier protrusion, a tile nick near an RCC panel on the wing tip, the partial loss of a FI blanket, and a slightly lifted FIB sleeve).

For the two lower surface features, the AMES gap filler was quickly identified as one that was installed following the 14th flight of Discovery in the mid-1990s and one that has since flown with her for her last 25 missions.

The gap filler, which is 1.3-inches tall and 3 plies thick, is currently protruding from Discovery’s surrounding TPS tiles by 0.29-inches (+/-0.1-inches) as observed through the assessment of 1000mm images. 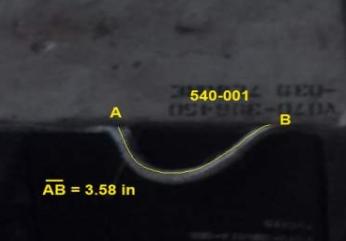 All predicted early transitions for this gap filler are bound by the previous Mach 18 assessment. As related by the master FD-6 DAT assessment presentation, available for download on L2, “Thermal bounded by previous analysis that showed transition at Mach 18 acceptable in this area. Partial transition load comparison based on aeroheating heat loads.”

Nonetheless, a “partial transition analysis” was performed with “Mach 5 and Nz2.0-6fps load conditions at Nominal, Mach 18, Mach 21, and Mach 25 heating.”

This testing confirmed that a partial transition will affect areas of Discovery’s right main landing gear door, wing, and aft fuselage but that all safety margins remain well within the positive range.

There is no predicted TPS or structural over temps as a result of this gap filler, and there are no concerns for reentry.

Similarly, the only other lower surface area to gain attention was on one TPS tile.

Switching to the upper surface areas of the review, the first TPS tile damage location was noted on the right OMS pod. This tile was found to contain a 1.43-inch long x 0.25-inch wide scar. The site was quickly cleared with “area comparison to on orbit inspection criteria,” notes the master DAT presentation. 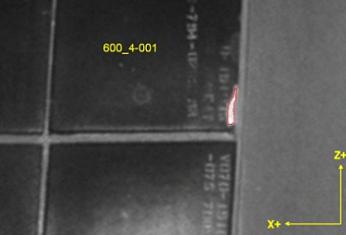 Likewise, the last of only three tile damage locations was found to have a 0.99-inch long x 0.23-inch wide defect. Cleared by “comparison to heat load from nearby lower surface tile location,” the area was found to have no damage over the structural bond line and to be thicker than and receive one-fourth of the heating than its comparison tile.

Also affecting the upper surface of Discovery was a protruding gap filler sleeve. “Protrusion limited to OML sleeving of design gap filler” with “17 of 21 inches of stitch line remain intact.”

This protrusion is similar to ones observed on previously flights with the body of the gap filler continuing to seal the tile-to-tile gap, thus maintaining primary sealing.

This particular gap filler was installed in May 2009 using new procedures including an increased pull load requirement and an increased allowable recession. 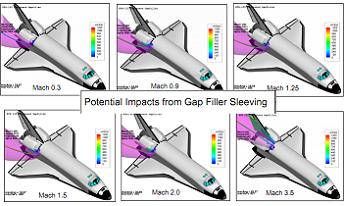 A potential cause for this gap filler sleeve’s protrusion was preliminarily traced to the removal of an adjacent carrier panel during the right OMS pod’s flow for STS-133.

The protruding sleeve is not expected to liberate during reentry since ascent loads in this area are three (3) times higher than entry loads.

However, should it liberate, the possibility exists that it could impact the Rudder Speedbrake (RSB).

But even if this unlikely scenario were to play out, the analysis community is highly confident that the RSB would be largely unharmed and that any impact to the RSB would not compromise the crew’s ability to safely land Discovery. 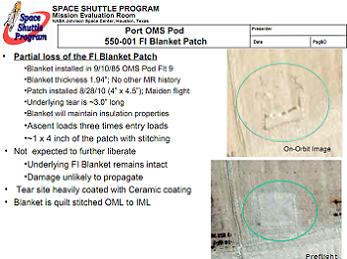 Likewise, the next area of analysis on the upper surface also yielded positive safety margin results for the potential (though unlikely) liberation event of a portion of an FI blanket patch, which is located on the port OMS Pod.

As noted by the DAT assessment presentation, the blanket will still maintain its insulating properties even in its damaged condition and is not expected to liberate during reentry since the “tear site is heavily coated with Ceramic coating and the blanket is quilt stitched OML to IML.”

This is also a good example of just how minor the items of interest were for the DAT engineers during STS-133. 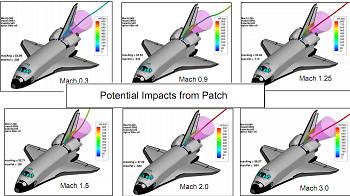 Again, should the remaining portion of the patch liberate (unlikely), potential damage to the surrounding TPS and the “face sheet/core” of the RSB is possible, but not enough to prevent the perfectly safe execution of landing ops.

The fourth item of interest on Discovery’s upper surface was a frayed patch on the F4R thruster. As noted by the DAT, the frayed thruster patch is protruding by ~0.49-inches, but the “Thermal barrier will continue to provide compression between tile and thruster.”

No liberation or propagation of this damage is expected since ascent loads in the area are twice as high as entry loads.

Lastly, a lifted FIB sleeve was observed on the vehicle. The sleeving is securely and the DAT is confident that it will not liberate during entry since the entire perimeter is stitched through the blanket.