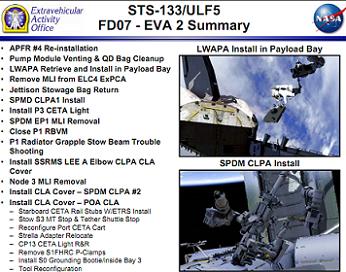 The STS-133 crew are working through their second and final spacewalk dedicated to several misc. tasks that will help place the International Space Station in the best possible shape for future construction missions as well as the post-Shuttle era. Meanwhile, thanks to Discovery’s excellent performance, the Mission Management Team (MMT) have discussed adding a second extra day to the docked mission (UPDATE – APPROVED).

Discovery’s final mission could not be going smoother, with the Mission Evaluation Room (MER) working no issues, with only a very short list of minor items of interest since she launched last week.

Aided by an overview by the Damage Assessment Team (DAT) – which shows Discovery’s Thermal Protection System (TPS) is in a pristine condition – the Mission Management Team (MMT) officially cleared the orbiter for Entry during Flight Day 6.

“MER Items: None. At yesterday’s MMT (FD 6), Discovery’s TPS was cleared for re-entry. The first landing opportunity at KSC is targeted for Tuesday, March 8 at 11:36 EST,” noted the MMT (L2), prior to new information on Flight Day 7 pointing to a potential extension of an additional day – not long after the original plus one day was added to allow for additional outfitting and transfers relating to the PMM (Permanent Multipurpose Module) Leonardo.

The ability, for what would effectively be the addition of two full days to the original flight plan, is based partly on the performance of Discovery’s Fuel Cells, and mainly on the load in the PRSD (Power Reactant Storage and Distributation) tanks.

Discovery is also aided by the Station-to-Shuttle Power Transfer System (SSPTS), which allows for a lower demand on the fuel cells to consume the LOX/LH2, allowing the consumables last longer whilst docked.

With engineers continuing to monitor the usage rate, they can project how much time is available beyond what the baseline mission calls for, both with SSPTS and without SSPTS, with O2 generally the limiting factor. Such data is updated daily, allowing the MMT to decide on the best use of Discovery’s capabilities.

Any formal decision from the MMT – was expected on Thursday. (Thursday UPDATE: Decision – Approved).

After waking up at 0524 EST to the song “Speed of Sound” by Coldplay, a song played for Discovery’s all-star pilot Eric Boe, the combined Discovery/ISS crew got right to work this morning preparing for not only the mission’s second EVA (spacewalk), but also the internal configuration and transfer of item from the newest ISS module, Leonardo, to the Space Station.

After completing all their normal pre-EVA tasks – bar a slight delay relating to a damaged O-ring on one of the CO2-scrubbing LiOH canisters on Steve Bowen (EV 1) suit, the veteran spacewalker joined Al Drew (EV 2) into the Quest airlock, took their EMUs (Extravehicular Mobility Units) to battery power and officially began the last spacewalk to be hosted by astronauts from Space Shuttle orbiter Discovery.

With the official start time listed as 1042 EST, the duo followed egress with a 30-min setup period. Bowen and Drew then split up for a vast majority of the EVA.

For Bowen’s specific tasks, the veteran spacewalker first translated to the SSRMS (Space Station Remote Manipulator System) and spent an hour setting up and ingressing the foot restraint.

Then, approximately 1.5 hours into the spacewalk, Bowen maneuvered to the Columbus laboratory where he will spend ~30mins retrieving the LWAPA from the outside of ESA’s (European Space Agency’s) module. 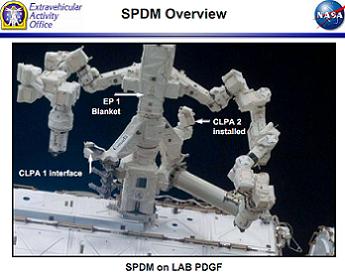 After then taking about ~30mins to install the LWAPA, Bowen moved to Dextre, the Special Purpose Dexterous Manipulator from the Canadian Space Agency, to install the CLPA 1 (Camera Light Pan and Tilt Assembly 1).

Bowen continued his work on Dextre by removing the EP1, while evaluations took place inside the the ISS Flight Control Room (FCR) on the possibility of adding a quick task to return to the CP3 Camera Wedge – part of EVA-1 – to remove the obstruction of a misaligned black sun shade, which has been found to enter into the view of the camera lens. That task was successfully completed without issue.

Following his work on Dextre, Bowen moved to a different work station where he will begin an hour-long cleanup effort on the SSRMS to remove the foot restraint and returned the arm to its pre-EVA configuration.

Bowen’s final primary task with the SSRMS will be to install a CLPA cover onto the arm.

As time permitted, Bowen then performed the “get-ahead” tasks on the P1 Radiator Grapple Stow Beam before performing one final task with Dextre: installation of a CLPA thermal cover. 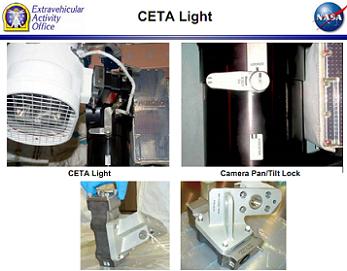 Drew picked up the JSB as he translates to the P3 truss CETA cart area to install a light – an hour-long procedure.

Next, Drew installed a CLA thermal cover on a POA.

With Bowen working MLI on Node 3, Drew noted his helmetcam and lights package had come loose from his helmet. Bowen translated to Drew’s position and attempted to reattach the hardware. This effort failed, leading to the call for Drew to teminate his EVA – as much as it was very near the scheduled end – as Bowen returned to his final task, to relocate a Strela Adaptor.

The final 30mins of EVA-2 was spent performing EVA cleanup activities and verifying that all materials and tools had been retained and not floated off unnoticed into space. The EVA officially ended at 1656 EST.

After re-entering the Quest Airlock of the ISS, Bowen and Drew’s spacesuits were deserviced and an ISS daily planning conference took place at ~ 1805 EST.

The ISS crew then headed to bed at 2020 EST, followed by the Discovery crew at ~2053EST, prior to heading into a day mainly taken up by continued outfitting the PMM, a call from President Obama and some well deserved off-duty time. See live thread to review Thursday’s activities.

(Numerous articles will follow. L2 members refer to STS-133 live coverage sections for internal coverage, presentations, images and and updates from engineers and managers – which is now into full and extensive live Flight Day coverage during the mission. Images used: Lead via NASA.gov. Graphics via L2).