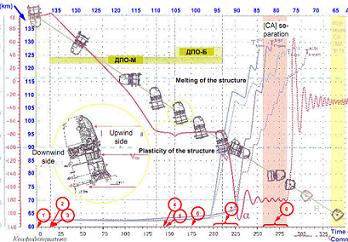 Expedition 26 commander Scott Kelly, along with Russian flight engineers Oleg Skripochka and Alexander Kaleri, have returned to Earth, following a nominal re-entry of their Russian Soyuz TMA-01M spacecraft. The trio landed in horrendous weather conditions in Kazakhstan, resulting in a speedy evacuation by helicopter.

The trio launched aboard the Soyuz TMA-01M spacecraft from the Baikonur Cosmodrome in Kazakhstan on October 8, 2010. As members of the Expedition 25 and 26 crews, they spent 159 days in space, 157 of them aboard the station. It was the debut mission for the latest version of the Soyuz.

During their mission, the Expedition 25 and 26 crew members worked on more than 150 microgravity experiments in human research; biology and biotechnology; physical and materials sciences; technology development; and Earth and space sciences.

In preparation for entry, the crew were already wearing their Russian Kentavr anti-G suit under their Sokol suits and had already ingested fluid-electrolyte additives to prepare their bodies for the rigors of returning back into Earth’s gravity. The vehicle undocked from the ISS at 4:24 am GMT.

Once back in the atmosphere, the pilot parachute (0.62 and 4.5 square meters), drogue chute (16 sq.m.) and main (518 sq.m.) chutes slowed the vehicle’s decent. Just before the landing six small rocket engines behind the heat shield fired, resulting in a landing speed of 6-7 meters per second, slowed down to 1.5 meters per second by the retro fire.

Airplanes and helicopters were already on duty around all estimated landing spots – 12 in total – covering the nominal landing zones, and also at greater distances, in the event of a ballistic landing.

The trio landed about 80 km away from Arkalyk, Kazakhstan, at 7:53am GMT. Terrible weather conditions greeted them, with deep snow and freezing winds, as the capsule landed on its side, before being dragged along by its parachutes by 25 yards. However, it was classed as a bullseye landing.

As noted, the Soyuz is capable of two Entry modes, the latter of which is an “off nominal” ballistic return, which some Russian media had noted was a likely scenario for the debut return of Soyuz TMA-01M, citing unknown NASA sources and with relation to the new Digital upgrades on the vehicle.

The previous ‘off nominal’ re-entries – in 2007 and 2008 – were caused by separation failures on the modules, thus initiating the ballistic return for their three person crews, resulting in up to 10G+ for periods of re-entry. However, a new cause for a ballisic re-entry did not materialize, as the vehicle performed without issue.

This results in a continuation of no issues being suffered with the vehicle since an investigation found that the most likely cause of the previous failures related to an open the latch located at ‘Plane I interface’, much to the relief of all concerned, not least NASA, who will be relying on the Russian vehicle for several years after the retirement of the space shuttle.

As mentioned, NASA will become a major customer of the Soyuz shortly, as the final two missions prepare for launch from the Kennedy Space Center (KSC). Just this week, NASA signed a $753 million modification to the current International Space Station contract with the Russian Federal Space Agency for crew transportation, rescue and related services from 2014 through June 2016.

Meanwhile, next launch of the Soyuz has been delayed – a rare situation for the Russians – due to issues with the Kvant-V communications system on the Soyuz TMA-21. The March 29 lift-off – carrying NASA’s Ron Garan, along with Russian cosmonauts Andrey Borisenko and Alexander Samokutyaev – has yet to receive a new launch date.