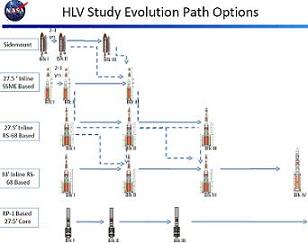 With a Shuttle Derived (SD) Heavy Lift Launch Vehicle (HLV) still leading the way via ongoing evaluations into the configuration of the Space Launch System (SLS), an evolvable vehicle – which can be delivered on time and on cost – is undergoing final refinements. It is understood that the only real competitor at this stage is based around a Saturn V heritage HLV, using LOX/RP-1-powered F-1 engines.

Finalizing a vehicle which will become the centerpiece of NASA’s future is being undertaken by a large set of people, centralized at the Human Exploration Framework Team (HEFT) – now renamed to Human Exploration Architecture Team (HEAT) – with seven senior leaders from across NASA. 26 senior experts from across NASA and 100s of domain experts distributed across the NASA team are also involved.

With the Marshall Space Flight Center (MSFC) now housing the SLS Program Office, the Alabama center is central to the HLV design effort, which has been ongoing for some time – leading to a preliminary report which was angled to point out high level NASA managers felt they would not be able to achieve the vehicle on budget and by 2016 as ordered in the NASA Authorization Act.

Although this came as a surprise to a number of people working on the studies, it was also stressed the report was preliminary, ahead of the Spring final report – since delayed into the early summer months – which would refine their findings, with the key note that their work is yet to be completed on finding a number of get-wells on the cost of the SLS, which a SD HLV enables, including the discovery of”greater efficiencies” and even a potential change of design to the SD HLV.

Very little was noted in the weeks following the preliminary report, until recently when two vehicle options started to come to the forefront as the leading SLS candidates via the ongoing RAC (Requirements Analysis Cycle) team evaluations.

Spread out over three teams, the RAC-1 team are tasked with studying in-line, LH2 core vehicles with Solid Rocket Boosters (SRB). The team is allowed to trade Space Shuttle Main Engines (SSMEs) with RS-68s, while also trading SRBs with Liquid Rocket Boosters (LRBs), in order to ensure they have the best configuration to battle with the other HLV candidates.

RAC-2 are tasked with evaluating a Saturn V-type vehicle, utilizing an RP-1 first stage and LH2 second stage. Like RAC-1, the team was allowed to trade different engine options, within their designated configuration. RAC-2 included SpaceX’s Falcon XX – a huge vehicle powered by six Merlin 2 engines – in the trades.

RAC-3 studied vehicle designs based around several options, such as EELVs, with a large amount of latitude to study different tank sizes, including the evaluation of clusters of Atlas-sized tanks similar to how the Saturn IB first stage was built.

Although RAC-3 is still in work, two specific vehicle configurations from both RAC-1 and RAC-2 are being noted as the two leading contenders at this stage of the evaluations – which has around six weeks to run.

The In-line SD HLV is no stranger to the SLS studies and indeed holds a level of favoritism at several NASA centers and within the contractor community. 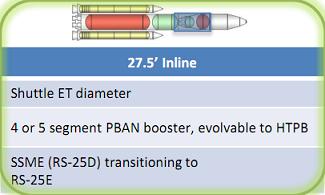 However, there has been some confusion over the requirements laid out in the Authorization Act, with the preliminary report appearing to claim the leading SD HLV candidate would not be able to fit into the affordability and schedule requirements outlined by lawmakers, due to being based around the 130mt configuration.

“The Act also directs NASA to begin development of the SLS vehicle ‘as soon as practicable after the date of the enactment’ of the NASA Authorization Act of 2010 and with the goal of achieving operational capability for the core elements not later than December 31, 2016.”

Per information gathered by numerous sources (L2), the Act’s language has now resulted in a more literal translation into an evolvable SD HLV, with the opening configuration satisfying the requirement of being ready for its manned debut in 2016.

Named as the Block 0 SD HLV SLS, the vehicle is based on two four segment SRB’s, three Shuttle SSME’s, a stock length ET (External Tank) based core – all very much in line with the current STS hardware – with Orion on top (no Upper Stage). Graphics of the vehicle – which are restricted from release at this time – show it to be very similar in appearance of the notional Jupiter 130 configuration. 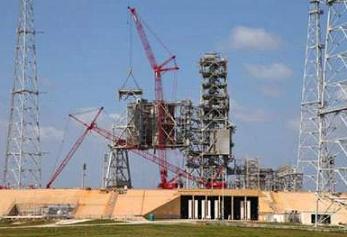 This 70mt-capable vehicle would be launched from a Shuttle Mobile Launch Platform (MLP), utilizing Pad 39A, with three “test flights” already given a preliminary schedule. The evolved SD HLV would then utilize Pad 39B – which is currently being dismantled into a “clean pad” – as per requested under the Constellation Program plans.

The third test flight would be targeted for December, 2016 – achieving the Act’s requirement on being ready to fly by the end of 2016, while sources note this schedule is deemed as “contingency heavy” – relating to lessons learned from the Constellation Program (CxP) slips to their internal schedule. A large – and honest – “lessons learned” presentation was also created by CxP recently (L2) – with an article to follow on its findings.

With the Block 0 achieving the Act’s main goal of providing support to the International Space Station (ISS), the configuration would then be evolved, on a schedule to be determined by NASA’s future missions – all the way up to a proposed 150mt vehicle, as NASA’s focus is placed on BEO (Beyond Earth Orbit) exploration in the next decade. 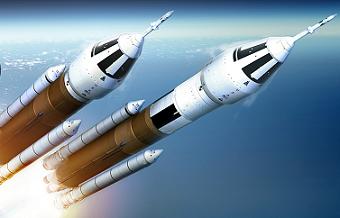 The Block 1 version of the SD HLV would sport five SSMEs, accompanied by two five segment PBAN steel-case SRBs, a stretched ET-derived core, but still without an Upper Stage. This vehicle would be capable of around 100mt.

The Block 2 evolution would retain Block 1’s configuration on the first stage, whilst debuting an Upper Stage powered by either three J-2X engines, or an air-start SSME – if available. This vehicle would be capable of around 130mt.

The Block 3 evolution would be based on a stretched ET, powered by five SSMEs, two five segment HTPB composite-case SRBs, and Block 2’s three J-2X engines configuration (or a single SSME) powered Upper Stage. This vehicle would be capable of around 150mt.

RAC-2’s leading vehicle configuration for the SLS is a Saturn V class vehicle, sporting a LOX/RP-1 first stage, with either a LOX/RP-1 or LOX/LH2 second stage. This vehicle is classed as being based around a highly extensible, adaptable and capable architecture, one which is very modular by design.

Indeed, it should be noted that the HEFT/HEAT evaluations are not just based around the HLV, but also the entire architecture of NASA’s future exploration goals. 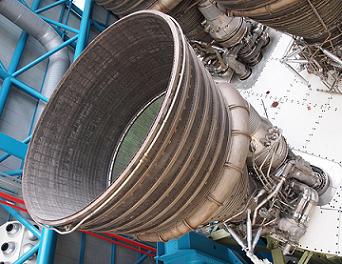 Less is known about this vehicle other than advances have been made in negotiating around the problem of the required new large LOX/RP-1 engine, by literally using what is understood to be a good quantity of unused F-1 engines from the Saturn V program for the opening flights.

Sources – notably from the “rival” RAC-1 camp – have claimed there would be problems with this configuration, centered on the certification of the heritage engine and the development of an all new airframe, although supporters of the RAC-2 candidate are buoyant about all aspects of the vehicle and the capability it would bring. 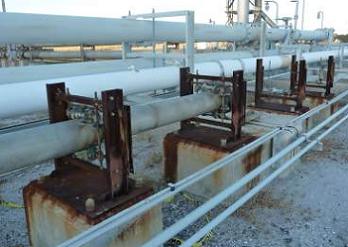 Some pad infrastructure also remains in place for this Kerolox option at the Kennedy Space Center (KSC), with the RP-1 fuel line abandoned in place for the last 30 years since the Saturn V last launched out of Florida.

However, recent photographs of the plumbing shows the supporting stanchions have suffered badly over the years – mainly from being exposed to SRB residue from the Shuttle launches.

This vehicle option also suffers politically, given it does not comply with the Authorization Act’s request to utilize Shuttle and CxP hardware, which was acknowledged by NASA’s preliminary report. “For the SLS, the Agency has decided to use a Reference Vehicle Design that is derived from Ares and Shuttle hardware, given the Congressional direction.”

The problem with the preliminary report’s RVD vehicle was the configuration they decided to show was unaffordable, one which utilized five RS-25 Space Shuttle Main Engine (SSME)-derived engines, five-segment solid rocket boosters, and a J-2X based Upper Stage for the SLS, using this to add the caveat that it wasn’t likely to achieve the Authorization Act’s goal of debuting in 2016.

Given the latest information on the SD HLV evaluations show the vehicle would be centered around being evolvable from the Block 0 configuration, it can be assumed – and indeed is stressed by sources – the vehicle now satisfies the Authorization Act’s language on utilizing Shuttle and CxP hardware, whilst importantly being available within the timeline and cost requirements.

However, the SD HLV has been classed as the favored option more than once over the past few years, before finding itself out of favor with the top end decision makers at NASA and within the US government, meaning nothing is certain until lawmakers receive NASA’s latest findings in the next few months, and receive it without numerous “anti-HLV” caveats.

(The progress on the SLS evaluations will be followed up over the coming weeks. Images used:  Philip Metschan (Jupiter), L2 documentation and NASA.gov (history)).