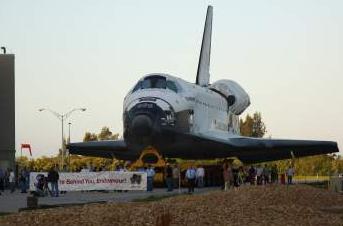 As preparations continue for Discovery’s departure from the International Space Station (ISS) on Monday, her younger sister, Endeavour, is deep into preparations to rollout to Pad 39A. Following Endeavour’s final rollover for the STS-134 mission, and indeed her career, mating operations between the orbiter and the stack are complete – although her Vehicle Assembly Building (VAB) operations have not been incident-free.

There are internal rumors from the European Space Agency (ESA) side that the current launch target of April 19 is expected to slip a few days due to unspecified issues with the AMS payload. However, no official information – or collaboration of the rumor – has been forthcoming from the US side. Any change will be updated immediately.

Endeavour rolled from her Orbiter Processing Facility (OPF) last Monday morning, a short trip which took several hours, in order allow members of her dedicated team to take photographs alongside the vehicle.

“OPF Rollout: Rollover first motion out of OPF-2 was at 0655 EST (Monday). The vehicle stopped in front of OPF-3 for photo opportunities before making its final journey into the VAB at 1050 EST,” noted the NASA Test Director (NTD) processing updates (L2).

Once inside the VAB, engineers were tasked with troubleshooting part of the large sling which is attached to the orbiter, allowing for two cranes to lift the vehicle vertical for the trip over from the transfer aisle into High Bay 3 (HB-3) – the location of the External Tank (ET-122) and Solid Rocket Boosters (SRBs). 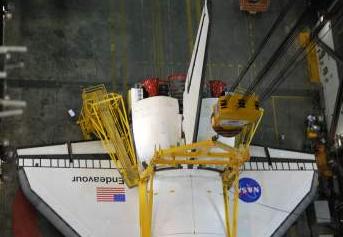 “S0004 Orbiter/ET mate: The vehicle was spotted in the VAB transfer aisle at 1113 EST (Monday). During sling attachment to the orbiter, binding was detected during mate of the right hand aft sling adapter. The sling was removed and the RH (Right Hand) aft cup was replaced.

“The sling was then mated without issue. The discrepancy was documented on the Problem Report (PR). Orbiter lift off of the OTS (Orbiter Transporter System) and rotate to vertical is complete. Removal of the aft spreader beam followed.” 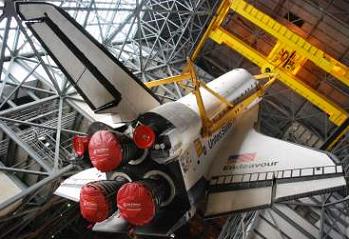 With Endeavour slowly lowered to her awaiting tank and boosters, mating operations began with soft mate and ordnance installation.

VAB platform extensions then surrounded the vehicle, allowing for access to Endeavour’s aft. It was during these operations when two accidents resulted in damage to two of Endeavour’s Space Shuttle Main Engines (SSMEs). 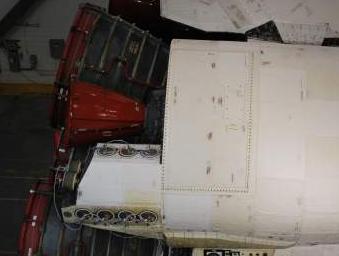 “S0004 Orbiter/ET mate: During Aft platform installations, two incidents occurred. On the 50-1 side, an ELSA (Emergency Life Saving Apparatus) became dislodged from the sidewall shelf and fell to the base heat shield area near SSME 2. No personnel injury,” the NTD noted.

“On the 50-2 side, a small filler platform fell and contacted “Purge, Vent, Duct (PVD)” ducting for SSME 3 Engine controller. No personnel injury.”

The damage to SSME 2 is deemed minor, after inspections found the only damage was a dent on the eyelid on the engine – resulting in Engineering deciding this most likely will not need to be repaired and will be Material Reviewed to fly as-is.

SSME 3 will, however, require some of its hardware replacing, with a dent in an MPS (Main Propulsion System) GN2 line and some damage to the PVD duct. This work will not delay rollout, scheduled for the end of this coming week.

“Per PVD Engineering, the PVD duct will have to be R&R’d (Removed and Replaced). There is a spare available,” added the NTD report. “MPS performed mold impressions on the damage to the GN2 purge line.”

Bar troubleshooting on a minor leak in a relief valve on the Mobile Launch Platform (MLP) the vehicle is sat on, the rest of the VAB flow is proceeding in a nominal fashion. Also, the S0044 Shuttle Countdown Simulation was successfully completed earlier in the week, while the S0008 Shuttle Interface Test began Friday and continued through the weekend.

“GUCP (Ground Umbilical Carrier Plate ) measurements are complete and data has been given to engineering. GUCP 7” QD (Quick Disconnect) installation and Hatch Functional are complete,” added the NTD report.

(Numerous articles will follow. L2 members refer to STS-134 coverage sections for internal coverage, presentations, images and and updates from engineers and managers. Images used: Jacques van Oene, Spacepatches.nl and MaxQ Entertainment – from a 900mb database of photos and video (L2) of rollover and VAB ops for STS-134).