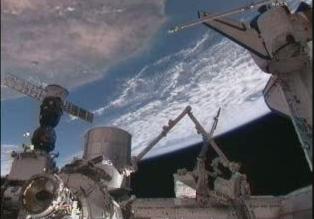 With the first spacewalk (EVA) of the mission behind them, Discovery’s crew has further completed one of the mission’s primary objectives: the installation of the PMM (Permanent Multipurpose Module) Leonardo, the final U.S. permanent pressurized module, to the International Space Station. Meanwhile, a proposed flyabout by a Russian Soyuz has been formally cancelled.

A major milestone has been reached on orbit for the International Space Station: the completion of construction on United States segment of the station.

With today’s installation of PMM Leonardo, the United States has successfully completed habitable module construction on the USOS segment of the International Space Station with a module that was originally never intended to be a permanent fixture on orbit.

Having flown more times than any other Multi-Purpose Logistics Module, Leonardo’s attachment to the ISS signals the completion of FD-6’s primary events, with EVA-2 preparations and a PAO (Public Affairs Office) event still to come.

Beginning their day just after 0550 EST, Discovery’s crew got right to work two hours after waking up with the grappling of the PMM Leonardo with the SSRMS (Space Station Remote Manipulator System).

PMM unberth from Discovery and relocation to the Nadir CBM (Common Berthing Mechanism) on Node-1 “Unity” followed. The installation was officially confirmed via second stage capture at 10:05 EST.

As initially planned per the pre-mission timeline, the Discovery and ISS crews would have worked through PMM vestibule pressurization today before ingressing Leonardo for the first time on FD7. However, because of the elimination of a Focused Inspection for Discovery’s mission timeline, ingress of Leonardo was carried out, well ahead of schedule, at 6:17pm EST.

Moreover, according to the Flight Director’s Update presentation, available for download on L2, installation of a 1553 Jumper to Node-1 “Unity” as well as Node-1 Nadir vestibule jumper installation will also be performed today since no Focused Inspection is required on Discovery’s Thermal Protection System (TPS).

Rounding out FD-6, the crew will conduct EVA-2 equipment lock preparations, reconfigure the tools needed for EVA-2, participate in a media event at 1523 EST, and conduct an EVA-2 procedures review.

Steve Bowen and Al Drew then began EVA-2 mask pre-breathe at 1948 EST, and the airlock was depressurized to 10.2 psi for Bowen and Drew’s overnight “campout” in the Quest Airlock.

Discovery’s crew will then head to bed at 2133 EST in preparation of FD-7’s EVA (spacewalk). 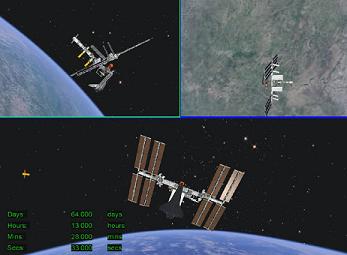 As had been expected since Monday’s notes on L2 – which pre-empted a Russian decision not to approve the proposed flyabout of the Soyuz – the Integration Mission Management Team (IMMT) formally cancelled all options related to the gathering of what would have been historic images of the ISS, Discovery and an array of visiting vehicles.

The Russian decision was based on the risk of undocking their new 700 series Soyuz from the Station – which is being classed as test vehicle – prior to the capturing of photography of the orbiting outpost, before redocking shortly after.

“The Soyuz flyaround has been cancelled; the Russians did not want to attempt it,” noted Mission Evaluation Room (MER) status (L2), prior to the IMMT formally accepting the position of the Russian Space Agency (Roscosmos).

Both parties have praised each other’s approach to the proposals, which was evaluated in a tight timeframe. Several options were outlined, each of which were assessed by the Russian partners, who continued their evaluations until the deadline of presenting their official stance at the Flight Day 6 IMMT.

As part of the standard FD-2 inspections of Discovery’s Wing Leading Edge and Nose Cap RCC (Reinforced Carbon-Carbon panels), the Damage Assessment Team has noted one Region Of Interest (ROI) on the veteran spaceship’s RCC system – a T-seal on the lower portion of her nose cap. 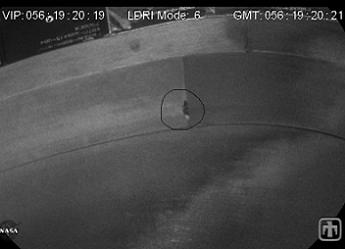 This is considered a “Type-A flaking” condition and has been seen on numerous flights.

This type of flaking is caused by excessive Type-A sealant – hence its name. The presentation notes that “Type-A adheres better to the SiC coating than to cured or pre-existing residual sealant. Repeated flight exposures can result in eventual flaking of excessive Type-A, but leaves a thin layer (as originally intended on the surface of the SiC).”

This type of flaking is generally considered acceptable for reentry as long as the following four criteria are met: “The base of flake area is a flat plateau with a continuous thin layer of Type A Sealant, there is no broken yarns along the cavity periphery, there are no broken fibers along the cavity periphery, there is no evidence of defect being caused by mechanical means.”
All four criteria are satisfied for STS-133. 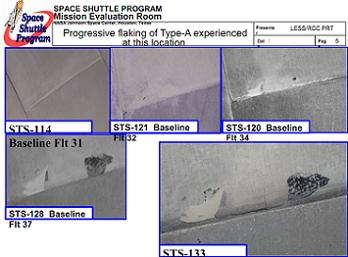 In fact, Discovery’s processing teams have been following this particular area of the RCC nose cap T-seal since the STS-114 Return to Flight mission in July 2005. Progressive flaking of this particular location on this T-seal was noted during STS-114, STS-116, STS-119, and STS-131 as confirmed by the baseline RCC T-seal imagery for STS-121, STS-120, STS-128, and STS-133.

Based on OBSS (Orbiter Boom Sensor System) IDC imagery obtain of this area on FD-2, the Mission Evaluation Room presentation notes that “Glossy Black Discoloration is common to OML areas, especially in regions with Type-A flaking” and is not indicative of exposed Carbon substrate.

Furthermore, the cause of this Glossary Black condition has previously been identified as oxidation of the Silicon Carbide content within the Type-A sealant. In turn, this causes the formation of carbon and a layer of silica glass as a direct “function of temperature and partial pressure of oxygen.

This glass actually helps protect the carbon from oxidation into gaseous CO or Carbon dioxide.

The outer layer film of the Type-A sealant then “acts as a barrier to the oxygen thereby allowing the reaction to proceed and mask the black layer until flaking occurs.”

By the time the Mission Management Team (MMT) met on Tuesday, the Damage Assessment Team (DAT) confirmed Discovery’s entire TPS has been cleared for Entry, following their Level II and Peer Reviews.

After being carried to orbit last Thursday by Discovery, Al Drew became the 200th person to perform a spacewalk during yesterday’s first of two planned spacewalks for the STS-133/ULF5 mission.

Moreover, Discovery is the only spacecraft to date to carry royalty into space. During her STS-51G mission in June 1985, she carried Sultan Salman Al Saud of Saudi Arabia as a Payload Specialist.

Lastly, Discovery was the first Space Shuttle to carry a video game into Low Earth Orbit. During STS-96 in May/June 1999, Mission Specialist Daniel T. Barry brought a copy of the game StarCraft with him to space.

(Numerous articles will follow. L2 members refer to STS-133 live coverage sections for internal coverage, presentations, images and and updates from engineers and managers – which is now into full Flight Day coverage during the mission. Images used, all via L2 documentation – bar NASA TV screenshot of PMM installed).