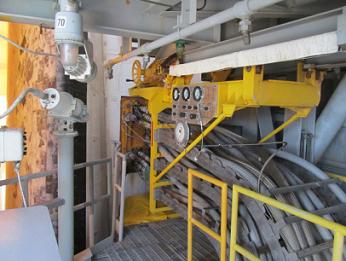 Endeavour’s stack was still being inspected for damage on Friday, following severe weather over the Kennedy Space Center (KSC) this week. So far, only “very minor” damage has been observed on the External Tank (ET-122), which has its LOX topside exposed to the elements, although Endeavour herself is still being evaluated. Meanwhile, the Terminal Countdown Demonstration Test (TCDT) has completed its two day dress rehearsal.

Endeavour continues to track an April 19 launch date for her final mission, with the STS-134 pad flow still holding a large amount of contingency in the schedule to achieve that date.

No recent Interim Problem Reports (IPRs) of note have been listed by the NASA Test Director (NTD) as the pad flow heads into the midway point in the lead up to S0007 Launch Countdown Operations.

Working through the complex series of pad flow tasks, engineers have successfully completed a series of operations, including the connections relating to the numerous mates between the vehicle and the pad via the Orbiter Mid Body Umbilical Unit (OMMUU).

While LH2 storage tank replenishment was completed this week, with one additional tanker wave offloaded, LO2 tank replenishment – consisting of two waves of tankers – is scheduled for Friday, which will also mark the conclusion of the TCDT which began on Thursday and is scheduled to conclude with a T-0 in the simulated countdown at 11am on Friday.

UPDATE: However, due to the poor weather in the region, the timeline was distorted resulting in a nominal T-0 at 2pm local on Friday.

While the crew boarded Endeavour on Friday for the business end of the countdown – as they will on April 19 – Thursday’s tasks included S1025 Emergency Egress Training, which was conducted at 0915 on Thursday morning.

Engineers were already checking into some damage on ET-122, caused by some of the local wildlife taking more than a passing interest in the big bird at the pad, when a serious storm front passed over the space center.

“ET Mechanical picked up PR ET-122-TS-0031 on the -Y Bi-Pod for ablative damage possibly from birds,” noted the NTD report. “The damage is under engineering evaluation and will most likely be an MR (Material Review) condition.” 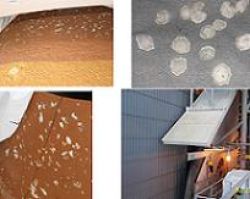 The main concern relating to the storm was hail, observed at the pad itself for around eight minutes, driven by high winds, with a lightning strike registered for good measure. It was a hail storm which damaged the top of STS-117’s ET-124 in 2007, causing the rollback of the stack for repairs in the Vehicle Assembly Building (VAB).

“Adverse Weather Event: Wednesday evening a strong storm front moved through the LC-39 area. Adverse weather securing and GSE monitoring procedures were performed per S0018 prior to the arrival of the storm,” noted the NTD report into the state of the pad and vehicle after the storm passed through.

“After the storm passed there were reports of hail and strong winds in the LC-39 area for approximately 8 minutes. A gust of 79 knots was confirmed at Pad A during the event. A lightning strike was also recorded in the proximity of Pad A. 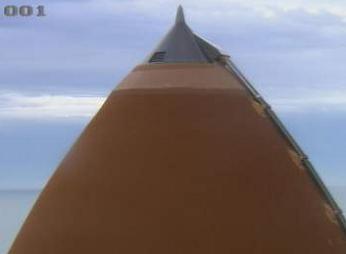 With engineering cameras scanning ET-122’s exposed areas to remotely check into any potential damage, no major issues were observed. However, checks into Endeavour’s Thermal Protection System (TPS) were ongoing at the time of publication, with rumors of damage – suffered from continuing bad weather on Thursday – noted, although no confirmation of any serious observations. (Article will be updated when additional information is forthcoming).

UPDATE: Inspections not yet complete by Friday, Engineering Review Board (ERB) met on Friday morning, but no official news has been listed at this time. More inspections are to be carried out on Saturday.

UPDATE 2: Inspections over the weekend show only minor damage on the tank. Orbiter and boosters appear to be in good shape.

“Inspections and data collection for the hail monitors at Pad A were hampered by the adverse weather and the loss of daylight Wednesday evening, although preliminary reports indicate there was only very minor damage to the ET foam,” added the NTD report.

“A formal walk down with all TPS engineering organizations will be performed today in daylight hours, weather permitting, per the S0018 procedure.”

Otherwise, the rest of the spaceport appears to have only suffered very little damage, with only blown over dumpsters and scaffolding near the Orbiter Processing Facilities (OPFs) reported.

“There was only minimal facility damage reported in the LC-39 area (scaffolding in breezeway between OPF 1 and OPF2 was toppled; an old aluminum structure in the old boxcar area was blown over at Pad A as well as a dumpster being knocked over.