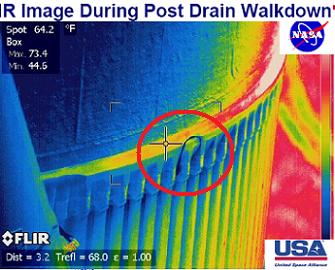 Shuttle Endeavour – the youngest orbiter in the fleet – was preparing for her final hours prior to launch, after the Mission Management Team (MMT) met to approve the tanking of ET-122.  However, several issues popped up in the count, most notably with an OMS tank issue, which was then resolved, prior to a heater issue on Auxiliary Power Unit (APU) 1 – which has resulted in a several day scrub.

With all of the recent Interim Problem Reports (IPRs) from the first two days of the S0007 Launch Countdown operations resolved, Endeavour pushed towards her key event of RSS retraction, which was scheduled for around 7:30pm local time on Thursday evening.

However, a spectacular light show from severe storm weather – containing rain, winds, lightning and hail – the latter of which appears to have stayed away from the Pad 39A region, delayed the operation, thankfully resulting in no notable damage to the stack – per initial reports.

Eventually, the RSS retraction was completed by 12:32am local time, revealing Endeavour for what may be her final starring role on a launch pad.

The first major task for Endeavour’s launch day was the meeting of the MMT, which reviewed the overnight storm events, plus the upcoming weather for morning, prior to making a decision on whether to proceed with tanking the Shuttle’s ET-122.

A go was given by the MMT, allowing engineers to start the pumps to chilldown the transfer lines between the storage tanks and Endeavour’s Main Propulsion System (MPS), which is the path taken by the LOX and LH2. Slow fill and fast fill soon followed, prior to a smooth completion of tanking operations.

As with all recent tanking, several areas of interest were closely monitored, such as the low level and Engine Cut Off (ECO) sensors, which have performed as advertised since a successful resolution to what was a problem in part of the LH2 Feedthrough connector system.

As the three hour tanking process continued, sensors were sniffing around the top of the tank for any indicators of a leak from the Ground Umbilical Carrier Plate (GUCP), which has been problematic during a number of countdowns, such as STS-119, STS-127 and the previous mission, STS-133.

With tanking complete, cameras around the pad – including infra-red systems – will keep a close eye on the flange area between the Intertank and LO2 tank, ensuring no observations of cracks are found in the Thermal Protection System (TPS) foam, which would be an indication of a cracked stringer.

This is also unlikely to occur, following the STS-133 event, with mitigation in place via the installation of radius blocks around the circumference of the flange, which worked well on Discovery’s ET-137.

Atlantis’ ET-138 tank also sports the stringer modifications, given its close relation to Discovery’s tank, although ET-122’s modifications are only installed as a contingency, given this tank is much older than most of the recent tanks to launch.

ET-122 wasn’t fabricated during the period where suspect “mottled” materials were used on the production of the stringers.

Numerous key events will follow after tanking, including the checks on the tank by the Final Inspection Team (FIT), who will check for ice build up on the tank, prior to the crew making their way to the pad to ingress Endeavour.

With the actual tanking process starting on time and suffering from no issues as fast fill continued, the NASA Test Director (NTD) noted one of the latest Interim Problem Reports (IPRs) to be charged against Endeavour on Friday morning. The issue related to the orbiter’s power-generating Fuel Cells.

“Performance will be monitored during and after Fuel Cell start to see that data falls into expected values and if that occurs,  the standard MR rationale will apply. Constraint: 16-1154 resume count at T-9.” 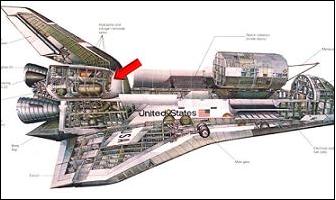 Another issue (IPR-53) was then listed during early tanking – as much as it wasn’t related to the loading of prop into the tank. This issue is being classed as “Right OMS fuel tank LCC (Launch Commit Criteria) OMS05 violation pressure limit.”

Meetings are taking place on a course of action, with notes this condition has not been seen before at this stage of the countdown. There is potential a LCC waiver can be added to remove the constraint.

However, a forward plan was approved to interconnect the crossfeed lines between the two OMS tanks to try and equalize the pressure, which brought the pressure back within LCC limits.

The other main problem related to an Auxiliary Power Unit (APU) heater unit (IPR-54 – changed from the initial IPR-55), which was seen to be  trending low and required further investigation. This issue has caused the SCRUB after it was deemed to be a hard failure. 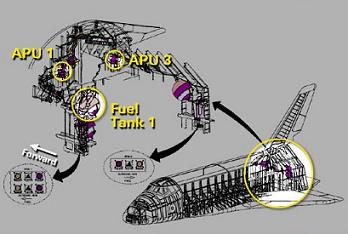 With acccess acquired by techs at the pad, it was thought the flicking of a number of related switches would allow for the problem to be cleared.

“Auxilary Power Unit switched to the A heater string via ground command and the temperature is now trending up,” added L2 information. “Still need to verify heater B function via cockpit switch.”

However, the call came back to the Launch Control Center that the problem was engineering-related, on an LCA (Load Control Assembly) resulting in the decision to scrub for between three to five days, as a forward plan is built on repairing the hardware.

ET-122 is currently being drained, per scrub requirements. 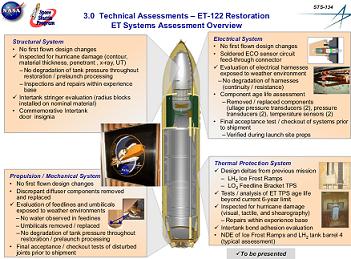 As noted, ET-122 is an older tank, refurbished after the damage it sustained during Hurricane Katrina, modified with the numerous and successfully proven Return To Flight (RTF) modifications, and returned to the flight manifest for a star role with one of the final flights of the Space Shuttle.

Originally set to fly on the final mission with Atlantis on STS-135, managers decided – due to the lack of a Shuttle Launch On Need (LON) for the final flight – to reserve the newer ET-138 to fly last, promoting ET-122 to fly with Endeavour.

As as result of the tank’s eventful history, modifications and improvements, the Flight Readiness Review (FRR) for ET-122 was one of the largest reviews for a tank since the fleet returned to service since the tragic loss of Columbia during STS-107’s return. 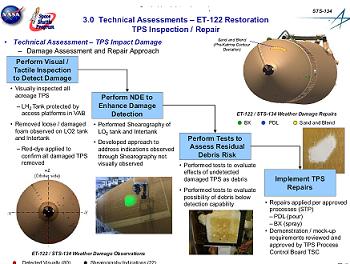 External Tank 122 was delivered as completed tank in November 2002 and stored at the Michoud Assembly Facility (MAF) and was actually undergoing the RTF modifications when the tank was exposed to weather-related environments during Hurricane Katrina while inside the VAB at the New Orleans Facility.

The areas of repair are obvious to see, with numerous lighter patches around the tank, none of which will prove to be a debris hazard during ascent.

(All images via L2, with addition to Larry Sullivan of MaxQ Entertainment/NASASpaceflight.com. Extensive coverage is being provided on the news site, forum and L2 special sections – the latter of which is the world’s best front row seat to Shuttle launches and missions, breaking every major event over the last 10 missions before any other site, including NASA sites/TV).