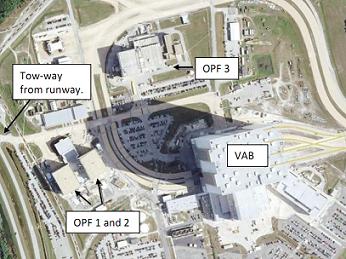 With Discovery safely back on the ground after becoming the first orbiter to successfully complete all of the missions assigned to her, NASA is beginning the process of shutting down processing operations in Florida. Specifically, NASA and the Space Shuttle Program are preparing to release Orbiter Processing Facility bay 3 from service earlier than anticipated, thereby eliminating one of three OPFs capable of handling orbiter T&R (Transition and Retirement) processing.

While information on where the three iconic space vehicles will be displayed for posterity following the completion of the SSP will not be announced until April 12 (the 30th anniversary of first Shuttle mission, and the 50th anniversary of the first manned spaceflight), NASA is pressing forward with T&R processing in Discovery in Orbiter Processing Facility bay 2 (OPF-2) – a significant change of scenery for Discovery who has called OPF-3 home since 2005.

In fact, since Shuttle flight operations resumed in 2005, each orbiter has enjoyed her own OPF: Atlantis in OPF-1, Endeavour in OPF-2, and Discovery in OPF-3 – a rarity in the life of the program which, for a majority of its existence, operated with more orbiter than OPF.

However, put simply, all three OPFs are no longer necessary to support Shuttle operations, and with other potential customers expressing interest in using Shuttle hardware for variant vehicles (namely – though not confirmed – the US Air Force’s X-37B), NASA is moving toward an early release of OPF-3 – with handling of T&R processing of the Discovery, Atlantis, and Endeavour in only two OPFs.

As noted in the expansive Discussion of Early Release of OPF Bay 3 document (dated March 24, 2011), available for download on L2, “Request Space Shuttle Program concurrence for early release of OPF Bay 3 by June 1, 2011 (vs current planned date of Feb 2012).”

In all, OPF-3 is located just to the northeast of conjoined OPFs 1 & 2 and shares a facility space with the SSMEPF, PCC, Communications & Tracking Station #2 (C&T 2), and the communications hub for part of the Launch Complex 39 area. 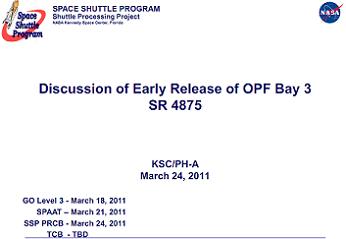 The presentation for the early release of OPF-3 partially focuses on the adjoined work stations and their vital nature to the completion of the program.

Specifically, C&T 2 “Supports integrated pad operations, launch activities, OPF Bay 3 processing, and [serves as a] backup for C&T 1 during post-mission roll in ops.” Therefore, C&T 2 must be maintained through the end of the Shuttle Program.

Likewise, the SSMEPF is where all of the Space Shuttle Main Engines are a) processed for flight and b) taken for post-flight teardowns, inspections, and evaluations. Following the completion of STS-135 and the post-mission processing of Atlantis’s SSMEs, the SSMEPF will be used to process all Replica Shuttle Main Engines (RSMEs) for T&R and display processing of the three orbiters.

To this end, the SSMEPF will need to be maintained until at least May 1, 2012 under the current RSME processing schedule for orbiter Endeavour (the orbiter which will take the longest to transition from flight status to display configuration).

Moreover, the PCC is, as noted the OPF-3 early release assessment presentation, the site for software development & validation and training simulations.

More importantly, though, the PCC is the fallback location for Firing Room personnel on launch day in the event of a Launch Control Center (LCC) evacuation. As such, the PCC cannot be released from SSP duties until (at least) the completion of post-launch securing operations for STS-135. As such, the target release date for the PCC is December 2011 – well beyond the currently planned launch for STS-135 on June 28, 2011.

However, these facilities and systems can remain operational through their needed lifecycles for the Shuttle Program even with the early release and turnover of OPF-3.

While the early release of OPF-3 is feasible from a facilities standpoint, its possible impacts on T&R processing of Discovery, Atlantis, and Endeavour could have proved more costly and time-consuming than simply keeping the OPF in operation.

To evaluate potential T&R timeline and cost impacts from the potential early release of OPF-3, the investigation team assembled two integrated T&R flow timelines: one with all three OPFs in use, and a second utilizing only OPFs 1 & 2.

Under timeline #1 (all three OPFs in service), Discovery would perform her DMP (Down Mission Processing) in OPF-2 before being moved to OPF-3 for all T&R work. T&R work would proceed in OPF-3 from late-April 2011 through January 2012, with Discovery’s FRCS (Forward Reaction Control System) and OMS (Orbital Maneuvering System) pods returned from White Sands, New Mexico for display installation on Discovery in late-October 2011. 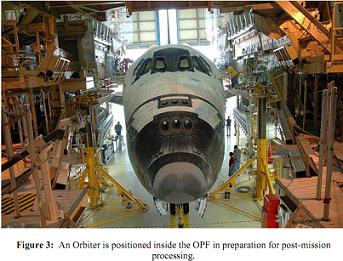 In all, Discovery would be ready for ferry to her display site in early February 2012, with OPF-3 safing, T&R, and release occurring between February and October 30, 2012.

Atlantis would then be the next vehicle ready to ferry to her display site, despite the fact that she will be the last orbiter to fly and will fly at least two months after sister Endeavour.

Here, Atlantis would undergo DMP and T&R operations in OPF-1 from mid -July 2011 through late-May 2012. The FRCS and OMS pods originally from Endeavour’s STS-134 mission would be returned from White Sands for display site installation onto Atlantis in late-Feb. 2012. She would then be ready for ferry to her display site in mid-June 2012.

Conversely, Endeavour would undergo her STS-134 DMP and prolonged T&R work in OPF-2 from May 2011 through late-September 2012. The FRCS and OMS pods originally from Atlantis’s STS-135 mission would be returned from White Sands in late-June 2012 for display site installation onto Endeavour.

Endeavour would then be ready for transport to her display location in mid-October 2012.

Full-scale integrated safing and T&R work on OPFs 1 & 2 would then take place through May 2013.

Under timeline #2 (early release of OPF-3 on June 1, 2011), Discovery would remain in OPF-2 (where she currently resides) until late-April. At this point, she would be moved to VAB (Vehicle Assembly Building) HB (High Bay) 4 for storage. 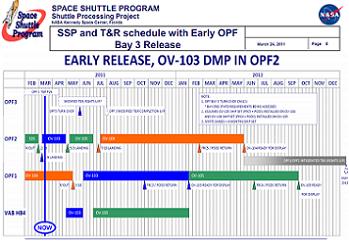 Endeavour, landing in early May from STS-134, would then be towed into OPF-2 for initial DMP and post-flight safing.

Atlantis would then be rolled to the VAB for mating with her ET/SRB (External Tank/Solid Rocket Booster) stack in late-May, thereby vacating OPF-1. Once this is completed, Discovery would be rolled into OPF-1 in early June 2011 for complete T&R work.

Following landing in early/mid-July 2011, Atlantis would be towed into OPF-2 for DMP and complete T&R work from July 2011 through late-May 2012 – the same timeframe as timeline #1. 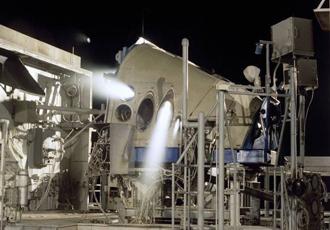 In OPF-1 Discovery’s FRCS and OMS pods would be returned from White Sands for display site installation in late-October 2011.

T&R teams at the Kennedy Space Center would then complete all T&R work on Discovery in late-January 2012, with Discovery ready for ferry to her display site in mid-February 2012 – the same timeframe under timeline #1.

A few days after the rollout and ferry of Discovery out of Kennedy, Endeavour would be removed from the VAB and moved into OPF-1 where her T&R processing would begin.

Meanwhile, Endeavour’s FRCS and OMS pods would be returned to the Kennedy Space Center for installation onto Atlantis in mid-/late-February 2012. Atlantis would complete all T&R work in late-May 2012 and be ferried to her display site in early-/mid-June 2012 (the same timeframe as timeline #1).

At this time, limited T&R work would begin on OPF-2.

Meanwhile, Endeavour would be continuing with her T&R processing, with Atlantis’s FRCS and OMS pods returned to Kennedy for installation to her (Endeavour) in mid-June 2012. Endeavour herself would wrap up T&R processing by September 30, 2012 and be transported to her display building in early-/mid-October 2012.

At this point, full-scale T&R and release work would begin on OPFs 1 & 2, with complete OPF release in May 2013.

Of course, both timelines #1 and #2 assume the display museums for Discovery, Atlantis, and Endeavour are fully ready to receive their orbiter upon completion of orbiter-specific T&R work. 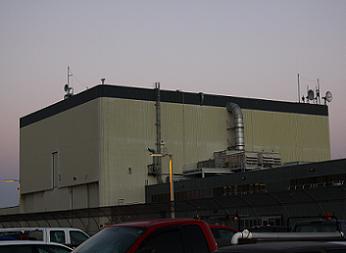 Under Timeline #2, all DMP and safing would occur in OPF-2 with all T&R work occurring in OPFs 1 & 2.

Therefore, with timeline milestones for the three vehicles identical in both timelines, the release of OPF-3 in June 2011 does not hinder the T&R timelines.

However, on-going assessment of FRCS and Pod work at White Sands, including potential get-wells in those processing schedules, could drive OPF processing into the critical path for all T&R work. But these “time deltas” would not be significant and “would not result in improvement of overall T&R timelines.”

While KSC ground transition teams might require “1 month past June 2011 to complete facility T&R,” this work could potentially be accomplished in parallel with “new customer work.”

Moreover, there would be no budget increase for T&R work as a result of the early release of OPF-3, with “Potential cost savings and/or cost avoidance under review due to potential reduction in facility safing requirements planned under current Ground Ops T&R plan.”

But the cost assessment and T&R timeline impacts were not the only factors that came under consideration for OPF-3’s release; NASA also studied the impacts to T&R and mission processing should either Endeavour and/or Atlantis suffer a de-stacking and rollback to the OPF prior to their launches on STS-134 and STS-135, respectively.

“Rollback/demates, RTLS (Return to Launch Site) aborts, and early landings scenarios [are] accommodated with two OPF bays and VAB HB4” for all scenarios involved with having more Shuttle orbiters than available OPFs due in large part to previous Ground Ops experience base during the 1990s and early 2000s when there were 4 vehicles and 3 OPFs.

To this end, all Ground Operations Risk Assessments (GORA) have been completed and no increase in risk was identified that “could be mitigated.” 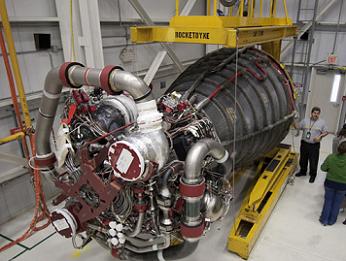 Provisions are in place to maintain SSMEPF and C&T 2 through the flyout of the Shuttle manifest. The SSMEPF will be maintained through T&R RSME installations, with C&T 2 released post-STS-135 OPF roll-in ops.

Furthermore, as noted by the OPF-3 early release presentation, “Increased risk from losing OPF Bay 3 environmental controlled storage areas mitigated with usage of other storage locations. Increase risk identified for potential interruption of the C&T lab and SSMEPF mitigated by limiting modifications done during this overlap period between turnover and last flight.”

Likewise, VAB HB4 will be preserved through at least the first orbiter flyout to display location with minimal effort to prepare for orbiter storage.  Forward and Aft access for Discovery and Endeavour will be available during VAB storage (if needed), as will vehicle purge, jacking and leveling, and minimal power-up.

Hydraulic ops and major hazardous operations will not be allowed during VAB storage for OV-103 and OV-105.

Therefore, the investigative team identified no shuttle manifest flyout issues with the early release of OPF-3.

As such, concurrence from the SSP has been solicited for the early release of OPF-3 on June 1, 2011 pending approval of the OPF-3 SMRT document.

The release of the SSMEPF (target date: May 1, 2012) has also been solicited, with forward work to determine storage requirements & relocation funding for existing SSME stock and future GSE (Ground Support Equipment) & associated schedules with the Marshall Space Flight Center in Huntsville, Alabama.

Release of the PCC in December 2011 was also recommended to the SSP.

(Further articles will follow, as we follow Discovery all the way to the exhibition. L2 members refer to L2’s ongoing coverage sections for internal coverage, presentations, images and and updates from engineers and managers. Images used: Lead: Brian Papke/MaxQ Entertainment/NASASpaceflight.com. All other images via L2, bar SSME photo from NASA.gov).