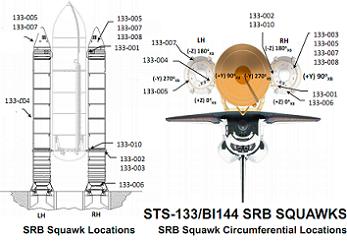 Following the highly successful launch of the STS-133 mission, NASA and its contractors have reviewed the vehicle’s performance for any In-Flight Anomalies, or IFAs, on the systems of the Solid Rocket Boosters (SRBs) and Reusable Solid Rocket Motors (RSRMs). In all, the standard investigations have revealed a very clean performance in both categories, with only one IFA charged to the SRBs and zero IFAs charged to the RSRMs.

In all, post-flight inspections of the twin SRBs used to propel Shuttle orbiter Discovery toward space on February 24 of this year turned in a smashingly clean performance across the board. 16 IFA presentations are available to download on L2.

Only seven squawks were noted on the STS-133 SRB IFA review – one of which gained classification as an In-Flight Anomaly.

For this one IFA, the presentation notes, “Squawk 133-001: Loss of Video for ET Observation and Main Parachute Deployment Cameras.”

The video recording began approximately 6secs before the first parachute disreef and ended abruptly 18secs after slash down into the Atlantic. 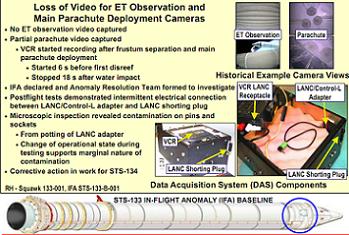 The IFA classification was declared by the SRB post-flight inspection team to document the failed video capture; an Anomaly Resolution Team (ART) was subsequently formed to further investigate the failure.

To this end, initial testing revealed an intermittent “electrical connection between [the] LANC/Control-L adapter and LANC shorting plug” as well as “contamination on pins and sockets.”

The ART determined that the contamination’s cause was two-fold: the adapter potting material leaked around “hollow rolled pins” and particles were likely loosened during previous flights.

For STS-134/Endeavour, this issue will be corrected via the fabrication of new LANC adapters and shortening plugs. The same procedure will also be used for STS-135/Atlantis.  The LANC adapter hollow pins will also be replaced with solid pins, and pre-potting sealing techniques will be used to prevent leakage. 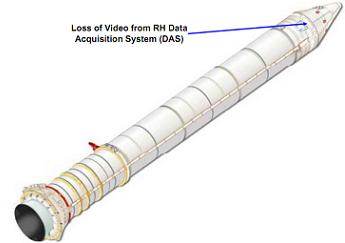 Thus, the SRB system is cleared for flight on STS-134 and subsequent flight due to the replacement of the discrepant hardware and the fact that video recording of the ET and of parachute deployment is only a Crit III mandate.

Aside from this sole IFA, the six remaining items noted in the SRB IFA presentation for STS-133 included an impact indent on the forward portion of the Froth-Pak foam on the External Tank Attachment (ETA) ring.

According to the IFA presentation, “Indent on forward surface and located at 330-degrees.” The indent measured 0.25 inches in diameter and 0.5 inches in depth – an indication of “potential secondary debris.”

The expected (or calculated) debris generation and impact tolerance was within specification, and the most likely cause of the debris was ice.

No sampling of the impact area was requested; the impact had no effect on SRB hardware or booster performance.

Likewise, a suspect area of ETA Ring Froth-Pak “foam pop-off” had no impact on booster hardware performance. The three areas of foam pop-off (all on the RH SRB) occurred at 45-degrees, 290-degrees, and 330-degrees – with the 45-degrees pop-off carrying the heaviest weight at 0.0013 lbm.

A review of RH SRB ETA foam processing found that all pop-off areas had received seal coat application. Furthermore, these types of liberations have been seen on numerous previous flights; the liberation mechanism is understood to be void delta-P loading.

For STS-134/Endeavour, the application process of the ETA foam has been changed and “clarified trimming requirements and eliminated seal coat” updates have been placed into effect. 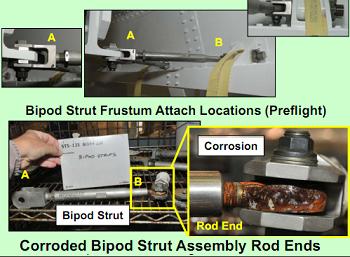 Despite the corrosion, the structural integrity of the Rods was found to be unaffected since the corrosion was only surface-level. Since the Struts only provide lateral support, they are not a concern for ascent. Nonetheless, the investigation is still ongoing and the issue is classed as “open” for STS-134.

The fourth squawk was opened to document an inconsistent installation of the Frustum CDFA (Confined Detonating Fuse Assembly). “Observed CDFA bundle crossing structure member with and without aluminum tape,” notes the IFA presentation.

Initial investigations showed that this inconsistency could have been a result of a misinterpretation of a general note v. flag note with tape callout in the frustum CDFA installation rules. 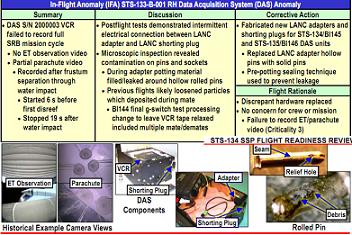 However, there is no technical concern over these inconsistencies as there are multiple layers of protection within the CDFA design. However, as noted by last week’s SSP FRR (Space Shuttle Program Flight Readiness Review) SRB presentation (available for download on L2), this is still considered an “open” item by the SRB community and NASA.

The presentation notes that the foam blocks were likely “kitted incorrectly at refurbishment and subsequently installed incorrectly.”

Lastly, corroded coupling nuts on the Aft Tunnel Cable Connectors were discovered post-flight. The corrosion was found on both ends of the cable and was not previously documented as a Problem Report.

Squawks of this nature have been taken on “multiple previous flights.” The corrosion had no effect on the cable’s functionality, although investigations into the connector date of manufacture and condition are underway. This issue is still classed as “open” as of the SSP FRR for STS-134.

Furthermore, of particular note for STS-134/Endeavour is the fact that this flight will represent a “decrease in risk due to alternate Phase II Fuel Pump implementation on 4 of 4 locations.” 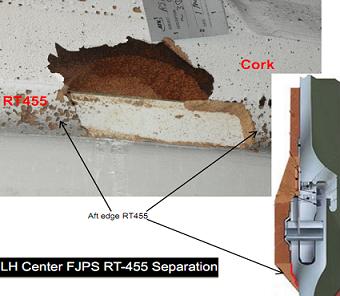 The location and appearance of the remaining FJPS material indicates that the damage was caused during SRB descent.

“On the exposed RT445 to case bondline, separation was noted, extending circumferentially along the FJPS in both directions.” The separation ended approximately 6 inches from the impact site.

“Thermo-structural analysis shows that an extreme bounding condition would maintain positive margins through ascent and separation,” notes the presentation. No flight concern was identified for this issue. 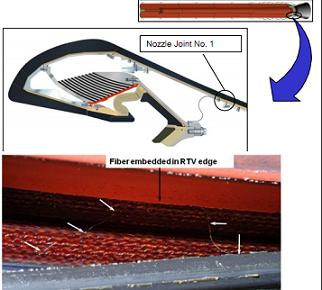 The material in question was partially encapsulated in RTV backfill, which means it was present in the assembled joint and not introduced to the area upon SRB disassembly.

The material was later determined to be a hair, 1-millimeter in diameter.

Furthermore, no issues were observed with the primary or secondary O-rings or the sealing systems. All pre-flight leaks checks were within family. The mostly likely introduction of the hair was during KSC mating operations which do not occur in a clean-room environment.

The errant hair does not affect flight safety rationale for STS-134 and subsequent flight. 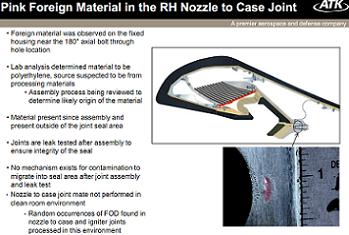 The penultimate squawk for STS-133’s RSRMs was for a pink foreign material found in the RH booster’s Nozzle-to-Case joint. “Foreign material was observed on the fixed housing near the 180-degree axial bolt through hole location.”

Analysis determined the material to be polyethylene, with the most-likely source of introduction being processing materials.

The material was clearly present since assembly and was located outside of the joint seal area. Each joint is leak checked after assembly to “ensure integrity of the seal. No mechanism exists for contamination to migrate into seal area after joint assembly and leak test.” 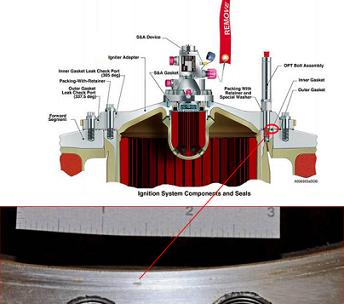 Analysis showed that the discoloration was not corrosion or caused by exposure to hot gas, which eliminates pre-flight and in-flight conditions.

“Likely cause is post-fire heat soak causing deposition of gasket rubber on steel or heat effects on the grease used during assembly.”

This type of discoloration has been noted on “several previous igniter chambers.”