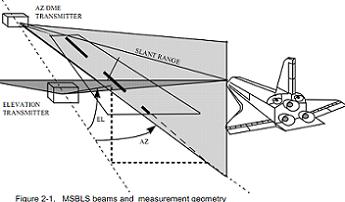 Endeavour is all set for her final S0007 launch countdown events, opening with the retraction of the Rotating Service Structure (RSS), delayed to 11:45pm local time on Thursday. Only a handful of minor Interim Problem Reports (IPRs) have been charged against Endeavour, all of which have been resolved heading into what may be her final day on a launch pad.

The final key status meeting – the L-2 Mission Management Team (MMT) on Wednesday – gave their expected “go” to proceed toward launch as scheduled on Friday at 1547 EDT, although the vehicle’s health will continue to be briefed to management throughout the count, with the launch day MMT – early on Friday – tasked with providing a green light for tanking of ET-122.

S0007 operations have been relatively quiet from a problematic standpoint, with the first listed issue relating to the Microwave Scan Beam Landing System (MSBLS).

This system will provide Endeavour and her crew with highly accurate three-dimensional position information, in order to compute steering commands to maintain the spacecraft on the nominal flight trajectory during the landing phase.

“IPR-0044: During data review, engineering noticed an off-nominal bit change occurred during the MSBLS 3 Self Test,” noted the NASA Test Director (NTD) flow report (L2). Troubleshooting re-performed the self test 10 times with data review data each time, but the anomaly could not be recreated. The data will be presented (to engineering meeting) determine what, if-any, further action is necessary.”

The MSBLS 3 hardware is located inside Avionic Bay 2 on Endeavour, and needs to be in an acceptable condition to avoid being a constraint to Final NAVAIDS activation, part of the S0007 set of tasks. Thankfully, the engineering meeting passed the hardware to fly as-is.

“The team met and determined there is no need to remove and replace the MSBLS 3 decoder or RF (Radio Frequency) unit. The system will fly as is. This IPR has been upgraded to a PR (Problem Report) for deferral.”

A second IPR (0045) was also charged against the MSBLS system, although this was soon closed as an incorrect data entry by one of the engineers during the testing, allowing it to be classed only as a “human error”. 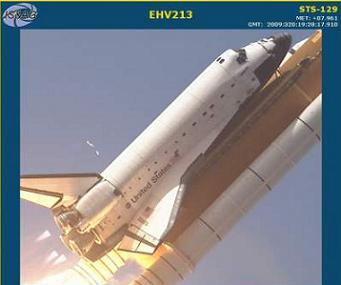 In the meantime, engineers checked the Forward Reaction Control System (FRCS) Tyvek cover installation, completing engineering inspections and passing the numerous covers which protect the orbiter’s small thrusters from rain and debris for flight. These covers will fall off the orbiter during the first few seconds of flight.

Tasks relating to the Power Reactant Storage and Distributation (PRSD) load and offload were also completed on the LH2 and LO2 side, although this operation was slightly delayed.

However, the task was completed without impact on the S0007 flow, thanks to the smooth operation, which suffered from no Ground Support Equipment (GSE) IPRs, something that can happen when commodities are transferred two and from the orbiter via a series of lines and Quick Disconnects (QDs).

Only a minor issue – relating to the gas detector monitoring on the OMBUU carrier plate LH2 tanks 2 and 3 – was listed by the NTD IPR report during this period of operations. A broken fuse was found to be the culprit, resulting in its quick replacement, prior to retests showing the system was back to nominal operations. 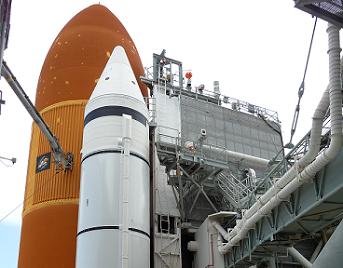 Two additional issues were noted elsewhere on the stack, the first found during the range safety signal confidence check when the Left Hand Solid Rocket Booster (SRB) Automatic Gain Control (ACG) systems (A and B) were attenuated.

This issue was resolved by technicians simply tightening a connector backshell, showing how even a solution used by everyday people on their own household appliances can sometimes solve a problem on the world’s most technically complex machine.

“IPR 0047: While performing the range safety signal confidence check, noted LH SRB AGC systems A and B were attenuated. Both systems were reading 1.5v, s/b 3.5v. Techs located a loose harness/connector in compartment 41A (6018W3P1),” explained the NTD report.

“When the harness was moved, the AGC signal fluctuated. The technicians tightened the connector backshell and the AGC readings are now nominal on both systems. Engineering is content with the system at this time and will upgrade the IPR to an MLP (Mobile Launch Platform) PR for either deferral or closure.” 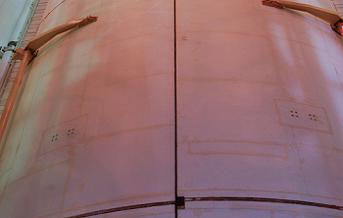 The other issue was found during the Payload Bay Door (PLBD) strongback carrier panel fastener installation, when one of the fasteners wouldn’t install properly.

“During 1 of 16 fasteners could not be installed due to a discrepant nutplate. Disposition is in work to bond the FRSI plug in place and plug the hole with RTV, thus flying without the fastener. This same method has been used previously on other flights. Constraint to RSS rotation.”

Tasks for Endeavour’s final day on the pad – providing she launches on Friday – also included the final SSME (Space Shuttle Main Engine) preps for flight, Comm activation and Flight crew systems time critical stow. The RSS was scheduled to be moved into the park position at aound1900 Thursday evening. However, this was delayed to at least 11:45pm due to a severe storm in the region.

The next big task will be  Tanking, which is scheduled to begin Friday morning at 0622 EDT. 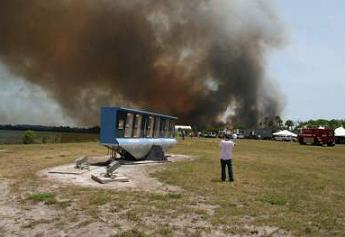 Wednesday was also an interesting day outside of the pad, as KSC cameras picked up a large brush fire near the turn basin. Although reasonably dramatic in appearance, firefighers soon put out the blaze, and continue to water down the area through Thursday.

“A brush fire was reported southeast of the turn basin yesterday (approximately 3 miles from the launch pad),” listed the NTD. “Fish and Wildlife reported that the brush fire is now fully contained, but still smoldering and smoking. Helicopter water bucket operations will continue. There were no reports of personnel injuries, flight hardware, or facility impacts associated with the brush fire.”

Meanwhile, the weather for launch continues to be favorable, as much as the chances for a weather violation at launch time have increased slightly to 30 percent.

“Winds will shift to the north-northeast, and Shuttle Landing Facility (SLF) crosswinds continue to be a concern. Our primary concerns for launch are a low-cloud ceiling and a SLF crosswind violation,” added a weather report added to the NTD overview.

“The following day, clouds will clear out, but the concern for a SLF crosswind violation increases as the winds shift more easterly. By Sunday, the winds become more favorable from the east-southeast, and there is a slight concern for clouds returning from the southeast with the onshore flow.”

(All images via L2, with addition to Larry Sullivan of MaxQ Entertainment/NASASpaceflight.com. The Launch Day article will be published ahead of tanking on Friday, with extensive coverage provided on the news site, forum and L2 special sections – the latter of which is the world’s best front row seat to Shuttle launches and missions, breaking every major event over the last 10 missions before any other site, including NASA sites/TV).