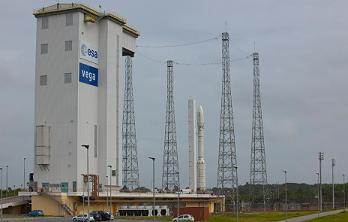 Arianespace have launched two telecommunications satellites via their Ariane 5 ECA launch vehicle. The two passengers – ST-2 and GSAT-8 – are being lofted into their respective transfer orbits from the European Spaceport in Kourou, French Guiana – with lift-off on time at the opening of the launch window at 20:38 GMT.

The Ariane 5 ECA (Cryogenic Evolution type A) – the most powerful version in the Ariane 5 range – is was used for this flight.

Ariane 5 flights will carry the “VA” designation, followed by the flight number.  The “V” is for “vol,” the French word for “flight,” while the “A” represents the use of an Ariane launch vehicle.  As a result, the mission with ST-2 and GSAT-8 will carry the “VA202” reference, for the 202nd launch of an Ariane since this family of vehicles began operations in 1979.

With the introduction of Soyuz at the Spaceport in 2011, Arianespace missions from South America with the medium-lift workhorse launcher will be designated “VS,” while flights with the lightweight Vega vehicle are to be referenced as “VV.”

The new Vega small launcher took its the next step towards its maiden flight later this year with completion of mechanical testing of a full-scale mock-up at the Spaceport in April.

ST-2 will be deployed first during the 31-minute flight sequence of Ariane 5.  Built by Japan’s Mitsubishi Electric Company, the satellite will be operated by the ST-2 Satellite Ventures joint company of Singapore Telecommunications Ltd (SingTel) and Taiwan’s Chunghwa Telecom Company Ltd.

With an estimated liftoff mass of 5,090 kg., ST-2 will provide Ku- and C-band relay services for the delivery of IP-based fixed and mobile, voice and data transmission satellite services to businesses – especially direct broadcast TV operators and maritime companies in Asia and the Middle East.

Mitsubishi Electric has been a leading manufacturer contributing to space research and development in Japan mainly for Japan Aerospace eXploration Agency (JAXA), as well as participating in the development of more than 440 international satellites as major subcontractor.

The DS2000 bus was evolved from the Engineering Test Satellite-8 (ETS-8) developed for NASDA (the National Space Development Agency of Japan), and also was used for the SKY Perfect JSAT Corporation’s Superbird-C2 telecom spacecraft, which was orbited by Arianespace in August 2008 on an Ariane 5.

The other passenger in Ariane 5’s dual-payload “stack” is GSAT-8, which was built by the Indian Space Research Organisation (ISRO).  This spacecraft weighs approximately 3,100 kg. for liftoff, and carries 24 transponders to augment India’s Ku-band relay capabilities – primarily for direct-to-home TV broadcast services – with a coverage zone including the entire Indian subcontinent.

GSAT-8 – which also is known by the INSAT-4G designation – designed for a mission life of 12 years. Operating with a payload power of 5,300 Watts, the satellite will be located at an orbital position of 55 deg. East longitude following its deployment by Ariane 5.

The GSAT-8 platform will be launched along with ST-2, a spacecraft for the ST-2 Satellite Ventures Pte Ltd. joint venture of Singapore Telecommunications Ltd (SingTel) and Chunghwa Telecom Company Ltd.

Another satellite operated by India was INSAT-2DT, which originally was orbited by Ariane in 1992 as Arabsat-1C and acquired by ISRO in November 1997.

Arianespace are targeting six Ariane 5 missions in 2011, along with the first two launches of the medium-lift Soyuz and the lightweight Vega’s maiden flight – all from the Spaceport in French Guiana; as well as three Soyuz missions from Baikonur Cosmodrome in Kazakhstan.