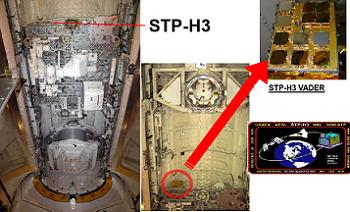 Endeavour remains on track for launch on Monday, as she hit the start of her S0007 Launch Countdown operation on time at 7am Friday morning. No issues are being worked on the vehicle, although a meeting on Thursday confirmed a decision not to reopen the Payload Bay in order to help the STP-H3 VADER experiment, which is struggling to cope with the extended stay at the launch pad.

The highly complex set of procedures for S0007 operations has numerous built-in reliefs in the event of troubleshooting on the vehicle. However, Endeavour passed the S0007 pre-test briefing on Thursday with flying colors, leading to an on time Call To Stations (CTS) at 06:30 EDT on Friday, with the clocks counting down from T-43 hours (L-73 hours, 56 minutes) 30 minutes later.

Final work conducted at the pad ahead of the countdown related to final closeouts on the vehicle and their associated confidence checks, along with some late work at Pad 39A’s fuel farm.

A check on Endeavour’s launch window propellent load was also carried out on Thursday night, allowing for a calculation of the orbiter’s Ascent Performance Margin (APM).

“Processed Change Request to eliminate the O2 offload of 65 pounds. Think this provides O2 nearly through the window. Might be able to stand down for only a single commodity top-off for H2. Gives more flexibility, because do not need to bleed off O2,” noted Flight Operations & Integration (L2). “Have about 1435 pounds APM absolute, so are in good shape.”

Work was also carried out on one of Endeavour’s experiments, which is riding uphill in her Payload Bay, due to it suffering from humidity issues caused by STS-134’s extended stay at the launch pad.

“Thursday night the pad was cleared to support air-to-GN2 changeover providing a Nitrogen purge for the STP-H3 VADER experiment payload which is vulnerable to humidity,” added the NTD. “GN2-to-air changeover is currently in progress and the pad is opened for controlled work at approximately 0800 EDT.” 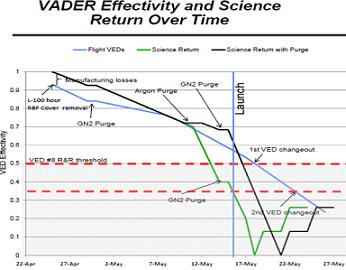 However, its inability to deal with the launch delay became a topic for Thursday’s Daily Program Requirements Control Board (PRCB), focusing on a decision not to allow access to provide mitigation work on the experiment inside the Payload Bay, resulting in an estimation that there will be a return of just 35 percent’s worth of science from the passenger.

The initial request related to a call for technicians to access the payload and reinstall covers over the experiment, after a cover was originally removed on April 25, in preparation for the April 29 launch attempt. Such a process, which would have included an Argon purge top off – would have taken 16 hours, but also included risks associated with the reopening of the Payload Bay Doors (PLBDs).

The VADER customer (The US Air Force Research Laboratory’s Space Vehicles Directorate) are cited as “disagreeing” with the decision, made on May 9 at both the Space Shuttle Program (SSP) and International Space Station (ISS) management level.

However, the associated PRCB presentation (L2) notes that the reinstallation of covers would only protect VADER from further launch delays, would still result in reduced science, and holds risks of contaminating Endeavour’s payloads if workers are sent back into the cargo bay. 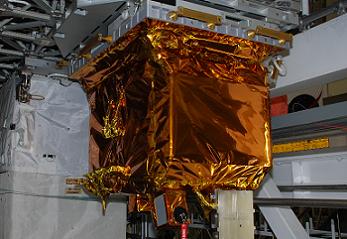 “This additional work just before S0007 limits recovery time to evaluate and repair issues are in itself a risk to the current launch date. Damage or issues discovered at a late date typically require design center evaluation before proceeding with fix.”

The PRCB presentation also notes that future payloads should be designed to cope with launch delays and humidity/moisture issues, thus making them “less risky” to suffer after a scrub or delay.

Friday work before and after the start of the launch countdown included Endeavour being awakened from her slumber, with vehicle power up at 05:26am EDT. Opening S0007 tasks for Friday include include the checkouts of her Data Processing System, PRSD (Power Reactant Storage and Distributation) load preps, External Tank (ET-122) load preps, and Flight Crew T-37 hour stow tasks.

Managers will meet again on Saturday for the L-2 (days) Mission Management Team (MMT), where they will receive a final overview of the work conducted on troubleshooting Endeavour’s Aft Load Controller Assembly (ALCA-2), which was central to a failure of the B Heater String on Auxiliary Power Unit 1 (APU-1), causing the April 29 scrub via a breach of Launch Commit Criteria (LCC) rules. 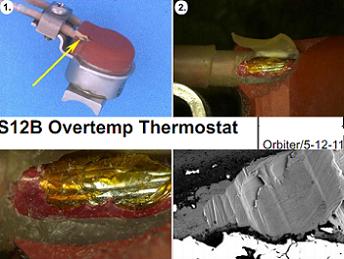 Passing flight rationale as an Unexplained Anomaly (UA), the Noon Board/Daily PRCB provided several fascinating baseline presentations into the overall issue (available on L2), work conducted to resolve the problem for the next attempt, and the potential root causes.

A large amount of focus continuing to be placed on the observation of a bare conductor on the S12B overtemp thermostat, which may have been affected during testing while Endeavour was inside her Orbiter Processing Facility (OPF).

The launch day article will focus on the large amount of content from Thursday’s PRCB presentations into the ALCA-2 issue.

(All images via L2, with addition to Larry Sullivan of MaxQ Entertainment/NASASpaceflight.com. The Launch Day article will be published ahead of tanking, with extensive coverage provided on the news site, forum and L2 special sections – the latter of which is the world’s best front row seat to Shuttle launches and missions, breaking every major event over the last 10 missions – including STS-134’s first attempt – before any other site, including NASA sites/TV).