written by Chris Bergin and Chris Gebhardt May 20, 2011 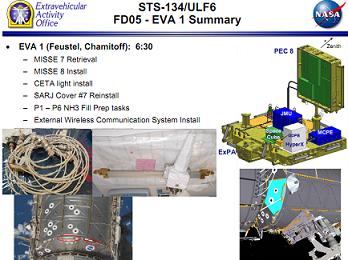 After waking up at 2226 EDT, Endeavour’s crew got right to work preparing for the mission’s first of four spacewalks.

Upon repressurizing the Quest Airlock (where Drew Feustel and Greg Chamitoff spent the night) from its overnight 10.2 psi campout pressure, the spacewalking duo enjoyed a brief hygiene break before re-entering the airlock which was promptly depressurized back to 10.2 psi.

Following ISS crew wake up, depressurization of the crew lock got underway. Once the crew lock was depressed, the outer hatch was opened and Feustel and Chamitoff took their spacesuits to battery power – officially beginning the EVA.

After exiting the ISS, Feustel and Chamitoff spent about 20mins setting up their various tools. Then, Feustel translated to the MISSE (Materials on ISS Experiment) 7 experiment and removed it from its current location on the Space Station and replace it with the MISSE 8 experiment. 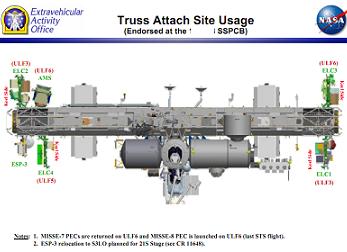 Meanwhile, at the tail-end of Chamitoff’s work on the SARJ, Feustel translated over to the P3/P4 truss and began work on ammonia jumper line installation.

Feustel next moved on to install the P6 EAS jumper before the spacewalking team tackled the Lab EWC antenna operation. However, due to a problem with Chamitoff’s CO2 sensor, 45 minutes-worth of the task has been moved to EVA-3’s timeline.

Feustel and Chamitoff split up and worked on mating various P3/P4 and P1/P2 connections for the duration of the EVA, which was the last task of the EVA.

The crew will then spend the remainder of the day conducting post-EVA servicing operations before heading to bed at 1326 EDT.

Endeavour continues to perform extremely well during what is her final scheduled mission for NASA.

Mated with the International Space Station (ISS), the youngest orbiter in the fleet continues to draw power from the Station-to-Shuttle Power Transfer System (SSPTS) without issue, allowing for her cryo margins to provide excellent mission length ability.

“Oxygen tank 4 pressure continues to increase due to nominal heat leak; the pressure in now at 800 psia. Fuel cell 1 H2 flowmeter continues to read high and erratic (not unusual). The fuel cells continue to operate nominally at low power levels in combination with the SSPTS.

However, despite the prospect of both a Focused Inspection and a Soyuz Flyabout being included in an already packed mission, the Mission Management Team (MMT) have no plans to extend the mission past the current 16+0+2 duration at this time, mainly in the thanks to the excellent work by the planning team on the ground, according to MMT chair LeRoy Cain.

While it has to be emphasized there is no risk to the vehicle or her crew, teams evaluated the potential need for a Focused Inspection on Endeavour’s Thermal Protection System (TPS). 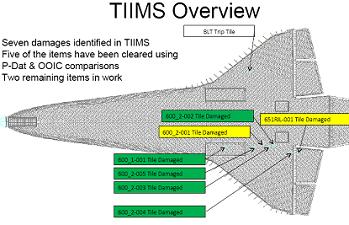 Seven areas were flagged via FD3 RPM imagery, requiring the Damage Assessment Team (DAT) to carry out their methodical analysis to evaluate the option of carrying out a Focused Inspection.

They immediately cleared four areas, ahead of a ding on Endeavour’s starboard Main Landing Gear Door (MLGD) also being cleared from any further inspections.

Two areas remained open from an assessment standpoint going into Friday, with one – on the inboard elevon – then cleared during Flight Day 5. The evaluations have been officially tagged as “MER-7 Tile Anomalies”.

“Seven damages identified. Five of the items have been cleared. Two remaining items in work. No downstream effects. 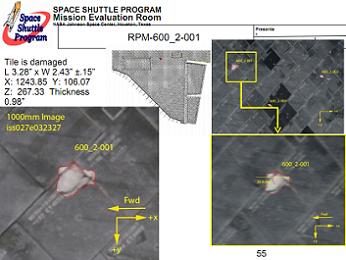 As explained by Mr Cain via one of his excellent overviews on the vehicle’s status, the DAT engineers expect to clear the inboard elevon damage from the need for a FI, but are less confident on being able to avoid a FI on the remaining area of interest, which is located between the starboard MLG and ET door. Clearing all areas with a FI remains a possibility.

“I feel pretty confident if, in fact, we’re not able to clear it by the morning, when we get the focused inspection data we’ll be able to clear this problem and not have to do anything,” noted Mr Cain on the main area of interest. “But having said that, we’re going to go do whatever is necessary and we’re going to follow the data all the way along.”

Although the ding’s appearance is – as explained by Commander Mark Kelly during on orbit interviews – by no means any worse than previously cleared damage, the photography of the area is slightly inconclusive, which may provide the main reason why a FI is still on the cards. 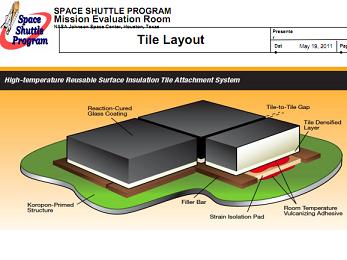 “RPM Imagery: Visual indications of RTV (filler bar) and dark line (abrupt change in depth). Three Dimensional data: Indications of ‘ledges/drop off’ in cavity. Decreasing thickness as you approach the edge,” added the DAT summary overview to the MMT.

“Historical Three Dimensional Accuracy: Good correlation between on orbit and post flight measurements. Confined to shallower damages (0.4” deep or less). Lone case of deep damage was STS-118. Poor prediction of deep portion (abrupt drop off). Predicted 0.5” VS FI depth of around 1.0” (partially due to shadowing). 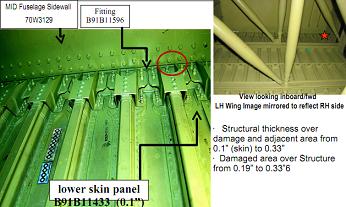 Work being conducted by the DAT engineers includes the utilization of their many analytical tools, along with their understanding of the underlying structure which the damage tile is designed to protect, and the use of flight history.

“Cavity definition: Utilize limited point cloud data from imagery lab to generate cavity. Create ‘shoe box’ cavity for use in thermal analysis. Two cavities (3-D and bounding 3-D),” was listed as forward work by the DAT on this specific area.

MMT concured with this finding.

A new article will be published later tonight overviewing the Focused Inspection plan and updated DAT information via L2 presentions.* 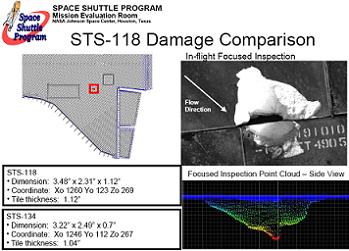 Flight history always plays a major role in TPS assessments, with STS-134’s ding no stranger to Endeavour from both a location, cause and appearance standpoint.

Only inches away from her STS-118 incident in 2007, the tile damage from that mission required a Focused Inspection, prior to being cleared for re-entry – a decision which was shown to be 100 percent correct, with hardly any ill effects observed on either the damaged tile or the underlying structure after examinations on the ground.

As was the case with STS-118, Mr Cain also explained that the damage is unlikely to have been related to a foam liberation event, with footage from the Solid Rocket Booster (SRB) cameras now showing what appears to be an ice liberation from an ironically named Ice Frost Ramp (IFR).

Two events around T+70 seconds have been observed on the footage, one of which is highly likely to have caused the damage on Endeavour’s belly.

With a Focused Inspection confirmed, documentation (L2) had already been drawn up on the procedures for both the Inboard Elevon damage and the aforementioned primary damage site inspections via the Orbiter Boom Sensor System (OBSS). This will now be implemented.

(Images via L2 and NASA.gov. Extensive coverage is being provided on the news site, forum and L2 special sections – the latter of which is the world’s best front row seat to Shuttle missions. With specific and extensive flight day coverage, from interactive “one stop” FD live coverage in the open forum, to internal documentation, photos, videos and content in the specific L2 FD areas).