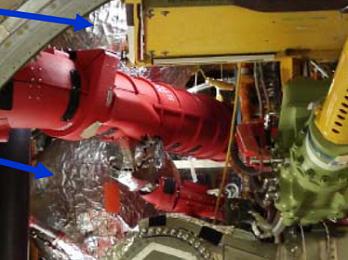 NASA managers have internally refined Endeavour’s troubleshooting schedule on Monday, placing STS-134 on a NET (No Earlier Than) launch date of May 10. The schedule continues to be provisional, as engineers press on with the complex work of replacing the Aft “Load Control Assembly” (ALCA-2) – the likely cause of the APU 1 heater failure during Friday’s countdown.

With Endeavour removed from her 72 hour scrub turnaround timeline – following the decision to cancel the attempt to launch on Monday – engineers at Pad 39A have been configuring the stack for an extended stay ahead of the next S0007 Launch Countdown for STS-134.

“The ET (External Tank ET-122) has been drained and all cryos have been boiled off. The RSS (Rotating Service Structure) has been rotated to the mate position and OWP (Orbiter Weather Protection) has been extended,” noted the NASA Test Director (NTD) update in status (L2). “Cathode activation is complete. GH2 T-0 system inerting is complete. Orbiter aft access has been established.”

Endeavour’s PRSD (Power Reactant Storage and Distributation) reactants have also been drained, while the OMBUU (Orbiter Mid Body Umbilical Unit) remains mated to the vehicle. It was during this operation that a new Interim Problem Report (IPR) was charged to STS-134’s flow.

However, this – as are many of the IPRs charged during a flow – is a minor issue, especially when compared to IPR-55 – the official log name for the Auxiliary Power Unit (APU-1) heater issue, believed to have been caused by a failed hybrid driver in Endeavour’s Aft LCA number 2 (ALCA-2), ultimately resulting in a breach of Launch Commit Criteria (LCC) rules and causing the scrub of the launch.

“Launch Countdown was scrubbed Friday due to IPR 134V-0055 detected after ET Cryo load. Operations for S0007 continued through the weekend to support a Monday launch attempt until troubleshooting revealed a bad power driver in ALCA2,” outlined a Monday status summary (L2).

“The troubleshooting data was presented to the management team on Sunday and a decision was made to scrub/secure from S0007 in order to fix the anomaly. The management team is expected to meet determine the next launch attempt.”

Although no official launch date has been set – and is unlikely to be set for some days as status on the LCA work is reviewed periodically – a managerial meeting on Monday afternoon opted to push the provisional launch date out to a NET May 10 target, from the previous May 8 NET target. This date also remains in the balance, given current Kennedy Space Center (KSC) schedules show a launch date target of May 11. 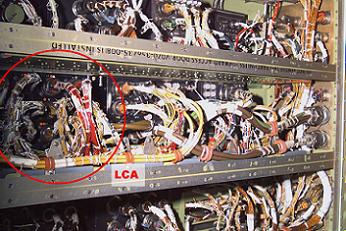 The plan is to meet again during the week, ahead of a Friday program-level meeting where managers will assess how the replacement work has progressed – given there are numerous variables in play, not least on the forensic investigation into the failed LCA, which has not yet been removed from Endeavour’s aft (update pending). The meetings will decide on whether to continue to press for May 10, or slip the target to the 11th or further.

Expanding on the engineering evaluation into the APU heater issue, the NTD overview was careful to caution that the absolute root cause is not yet completely understood, which also plays into the schedule considerations, as a full understanding is likely to be required prior to the integration of the spare LCA unit into Endeavour.

“IPR 134V-0055 to APU: Initially a single heater string (B) on APU 1 was found to not be operating. The redundant heater leg worked nominally but both heater strings are required. Troubleshooting over the weekend revealed the thermostats were performing nominally and the problem was isolated to a bad power driver within LCA2. The cause for this failure is still not completely understood,” the NTD added.

The methodical approach the engineering and technician teams are taking is typical practice for the numerous elements of the Space Shuttle Program (SSP), something which has served them well during previous troubleshooting efforts, such as with the Flow Control Valves (FCVs), for example.

So far, this approach has also managed to rule out several elements related to APU heaters as the cause of the failure, with a confirmed focus on the LCA and/or its directly associated hardware. 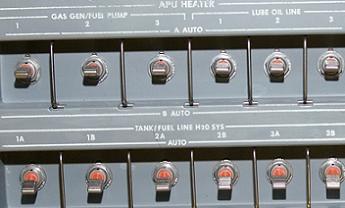 “Troubleshooting on Saturday 4/30, the team verified the fuses located in the forward cockpit switch on Panel A12 were good. The team then confirmed the original IPR condition and verified the Thermostat cycled on but saw zero current draw on the heaters string,” added another overview on Monday (L2).

“At this point, we verified no power output to the heaters, thus the failure is isolated to the ALCA2. The team then proceeded with additional troubleshooting and isolated the failure to the type III hybrid driver located within the Aft ALCA2.”

Finding a key suspect in the driver resulted in the Engineering Review Board (ERB) making the recommendation that the unit – or box as it’s sometimes referred to – needed to be replaced. However, this procedure has been waiting on power output results, as engineers look for a reason as to why the driver has shorted out, such as finding a path into what caused the driver – which may be a victim, rather than a cause – to fail. 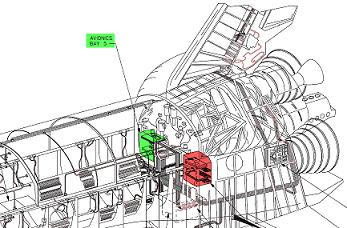 “Prior to ALCA2 R&R, the team is working to validate their previous troubleshooting by verifying the power output at the ALCA2 and by using an external power source and apply 28v to the heaters to validate the heaters string,” the overview continued.

“After ALCA R&R, (Electrical Engineers) will hipot all the orbiter wiring and possibly the heaters and thermostats to look for possible shorts that could have cause the ALCA2 drivers to go bad.”

This element of the evaluations was the main focus of Monday, with breakout boxes installed, while the team completed continuity and isolation checks, along with completing the external power application to the heaters to allow currents to be measured through the heaters.

Meetings are continuing to take place at an ERB level on the results of the power output checks of the LCA, as the absolute root cause is hunted down.

Also discussed earlier on Monday were impacts relating to the upcoming LCA retests – the two day process which will start once the spare LCA is installed. The discussion focused on the impacts to the task of ordnance disconnect for the retesting of the AFT Sep Fire 2 command indicator circuit, which is the driver for ordnance disconnect.

The decision taken at the ERB was to press forward with option two, to carry out partial ordnance disconnects, with a caveat that the AFT work is controlled and limited to the monoball and heaters troubleshooting areas.

(All images via L2, apart from lead image via NASA TV. Extensive coverage is being provided on the news site and forum, driven by the L2 special sections with further articles to follow).