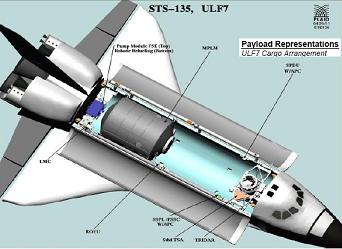 Atlantis has rolled over to the Vehicle Assembly Building (VAB) for mating operations ahead of her July mission to the International Space Station (ISS) – the final scheduled shuttle mission. NASA managers are expected to set a realigned planning date for Atlantis’ launch, which – according to preliminary schedules – ranges between July 10-12.

As with the final rollovers of Atlantis’ sisters – Discovery and Endeavour – the short trip to the VAB is taking longer than normal, allowing her engineering teams to pose for photographs to mark the historic occasion.

Atlantis entered the VAB and was parked in the transfer aisle, rolled in on top of the Orbiter Transporter System (OTS). Engineers are set to hook Atlantis to the sling which is connected to two cranes, which will be used to lift the orbiter off the OTS horizontally, prior to rotating the vehicle into a vertical position.

However, due to a lack of available engineers – given the mass redundancies over recent months – Atlantis will remain on the OTS overnight, as opposed to heading over to High Bay 1 (HB-1) on the same day.

“Atlantis is scheduled to rollover to the VAB this morning. First motion is scheduled for 0800 EDT. The vehicle will to stop for a photo opportunity (pending weather) before entering the VAB,” noted the NASA Test Director (NTD) processing update (L2) early on Tuesday.

“The vehicle is scheduled to be spotted in the VAB transfer aisle by 1400 and will remain on the OTS overnight. S0004 Orbiter/ET mate call to stations is scheduled for 0400 EDT tomorrow.”

Once lifted over to HB-1, she will be greeted by the last “new” External Tank (ET-138) which was originally set to fly with Endeavour on STS-134. ET-138’s role of carrying on the recent tradition of excellence from a performance and foam liberation standpoint has added importance, given STS-135 will be without the Launch On Need (LON) support of another shuttle.

Should there be a major problem with Atlantis on orbit, a contingency plan is in place to utilize the return of her four person crew via Russian Soyuz vehicles.

Work on the stack in High Bay 1 is coming to a close, ahead of welcoming Atlantis for mating – known as S0004 operations. While ET aft umbilical preparations are complete, along with the platforms in place for the joining of the orbiter with the stack, some minor work on the Right Hand SRB has been carried out during closeout tasks. 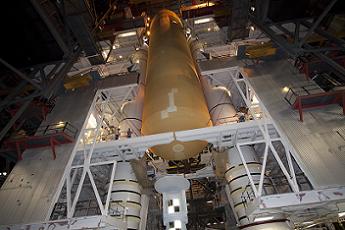 “The J2 connector is used during the Flight Battery load test and is not used during flight. Engineering gave approval to install the battery and (a report) has been generated for the missing bayonet pin.” 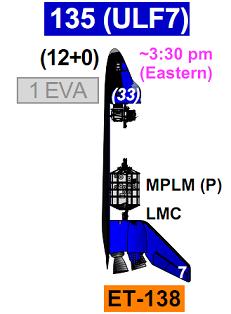 With departmental reviews already taking place ahead of the Flight Readiness Reviews (FRRs), a launch date will be evaluated over the coming days. Currently, preliminary timelines – based on Endeavour’s successful launch on Monday – range from July 10 and July 12, the latter of which is a KSC schedule.

“ULF7 (STS-135) launch will be in the July 10th timeframe due to the ULF6 KSC ground processing schedule. We will send out a new date when ULF6 (STS-134) gets off the ground,” noted the latest update via a Mission Evaluation Room (MER) note (L2). “Launch date should be set within a few days of STS-134 getting into orbit.”

The 12+0+2 day mission has a current launch window of 28 June through 31 July, although the mission has officially slipped into the second week of July due to Endeavour’s launch delay to allow for troubleshooting on her APU-1 Heater System.

A potential range constraint exists, with a Delta IV – carrying the GPS IIF-02 spacecraft – scheduled to launch on July 14. In the event Atlantis is unable to launch in July, a beta angle constraint begins on July 31, ranging through to August 15.

Atlantis will remain in the VAB until the end of the month, with a rollout date currently tracking June 1 – potentially leading to a historic day of Atlantis heading to Pad 39A at the same time as Endeavour returns home on the Space Coast. 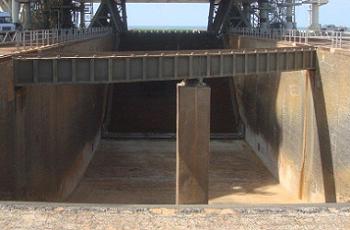 The rollout schedule will depend on how the STS-135 mating operations proceed in the VAB, along with the amount of time it will take to turnaround Pad 39A. The opening report from the pad shows the complex to be in a good condition, based on initial reports from engineers.