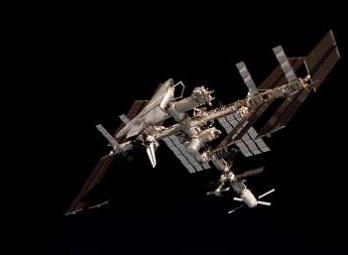 With the US Segment of the International Space Station (ISS) now complete, NASA managers are turning their attention away from the era of construction and maintenance of the station and toward the new era of utilization, which includes advanced technology demos ranging from beam energy transfer to robotic servicing.

ISS heading into its next phase:

As noted by Associate Administrator for Space Operations William Gerstenmaier at the Soyuz TMA-02M docking press conference last week, up until now, ISS managers and on-orbit crew time have been devoted to construction and maintenance of the ISS, and utilization activities have had to slot into the remaining time. However, in the new utilization era, the prime focus will be science activities, with maintenance activities slotting into the remaining time.

Following the completion of the STS-135 mission and the end of the Space Shuttle Program in July, the beginning of Expedition 29 in September will mark the official transition into the ISS utilization era, where, unlike in the assembly and maintenance era, a minimum of 35 hours of crew time per week will be devoted to science activities.

The main purpose of the utilization era will be to support space-based scientific research and develop technologies for human exploration Beyond Earth Orbit (BEO).

Now that the US Segment of the ISS is completed (bar the addition of potential future modules such as a Bigelow inflatable), the ISS has extraordinary capabilities to conduct research in space, the likes of which have never been seen before.

Due to its huge solar arrays and Ku-band antennas, the ISS has power and data capabilities which are capable of supporting multiple payloads, while also providing them with a long-term, stable platform on which to attach.

The benefits of this is that scientific payloads can be attached to the ISS without needing their own power supply, data downlink capability, and attitude control system, thus significantly reducing the cost and time required to fly an experiment in space.

Also, since payloads can be launched to the station on already scheduled rockets, they do not need to fund their own dedicated rocket, which further reduces the cost of the mission.

There will be many opportunities for external payloads on the ISS in the future, since every SpaceX Dragon vehicle will be capable of launching external payloads, as will the Japanese HTV, and also since the completed US Segment of ISS now has a full complement of external payload accommodation sites in the form of Flight Releasable Attachment Mechanisms (FRAMs), which provide structural, mechanical, power, and data interfaces to external hardware.

NASA is keen to utilise the available FRAMs and flight opportunities for external payloads, as seen in their plans for future experiments outside the station.

One area of research that ISS external payload sites are particularly useful for is Earth observation. In its 51.6 degree orbit, the ISS passes over roughly 75% of the Earth’s surface, which, while not as much as the 100% surface coverage of polar orbits, is sufficient to allow science instruments to observe much of the Earth’s atmosphere and surface. 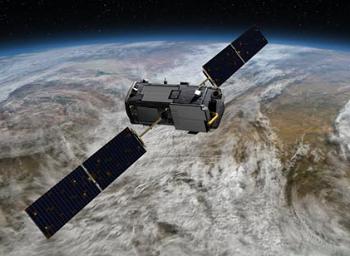 OCO is designed to measure global levels of carbon dioxide in Earth’s atmosphere, in order to gather data on global warming via the greenhouse effect. During launch in February 2009, the OCO-1 mission failed to reach orbit and was destroyed, but congress approved funding for a re-flight of OCO-1, called OCO-2, and launch is now expected in February 2013.

A publicly-available NASA document states that OCO-3 will be assembled using flight spares from the OCO-2 mission, for launch sometime in 2015. However, due to tight budgets, no funding exists for a spacecraft bus to provide power, data, and attitude control to OCO-3, and no money exists for a dedicated launch vehicle.

Thus, placing OCO-3 on ISS and utilising its power, data and attitude control capabilities, as well as launching on a rocket that is already scheduled and funded by the ISS Program, will allow the OCO-3 instrument to fly in space despite the tight budget of the project. This is one of the great benefits of the ISS – allowing small payloads to fly in space without the need for expensive supporting systems. 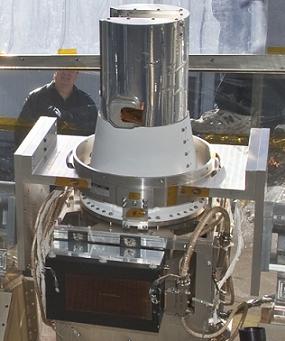 Another Earth observation payload set to fly on ISS is the Stratospheric Aerosol and Gas Experiment III-ISS (SAGE III-ISS), which is designed to measure ozone, water vapour and aerosols in Earth’s atmosphere.  As with OCO-3, SAGE III-ISS does not have its own dedicated bus to provide power, data and attitude control, since it is designed to use the ISS’ capabilities via the FRAM interface.

The first SAGE mission flew in space in 1979, followed by the SAGE II mission in 1984 (which led to the global ban on chlorofluorocarbons in 1987), and most recently the SAGE III Meteor-3M mission in 2001, which ran out of power in 2006 and was subsequently taken out of service.

SAGE III-ISS was originally scheduled to be attached to the station in 2005, but following a manifest change, the instrument has been sitting in a cleanroom for the last nine years waiting for a chance to fly in space.

The new commercial ISS resupply vehicles that will soon come online gave SAGE III-ISS that chance, and the instrument has now begun initial testing ahead of a planned launch on a SpaceX Falcon 9 rocket/Dragon spacecraft in 2014, whereupon it will be attached to an ELC FRAM with the Special Purpose Dextrous Manipulator (SPDM) “Dextre”.

In order to allow SAGE III-ISS to point itself toward specific parts of Earth’s atmosphere with high precision and stability, the European Space Agency (ESA) developed the Hexapod pointing system in 2005, as part of a barter agreement with NASA. The Hexapod has been sitting in a cleanroom ever since, but will now get a chance to fly in space with SAGE III-ISS. 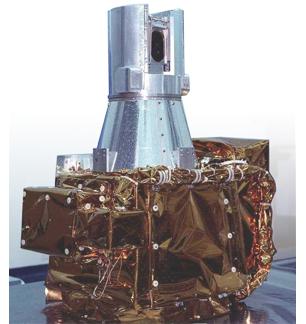 According to ESA info, the Hexapod pointing system consists of “six linear actuators arranged as three trapezoids and connected to a bottom flange and an upper platform. Varying the lengths of the actuators provides the possibility to control the attitude and position of payloads attached to the upper platform in six degrees of freedom.

The Hexapod has a pointing accuracy of ± 0.025 of a degree, a pointing stability of 0.0025 deg/sec, a pointing range equivalent to an 8 deg cone, and with an angular pointing rate of at least 1.2 deg/sec”.

As noted above, OCO-3 is also in need of a pointing platform. It is not known at this time whether a Hexapod will be used for OCO-3, but according to ESA “although originally tailored to meet requirements of NASA’s SAGE III, Hexapod can be adapted to support other ISS external payloads”.

Also being considered for ISS is an onboard telescope, although details of this proposal are not known at this time. “ISS/EA has agreed to do a feasibility study on a telescope to be assembled onboard and on a telescope platform”, stated L2 information.

Another area of ISS utilization being concentrated on by NASA’s Goddard Space Flight Center Satellite Servicing Capabilities Project (GSFC SSCP) is robotic satellite servicing. Given the cutting-edge robotics systems now present on the ISS, which are capable of being controlled from the ground, the ISS is an ideal testbed for robotic technologies and techniques, since individual satellite servicing demonstration payloads can be flown in space without needing their own robotic systems. 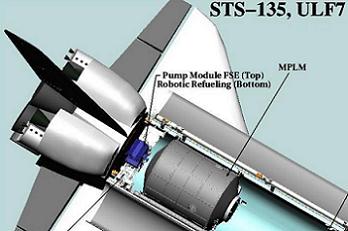 Launching on STS-135 in June will be a GSFC SSCP payload that will kick-off the era of robotics utilization.
Called the Robotic Refuelling Mission (RRM), the box-shaped payload includes four satellite servicing tools that will be grappled by the SPDM “Dextre”. The RRM also includes a selection of valves usually found on most satellites.

The SPDM will grapple and use the tools to demonstrate functions such as cutting through insulation, cutting wires, removing caps from valves, and transferring propellants.

The knowledge gained from the SPDM operations will aid the design and construction of new tools for future satellite servicing. The RRM will be installed onto ELC-4 via the FRAM interface using the SPDM. 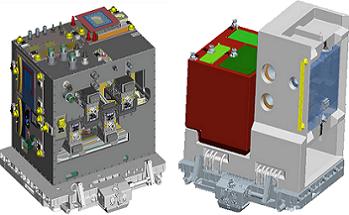 Another GSFC SSCP payload planned for the SPDM is Dextre Pointing Package (DPP).

The DPP payload will include instruments that can be grappled by the SPDM that will be used to determine their own attitude in space, and then use that data to control and point the SPDM.

This will demonstrate the ability for robots to autonomously orient and control themselves in space without the need for ground control. The DPP will be launched in April 2012 and attached to an ELC-4 FRAM, alongside RRM.

Another interesting prospect for satellite servicing demonstrations at the ISS involves Robonaut 2 (R2), which was launched to the ISS on STS-133 in February, and is still awaiting Activation & Checkout (ACO). Eventually, Robonaut managers plan to upgrade R2 to give it the capability to perform EVAs outside the station, but a note received on L2 stated that “GSFC has inquired about using a Robonaut for autonomous satellite servicing – possibly a one-way mission for the Robonaut”.

According to notes on L2, NASA managers are also discussing the prospect of a beam energy transfer demonstration on the ISS, whereby the ISS would wirelessly transfer electrical energy from itself to an orbiting Falcon satellite.

The ISS is particularly useful for this application due to the large amounts of solar power available via its large solar arrays, which will mean that a beam energy payload can be developed and flown without its own set of large solar arrays, thus reducing the cost and development time of the payload.

“Working on a technology development project candidate with the Glenn Research Center (GRC) team for a beam energy transfer demo on ISS. Have two meetings a week to support a proposal for a beamed energy transfer from Station to a Falcon satellite. GRC is the lead, partnering with the Air Force”, stated notes on L2.

The notes went on to mention “Completed the proposal writing for the power beaming energy transfer for a demo on ISS to a Falcon satellite. The proposal has been submitted through Glenn Research Center”. 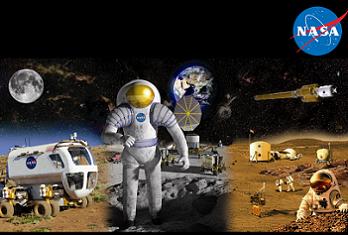 A presentation obtained by L2 states that NASA intends to use the ISS to complement existing BEO exploration analogues, such as Desert RATS and NEEMO, as some tests and technology demonstrations are much better performed in the space environment, with real crewmembers and real spaceflight conditions.

In order to meet this requirement, NASA’s ISS Program and Exploration Program have initiated the ISS as a Testbed for Analogue Research (ISTAR) project. ISTAR will look to solve Exploration Developmental Test Objectives (xDTOs), which, according to the L2 presentation, are “treated as ISS payloads for manifestation, prioritisation, and potential implementation”.

The two big xDTOs that NASA would like to concentrate on are communication delays and crew autonomous planning and execution, since both xDTOs go hand in hand with each other. Both xDTOs are also extremely relevant to future human exploration missions, since communication delays will increase as astronauts move further away from Earth. 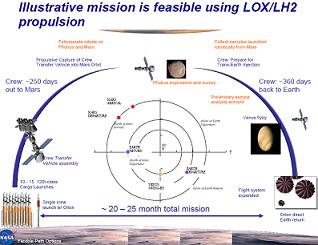 On the ISS, it only takes a few milliseconds for a communication signal to reach the station from Earth, although a small delay is incurred from the number of communication devices the signal is routed through.

As such, for a human BEO exploration mission, the current highly-involved role of Mission Control, which oversees every astronaut activity in great detail, will change to a less-involved role of Mission Support, which will only be called upon by the crew in the event of a major problem. Therefore, astronauts will need to have much more control of their own activities and timelines on future BEO missions.

These communication delays, as well as the previously listed xDTOs, are currently scheduled to be implemented as early as March to September 2012 (Expeditions 31 and 32), and continue throughout future Expeditions.

As NASA prepares to move out of the Space Shuttle era and refocus its attention towards BEO exploration, the ISS can provide a remarkable testbed for new technologies and techniques that will need to be acquired before humans can venture beyond the confines of Earth’s orbit.