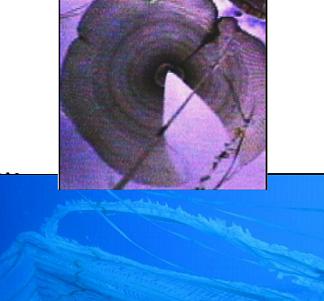 A critical step in the process of clearing STS-135/Atlantis and her systems for flight has been completed in the form of the In-Flight Anomaly Review (IFA Review) for the previous program flight: STS-134/Endeavour. Particularly, Endeavour’s booster rockets were shown to have performed excellently during the May 2011 retirement flight of OV-105, with only one outstanding issue requiring further program action before Atlantis lifts off next month.

As expected based on an excellent flight history, the Solid Rocket Booster (SRB) systems on STS-134/Endeavour performed extremely well during the May 16, 2011 launch. Only five items of interest of were noted on the booster systems during the standard In-Flight Anomaly (IFA) baseline report to the Space Shuttle Program.

In fact, only two of the five reportable squawks on the SRBs were worthy of IFA status: a Right Hand (RH) SRB main parachute failure and a separation debris event recorded by one of the RH engineering cameras on the SRB itself.

For the parachute failure, the SRB IFA presentation notes that a “Parachute tear was observed during diving operations. DAS video verified failure.”

The parachute failure, identified as a tear in the main chute, did not affect ascent performance of the SRB systems and has been classed in the Criticality 3 category.

Moreover, the loss of only one chute still ensured the safe splashdown and recovery of the SRB. Nonetheless, an SRB IFA was declared and an Anomaly Resolution Team (ART) formed to investigate the failure.

To date, the ART has reviewed DAS accelerometer data, which indicates that the “second disreef occurred earlier than experience although within requirements.”

Further post-flight inspections revealed damage at “gore #26” on the parachute, damage that extended through the length of the chute.

An initial fault tree has been developed and a detailed inspection and photographic work-up of the damage hardware and pre-flight processing images is underway.

While investigators will make every effort to find root cause for this problem and ensure that it does not exist on STS-135’s SRBs, it is highly unlikely that this issue would cause any kind of delay to the STS-135 mission given that flight’s status as the final Program Flight.

However, the second IFA declared for STS-134’s SRBs is of a more serious nature, though significant progress is being made and is not expected to be an issue for STS-135’s launch on July 8. 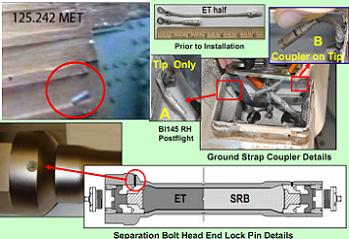 This IFA was declared to document the liberation of a single piece of debris at MET (Mission Elapsed Time) 125.242 seconds near the RH SRB forward attach point to the External Tank (ET) during SRB separation.

The ART quickly identified all potential sources for the debris from the forward assembly and compiled supporting and refuting data for each item to expedite the review and identification process.

This refuting and supporting data was compiled in part based on post-flight inspections of the SRB structure and systems. 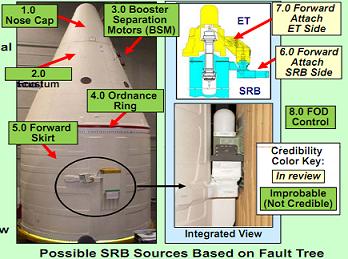 From this compiled list of candidates, two gained mention in the SRB IFA review, with the first being a Ground Strap Coupler which was found to be missing during post-flight inspections.

The Ground Strap Coupler is used as a connection between the returned and non-returned ground straps between the SRBs and the ET.

The second though less-likely source for the debris is the Separation Bolt Lock Pin which is used to stake an insert on the ET-side of the hardware.

Since the ET-side of the hardware burns up in Earth’s atmosphere follow Orbiter/ET separation, it cannot be confirmed whether or not this component was still attached to the ET hardware following SRB separation.

As with the SRBs, Endeavour’s RSRM components performed splendidly during both of Endeavour’s 43-hour launch countdowns, with the IFA report from ATK – the parent company of the RSRMs – indicating that “All RSRM countdown parameters were within LCC/OMRS limits and within family.” 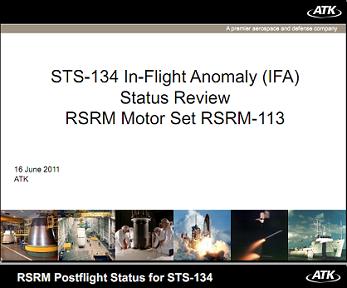 Likewise, ATK’s IFA presentation to the Space Shuttle Program (SSP) revealed that the performance of both STS-134 motors and their associated Booster Separation Motors (BSMs) was excellent and “well within CEI requirements.”

At the time of the IFA review on June 17, RSRM post-flight hardware evaluations were ongoing at the Kennedy Space Center, as were BSM inspections.

In Utah, at the production facility of the RSRMs, nozzle disassembly began June 16.

To date, no (ZERO) IFAs on the RSRMs have been declared and only eight squawks have been identified for further evaluation. Of the eight squawks, only six gained specific notes from ATK as part of their thorough IFA presentation to the SSP.

As noted in ATK’s IFA presentation, “An area of foam loss was noted at approx 300-degrees on the RH center stiffener ring. Exposed surface was heavily sooted.” 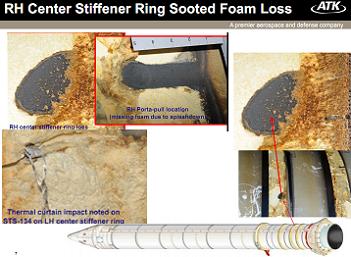 The resulting exposed area was elliptical in shape and carried dimensions of ~6inches x 3inches.  An engineering estimate on the mass of the missing stiffener foam registered at 0.2  lbs – with a conservative risk assessment prediction of 0.218 lbs.

Analysis of the area indicates that the foam loss occurred AFTER the rocket motors had separated from the STS-134 stack. This was confirmed via RH RSRM photos showing “a porta-pull location (on-motor pull test for foam process verification) on the RH motor. Sooted area in the photo is exposed during the foam pull testing and sees full ascent, plume impingement and reentry heating.

“Right hand photo shows Foam missing surrounding the sooted area was due to splashdown as shown by the lack of any stain or darkening.”

These photos were then compared to photos of the LH RSRM which displayed pieces of thermal curtain embedded in the stiffener foam. “Foam loss to bare case is lightly sooted showing this to be a reentry event with exposure to less than the full reentry heating,” notes the IFA presentation.

Here, the LH impact confirmed previous held beliefs that thermal curtain impacts on the RSRM stiffener foam can cause “bare case” exposure to the RSRM during the reentry environment.

“Comparison of the lab analysis of the residues in the three sooted areas and earlier test results showed that the RH foam loss occurred early in reentry heating.”

Therefore, there are no concerns with materials or foam processing and this squawk is not a risk to STS-135/Atlantis’s ascent next month as the foam loss does not violate previous flight rationale. 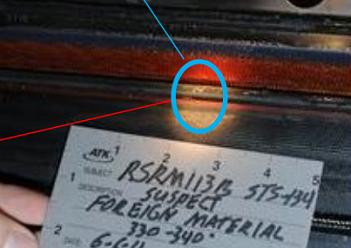 The second squawk mentioned in the IFA report was due to an unknown material on the RH Nozzle-to-Case Barrier O-ring.

The presentation notes that an “Unknown material (white/clear) was found on the surface of the barrier O-ring.”

Initial lab results indicate that the material is an adhesive from Teflon tape that is used in the area during nozzle installation.

“Material is suspected to have been moved over O-ring footprint during disassembly as no indent was noted on O-ring,” added the presentation.

This is not a constraint to STS-135 since the material is “gel-like and compliant and would not indict nozzle-to-case joint leak check even if was on footprint.” 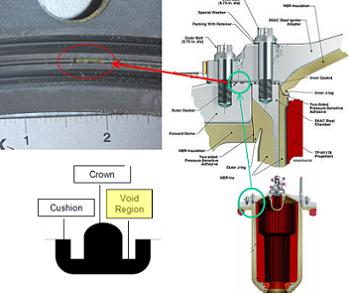 The third squawk was a grease blockage of a leak check groove in the LH Igniter Outer Gasket. “Excessive grease was observed in the STS-134 (RSRM-113) leak check transmission groove at approximately 135 degrees,” notes the STS-134 RSRM review presentation.

The grease is usually located in the void region of the gasket sealing element and can be removed from the groove region by Mylar film.

Since the igniter outer joint leak test is performed at a low bolt torque of 20 – 25 ft-lb, excess grease will not extrude from the void region until torque values are higher than 150 ft-lb. Therefore, there is no way for the grease to block the leak check groove at the leak test torque level, and there is no concern for STS-135. 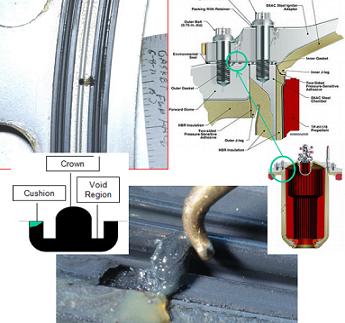 “The gasket crown (not the cushion) is the sealing element for the gaskets and is deformed during installation to provide the seal.”

Here, the flight concern revolves around whether or not rubber damage could compromise the gasket seal (crown) and potentially “challenge” other hardware functions.

Therefore, rubber can extrude into the thru-hole at assembly and at motor pressurization, a dome movement could result in a shear-off of extruded rubber cushion.

However, there are “No credible scenarios for potential overlap to result in inadequate leak check, damage to crown, or misplaced rubber material to affect seal integrity.”

A review of all data on the RSRM-114 set on STS-135 revealed no potential overlaps with the crown. 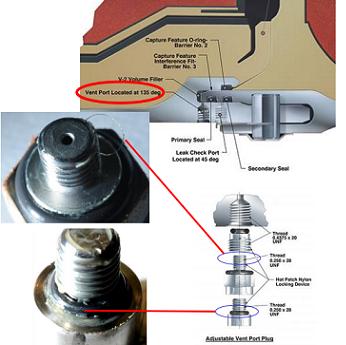 “An impression was also observed remaining in O-ring surface. At this point, the two fiber appear similar and are being analyzed to determine type and size.”

Finally, the last squawk on the STS-134 RSRMs was a retainer surface indication on the LH igniter outer gasket.

The gasket has been shipped to Utah for lab analysis.

(All images via L2 acquired presentations – STS-134 IFA Review for SRB and RSRM. Post STS-134 coverage of Endeavour is continuing in L2, which will follow Endeavour all the way to her retirement home in California).