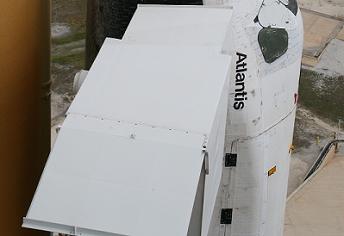 As the procession of “lasts” continue for the Space Shuttle Program (SSP), Atlantis is undergoing her final pad flow ahead of the STS-135 mission in July. No Interim Problem Reports (IPRs) are being worked at present, bar checks into the stack’s systems following a thunderstorm, which registered a lightning strike near the pad, coupled with a small water intrusion on the orbiter.

Atlantis – known to internally to some engineers as the orbiter with the most diva-like tendencies – lived up to her reputation, as she waited impatiently for engineers to fix a late issue with a Crawler Transport (CT) system ahead of rollout, before proudly parading under the floodlights to the massive crowd in attendance to watch the slow crawl to Pad 39A.

While waves of tankers full of Liquid Oxygen (LOX) and Liquid Hydrogen (LH2) continue to replenish the spheres at the pad complex, engineers have been working through the initial flow operations to hook up the STS-135 stack with the launch pad.

Integrated power up was achieved at 7am local on Wednesday morning, allowing for an Auxiliary Power Unit (APU) hotfire and the testing of Atlantis’ Reaction Jet Drivers. The Engine Firing Readiness Test (FRT) and Helium Sig Test was also carried out on Thursday.

However, the protection of the RSS and associated weather protection did not occur in time to stop Atlantis of receiving a soaking during a localized thunderstorm, which resulted in a small water intrusion, via a leak in the White Room hatch located on the end of the Orbiter Access Arm (OAA).

“Due to the weather a leak around the White Room hatch seal allowed a small amount of water intrusion inside the forward of the orbiter,” the NTD report added. “The water was isolated to just inside the hatch near the Waste Containment System (WCS) and was cleaned up.”

The main area of concern, as much as it appears the stack suffered from no ill effects, was a lightning strike near to the recently arrived Atlantis stack, which was still without the protection of the RSS. However, the lightning mast on top of the Fixed Service Structure (FSS) would have provided protection had a strike directly impacted the pad structure. 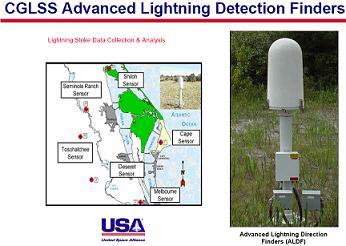 “Adverse weather rolled through the area early Wednesday. A lightning strike was detected within 0.32 nm of Pad A by CGLSS (Cloud to Ground Lightning Surveillance System); StrikeNet measured it at 0.87 nm. Initial analysis indicates very limited concern but engineering will continue their evaluation,” the NTD confirmed.

“Appropriate evaluation operations from S0018 (Adverse Environment and Lightning Procedure) will pickup this morning. (Op 11 & 12 for lightning and Op 210 for water intrusion).” 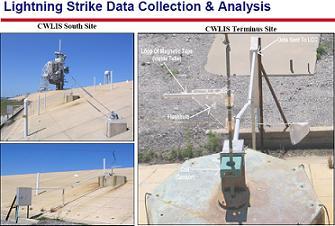 The hardware elements of the overall lightning detection system were also modified ahead of STS-117′s launch.

“LIVIS Background: Designed 25 years ago as an advisory tool. Limits were originally determined through modeling and analysis. Analysis based on an anticipated transient value produced as a result of a 100KA lightning strike to the ET,” noted one of seven presentations related to the system (available on L2). 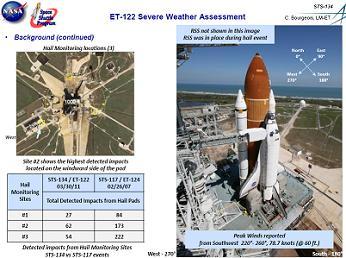 “CGLSS reports are posted at the beginning of each hour and captures all lightning strokes (1st return stroke only) that have during the previous 60 minutes that have occurred within 5NM of Pad. Four Dimensional Lightning Surveillance System (4DLSS) being certified that will capture all return strokes.

“Cape Weather provides an automated Pad Overview Plot showing position of lightning strike(s), within 0.45 NM, in relation to the Pad.

The CWLIS – which is a system that provides adequate lightning detection on the lightning mast and catenary wire – utilizes two current sensing coils, one on each end of the catenary wire connected to high-speed digitizers. 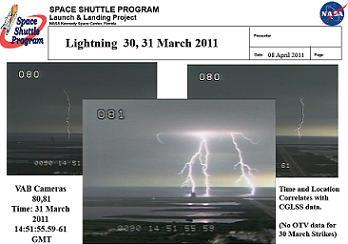 Visible indications of lightning strikes are captured on numerous cameras placed in view of all areas of the pad and from the roof of the Vehicle Assembly Building (VAB) – as used ahead of STS-134’s launch, when one lightning strike was determined to be within 0.45NM, while others were classed as out at sea.

Some of the cameras around the pad were repositioned during the upgrades to the lightning detection system back in 2007, allowing for additional views of any lightning strikes on the pad.

The pre-set plan for the observation of a lightning strike at the pad – put into effect for the latest lightning observation – was also noted in the system overview. 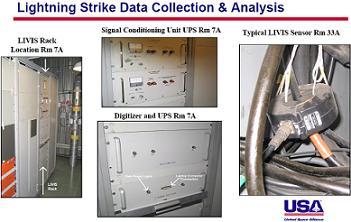 “Decision Point: IF a lightning event was confirmed via LIVIS, CWLIS, CGLSS or OTV, THEN perform lightning strike work steps/data gathering and analysis. OTV/CGLSS will be used to determine whether a lightning strike has actually occurred within the Pad perimeter,” added one presentation.

“If unable to verify that the lightning strike was outside of the Pad perimeter, and CWLIS or LIVIS indicates that a lightning event has occurred, then the conservative approach is to be taken, and the data collection and analysis process performed.

“If able to confirm that lightning strike occurred outside of the Pad perimeter and there are no CWLIS and LIVIS indications of a lightning event, then the data collection and analysis process is not required.”

As engineering teams confirm the stack is in good health, which is expected, S0024 Pre-Launch Propellant Servicing preparations are picking up, ahead of Hyper Loads which are set to begin next Monday. The Tanking Test remains on the schedule for June 15.