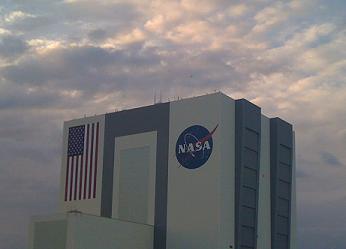 Kennedy Space Center (KSC) Director Bob Cabana has spoken of his emotions during and after the final NASA Space Shuttle mission, ranging from launch day, through to seeing Atlantis return to her final resting place. Despite being known as a huge advocate of the transition to commercial launches, Mr Cabana chose to focus on the loss of the American icon that is the Shuttle.

The retired USMC Colonel arrived at the spaceport expecting – as many did – for the weather to provide a stay of execution for what was to be the final shuttle launch.

Once the Mission Management Team (MMT) Tanking/Weather brief decided to give the conditions a chance to provide a break in the weather, Mr Cabana noted how the enormity of the occasion started to hit home.

“I think part of it was that it finally hit me, the enormity of it all, that this was the last time we were going to launch a Space Shuttle at KSC. The end, that I said would soon be on us almost three years ago, was finally here, and it was hard to believe.”

With Atlantis’ External Tank (ET-138) fully loaded – notably without any of the issues which had challenged the talented KSC teams over recent years – the weather continued to show only a 40 percent chance of acceptable conditions at T-0.

However, as the countdown continued to tick down, and with Atlantis’ crew now onboard the vehicle, only the Return To Launch Site (RTLS) weather – a requirement for acceptable conditions in the event of a serious issue during the early stages of the launch resulted in a risky abort to  bring Atlantis around for a landing on the Shuttle Landing Facility (SLF) or bailout in the Atlantic – threatened to put pay to the attempt.

“As the next six hours toward launch progressed, it seemed more and more likely that the weather was going to cooperate, that we had a shot at getting Atlantis off, but it wasn’t a given even till the very end,” Cabana recalled.

“Even though launch weather was green, we couldn’t get a go forecast for RTLS, even with Rick Sturckow in the weather aircraft saying it was “a really, really big hole,” and he couldn’t see anything that was an issue.” 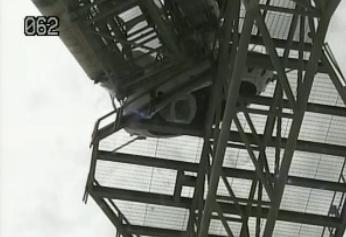 In the end, the teams in the Firing Room made a decision to issue a waiver and trust the observations of the STS-128 commander, allowing for the final hurdle to be cleared for launch – or so they thought, as a failed indication to confirm the full retraction of the GOX Vent Arm held the countdown at T-31 seconds, with only a short four minute window to resolve.

“Just to add a little more excitement to an already exciting event, the team flawlessly deals with a GLS (Ground Launch Sequencer) hold at 31 seconds, and gets Atlantis off with 58 seconds to spare,” added Mr Cabana, who continued by speaking about his emotions of the launch.

“No matter how many launches I have seen, I am always touched by it, and I am always anxious. I breathe a little easier 2 minutes and 5 seconds into the flight when the solid rocket motors fall away. 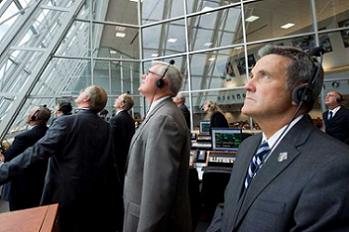 “I watch closely with our new cameras that enable us to monitor debris from the tank and can finally relax when MECO (Main Engine Cutoff) arrives with no anomalies.

“It is so much easier to fly it than to feel responsible for some of your closest friends as they ride that ball of flame into space.”

After Atlantis successfully made orbit, Mr Cabana had to face the teams responsible for the safe launch, knowing many of them had just come to the end of their careers.

“Recognizing the launch control team post-launch was an emotional event. It’s hard when you have the finest group of professionals anywhere, who have dedicated so much of their lives to the success of America’s space program, and you know many of them would be leaving the firing room for the last time. 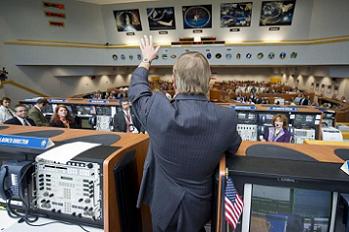 “I would imagine that it was much the same after the last Apollo launch.  It will be awhile before we staff the firing room to send astronauts on a mission of exploration from Complex 39 again, but just as it happened after Apollo, it is going to happen after Shuttle also.

“I rode an emotional rollercoaster the rest of the day after launch.  There were tears and happiness, one following right after the other, on and off, as I talked with the team and hugged and shook hands with as many people as I could at the barbeque”

The overall feeling was one of pride for the workforce, who he feels – for the ones remaining at least – will be up for the challenge of the transition, based on their ability to overcome the challenges in their day to day jobs.

“Words cannot express the pride I have in all of you and how privileged I feel to be part of this team at this time in history. This is not easy, and we have challenges in front of us. However, there’s no doubt in my mind that we will be successful, because I know what you’re capable of when you’re given a challenge and a mission to accomplish. You have demonstrated it time and again,” he added.

“Thank you all for your tremendous dedication and sacrifice to ensuring these last Shuttle missions were executed better than ever before. You are absolutely the best, and it’s a privilege to serve you.” 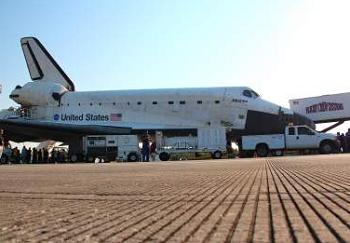 In a second address after Atlantis’ return to Earth last week, Mr Cabana looked back over the entire history of the Space Shuttle Program, echoing a point made by NASA administrator Charlie Bolden – that the Shuttle will be admired for hundreds of years to come.

“It’s bittersweet as Atlantis comes home where she will forever stay. I couldn’t have more pride in this Space Shuttle team for your service to KSC, NASA, and America. What this team has accomplished over the past 30 years will be talked about and admired for generations to come,” noted the four-time Shuttle astronaut.

“We have accomplished what no one else has been able to do. The Space Shuttle program has launched, recovered, and repaired satellites; conducted cutting-edge scientific and medical research; and built the largest structure in space, the International Space Station.

“This last launch and landing of STS-135 is the culmination of a phenomenal program that includes three decades of space exploration, scientific discovery, international partnerships, and fulfilled dreams.” 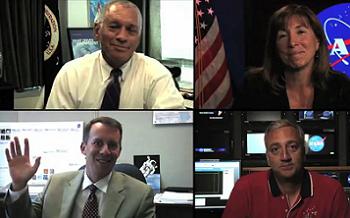 Specific to the teams which have cared for all of the NASA orbiters, Mr Cabana spoke openly about how the iconic ships and their teams will be sorely missed – a refreshing attitude compared to the recent NASA PR exercise of endorsing a fast-talking youtuber to gleefully compare the end of the program to that of a sitcom cancellation, accompanied by NASA leaders grinning and waving into the camera.

“The people who dedicated so much of their lives to the orbiters, starting with Columbia and continuing with Challenger, Discovery, Atlantis, and Endeavour, are part of our family and will be greatly missed,” Mr Cabana wrote, as 1,500 of the KSC workforce were laid off at the end of last week.

“The Space Shuttle is an American icon and resonates in the heart and soul of every one of us. Leaving a legacy is part of what drives every man and woman involved in the space program, and we have the unique opportunity to pass on a one-of-a-kind heritage.

“We were given the responsibility of bringing the Space Shuttle program to a safe and successful close, and we finished strong, taking personal and professional pride in helping to preserve this remarkable inheritance for future generations.” 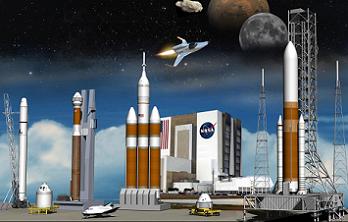 Mr Cabana did end on a positive note, putting his backing behind the United States to continue to use the inspiration of human space flight, which he is tasked with ensuring KSC is the lead center for such missions in the future.

“It is hard to believe the final mission, that I said almost three years ago would soon be upon us, is finally here. But more than the Space Shuttle, it is human space flight that inspires us and the future explorers of tomorrow.

“We will continue to lead in space exploration and be part of something much larger than ourselves. KSC has been, and will continue to be, the premier launch complex for sending humans and payloads to space.”

(Images: Via L2, MaxQ Entertainment (Larry Sullivan and Brian Papke) and NASA.gov/NASA TV. Further articles on Atlantis will be produced during her down processing, driven by L2′s STS-135 Special Section which is continuing to folow the mission at MMT/MER level through to post flight IFA, surrounded by a wealth of FRR/PRCB/MER/MMT and SSP documentation/pressentations, videos, images and more.