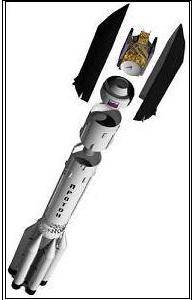 International Launch Services (ILS) have launched their Proton-M rocket again on Friday, as the workhorse lofted the SES-3 and KazSat-2 telecommunications satellites – the first “shared” ILS Proton launch – into a geosynchronous transfer orbit. Launch from the Baikonur Cosmodrome in Kazakhstan was on schedule at 23:16pm UTC, ahead of over nine hours of flight – which was successfully concluded with both birds deployed.

SES-3, the 45th satellite in the SES fleet, is part of a total fleet of more than 40 satellites of parent company SES. The satellite is expected to replace AMC-1 at 103 degrees West longitude in mid 2012 and provide continuity of service to the enterprise, government and media sectors from the center of the North American arc. 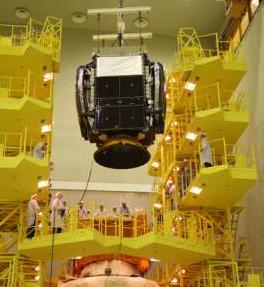 SES-3 will be the home of key media companies delivering educational, international and high definition video channels throughout the U.S. The satellite will also be powering mobile communications, private networks and thousands of VSAT terminals for the enterprise community.

SES-3 is the third satellite in a new generation of SES WORLD SKIES satellites bearing the “SES” name, joining the existing line of AMC satellites over North America and the NSS satellites covering the rest of the world.

The Orbital Sciences Corporation bird consists of 24 C-band, 24 Ku-band, 500 MHz Ka-band, and has an anticipated service life of 15 years.

The Proton M launch vehicle, utilizing a 6-burn Breeze M mission design, lifted off from Pad 39 at Baikonur Cosmodrome, Kazakhstan, with the SES-3 satellite on board. This a shared launch configuration, where the SES-3 satellite is launched while mated to the top of the KazSat-2 satellite.

The first three stages of the Proton used a standard ascent profile to place the orbital unit (Breeze M upper stage and the SES-3 and KazSat-2 satellites) into a sub-orbital trajectory.

From this point in the mission, the Breeze M performed planned mission maneuvers to advance the orbital unit first to an elliptical parking orbit, then to an intermediate orbit, followed by a transfer orbit, and finally to a geosynchronous transfer orbit.

This was the 66th ILS Proton Launch Overall and the 365th Proton mission since 1965.