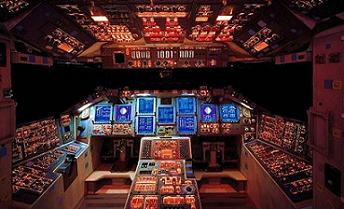 Atlantis has docked to the International Space Station (ISS) – one final time – following an emotional R-Bar Pitch Maneuver (RPM) and text book approach to the orbital outpost. Her mission performance continues to be exemplary, as the Damage Assessment Team review the health of the Thermal Protection System, in tandem with data from the orbiter’s Wing Leading Edge Impact Detection System (WLEIDS).

This was Atlantis’ 19th docking to a Space Station – based on a total of seven dockings to the Russian space station MIR, and 12 to ISS – placing her in history as the single vehicle with the most space station dockings.

This was also the 36th docking of Shuttle to ISS and occurred on the 37th Shuttle mission to ISS (STS-88/Endeavour did not dock to ISS – after that mission involved the maneuvering of Unity onto the ODS (Orbiter Docking System) with the SRMS (Shuttle Remote Manipulator System) before grappling the Russian module already in orbit and mating it to Unity).

The crew awoke ahead of a busy Flight Day 3 to Mr Blue Sky by the Electric Light Orchestra, played for Atlantis’ commander Chris Ferguson, as Atlantis herself put on a light show via a serious of burns to close in on the ISS.

A minor hiccup was noted during the early part of the Flight Day, when Atlantis’ GPC-3 (General Purpose Computer) suffered a problem. However, this held no impacts for the rendezvous and docking phase of the flight, given the redundancy, and is no concern given it should return to action, along with no further GPC failures expected. Losing two GPCs would be more of a concern.

“During the set expansion for rendezvous, when the GPC3 MODE switch was taken from HALT to STBY, the GPC temporarily joined the common set then failed out of the common set,” noted the Mission Evaluation Room (MER) report.

“The crew reported that the mode switch was in the STBY position and both the MODE and OUTPUT talkbacks were barberpole.”

This was the same GPC which suffered a similar issue during Atlantis’ STS-122 flight, which also included STS-135 mission specialist Rex Walheim, allowing for a quick-witted CAPCOM Steve Robinson to joke “You can draw your own conclusions, but it’s the same GPC, on the same orbiter, and the same MS2.” 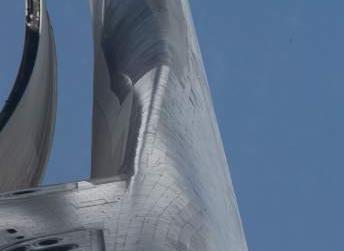 With Atlantis arriving on time on the R-Bar underneath the Station, Commander Ferguson took the controls and guided her through the 360 degree backflip, the final time an orbiter will conduct the RPM under the Station they helped to build.

As Atlantis then moved on to the TORVA (Twice Orbital Rate V-bar Approach), the orbiter was placed in front of the Station, smoothly entering final approach, prior to a perfect docking at 10:07 Central time. With leak checks carried out ahead of schedule, the joint crews opened their respective hatches for a 11:47 Central time welcoming ceremony, officially starting the docked phase of the STS-135 mission.

As to when Atlantis will depart, the likelihood the MMT will approve a one day extension is being aided by some excellent cryo management with the orbiter, currently show a margin of 1 day and 3 hours, another increase from the Flight Day 2 status on consumables. 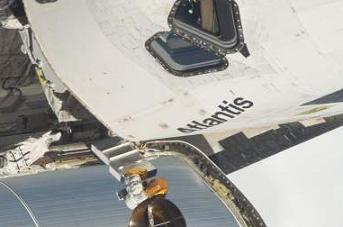 By this time Atlantis docked, the ISS crew had already started to send the massive dump of photographs taken of Atlantis during the RPM to the DAT engineers in Houston.

The hundreds of images consisted of 400mm, 800mm and 1000mm photos (several hundred megabytes of which have already been uploaded on L2’s STS-135 Special Section).

The stock of imagery will be evaluated by the DAT over the next few days, via a Level I, Level II and Peer Review, with an aim to provide a recommendation to the MMT (Mission Management Team) to clear Atlantis for Entry, usually within a few day’s time.

Good news has already been reported to the MMT via the Flight Day 2 opening inspections via the use of the Orbiter Boom Sensor System (OBSS), after all “Regions Of Interest” were passed as no concern for the same entry of Atlantis.

UPDATE: Late on Flight Day 3 the crew were informed that, pending a peer review, the DAT engineers have found no areas which would require a Focused Inspection, confirming the orbiter has a very clean TPS. Only five minor areas will be fully evaluated over the next dat or so. 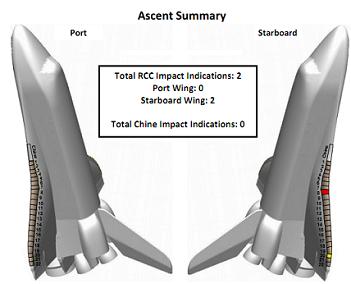 As reported to the Mission Management Team (MMT) in the Launch +12 Hours STS-135 In-Flight WLEIDS Report, Atlantis’ WLEIDS system worked perfectly and registered only two potential impacts – both on the vehicle’s starboard wing.

As noted in the presentation, available for download on L2, “All 96 WLEIDS ascent summary data files was downloaded and down linked successfully. Eight (8) half-second windows of detailed G time histories were downloaded in order to confirm the implication of cases above 1 Grms.”

All background noise and RCC settling levels for STS-135 were in family with background levels observed on previous missions. While there have been no WLEIDS anomalies reported or identified, there was minor “noise” on the port wing 11/12 RCC (Reinforced Carbon-Carbon) panels observed late in the ascent of Atlantis.

Overall, the L+12 Hour report revealed one possible impact location/event and one “questionable” indication on the starboard RCC panels of Atlantis during her climb uphill.

There were zero impact triggers on the port wing of Atlantis and zero trigger indications on both her port and starboard Chines. The one confirmed trigger that could indicate a possible impact on Atlantis’ WLE RCC panels occurred on Starboard panel 8. 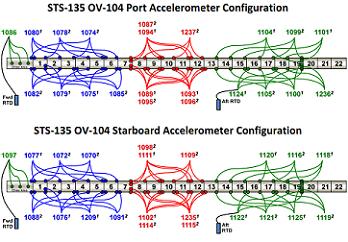 The sensors on this panel – as well as sensors in the immediate surrounding areas, registered a potential impact event at Mission Elapsed Time (MET) 109.6 seconds – or 1 minute 49.6 seconds after liftoff from Pad 39A.

The impact registered on the WLEIDS with a Grms value of 3.05. This places the trigger in the “probable” category of impact.

Conversely, the only other WLEIDS trigger during ascent was on starboard RCC panel 20 and contained a registered Grms reading of 1.36.

The event was registered at MET 68.8 seconds – or 1 minute 8.8 seconds after liftoff – and occurred during the Max Q period of flight.

Furthermore, the trigger did not meet all six evaluation criteria. Only four criteria were met: transient, shock, damping, and spectral. WLEDIS data returned “uncertain” information regarding the non-mission and multi-sensor criteria.

However, there are no WELIDS sensors on RCC panels 21 and 22 on both the port and starboard wings, so potential corroborating evidence does not exist since there is no way to gain information outboard of panel 20.

After spending her first day in orbit, Atlantis’ WLEIDS data was once again downloaded and down linked successfully to flight controllers and engineers in Houston. 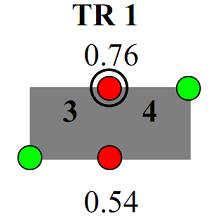 Nonetheless, while there were no impact indications, there was one WLEIDS trigger event at MET 18 hours 16 minutes 00 seconds.

The trigger occurred at the port RCC panels 3 and 4 interface and registered on WLEIDS sensors along the 3/4 RCC panel interface with a Grms value of 0.76, below the “questionable” and “probable” Grms limits for impact potential.

While the indication was low, it did meet five of the six evaluation criteria: transient, non-mission, shock, damping, and spectral.

It did not, however, register across multiple sensors on surrounding panels.

According to the STS-135 Wing Leading Edge Impact Detection System Overview presentation, available for download on L2, a ground team comprised of three divisions will be responsible for evaluating and report WLEIDS data to the appropriate divisions over the course of the mission.

For the On-orbit MMOD monitoring portion of the flight, the Ground Team will be tasked with providing standalone results for any WLEIDS triggers and supporting late-inspection activities.

System management and evaluation will be the primary task of the WIS GFE group during the STS-135 mission, with a focus on commanding, data processing, battery life estimation, and temperatures of the system. 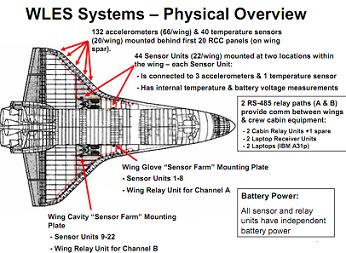 However, none of this would be possible without the numerous hardware elements installed on Atlantis.

In all, 132 accelerometers (66 per wing) and 40 temperature sensors (20 per wing) are mounted behind the first 20 RCC panels on the wing spars of Atlantis.

In turn, 44 sensor units (22 per wing) are located in Atlantis’ wings. Each Sensor Unit, which is designed to gather and process data from accelerometers, has three (3) accelerometers and one temperature sensor attached to it.

Each Sensor Unit contains internal temperature and battery voltage measurements, and the units are grouped together into clusters known as “sensor farms.”

In turn, these Sensor Units will communicate via Radio Frequency (RF) with the Wing Relay Units, of which there are 2 units per wing and one per “sensor farm.” 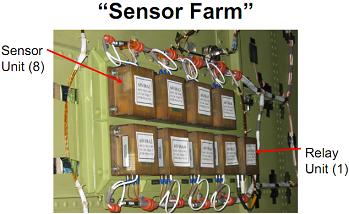 The Wing Relay Units are in turn connected via hardline to the Cabin Relay Units located in middeck cabin locker MA9G.

In all, there are two A31p laptops, one primary and one backup. Only the primary laptop will communicate with the WLES system.

All sensor and relay units have independent battery units; thus, the entire system is not subject to the same power source and can maintain operational status even if one sensor or relay unit’s battery source is depleted prematurely during the mission. 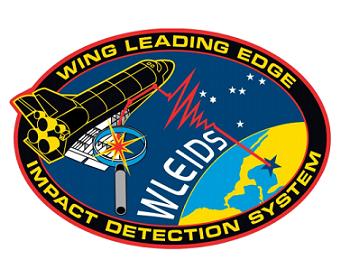 In all, use of the WLEIDS for STS-135/ULF7 began four days before launch when KSC personnel programmed the sensor units with event files. In all, four launch opportunities were programmed into the system with emphasis on Ascent Data Collection and Assessment.

Final verification of battery charges for the system was taken at this time and the system secured in a deactivated mode.

On launch day, the system remained in the deactivated mode until SSME (Space Shuttle Main Engine) ignition at T-6.6 seconds. At this time, Atlantis’ computers triggered the activation of the WLEIDS and all 44 units began collecting 16-bit data at 20,000 samples her second. This continued through MECO (Main Engine Cutoff). 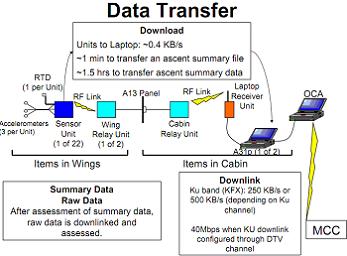 MCC (Mission Control) then commanded the primary A31p laptop to download all WLEIDS information from the Sensor Units at a rate of 0.4 KB/s. It took take about 1 minute to transfer a single ascent summary file and 1.5 hours to transfer ascent summary data.

After this, the raw data was downlinked to the ground for assessment. Downlink was accomplished through the Ku-Band antenna at a rate of 250 KB/s or 500 KB/s depending on the Ku-Band channel utilized.

Following a review of this data, the Mission Evaluation Room (MER) determined if any additional data should be downlinked. Their determination was that not additional data was needed.

Following the WLEIDS sensor units transition to “idle” mode to preserve battery power through their scheduled deactivation on FD-12, the sensor units will be used to monitor Atlantis for MMOD impacts during both free-flight and docked periods.

This will allow for maximization of battery life on the system and, in turn, ensure MMOD monitoring during the highest MMOD risk periods.

A temperature of at least -40-degrees F will be maintained inside each wing structure during the on-orbit operational period of the WLEIDS to ensure proper functionality of the system.

In terms of crew procedures/interaction with the WLES during the flight, there will be three categories of interaction: nominal, off-nominal, and reconfiguration.

For reconfiguration activities, the crew could have to prepare for laptop transfer to a different location within Atlantis.

For crew actions toward the WLEIDS, both Chris Ferguson and Rex Walheim are trained for WLES operations, and Sandy Magnus has received the WLES ops overview class and can help with troubleshooting.

All WLES procedures are contained within the Orbit Ops Book, and nominal crew WLEIDS activities will take ~40 minutes of crew time.

(Images: Via L2 content. Further articles on STS-135 will be produced during and after her mission, driven by L2′s STS-135 Special Section which is following the mission at MMT/MER level, surrounded by a wealth of FRR/PRCB/MER/MMT and SSP documentation/pressentations, videos, images and more.