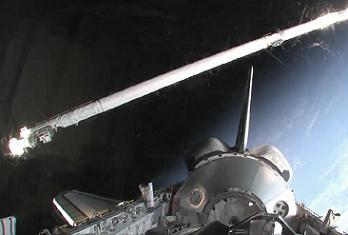 With only two minor “funnies” listed by the Mission Evaluation Room (MER), Atlantis’ excellent performance was matched by her crew on Flight Day 2, as the main event of inspecting parts of her TPS (Thermal Protection System) and OMS (Orbital Maneuvering System) pod surveys, was completed via the use of the OBSS.

Centerline camera installation, along with ODS (Orbiter Docking System) ring extension and Rendezvous tools checkout, were also undertaken, as the crew prepare to arrive at the International Space Station (ISS) on Sunday.

With the NC2 and NC3 Rendezvous burns also part of the flight day, the main role for the crew was the unberthing of the OBSS via the RMS (Remote Manipulator System), in order to carry out surveys of Atlantis’ wing and nose cap, before heading to the OMS Pods to check for any tile damage or protruding blankets.

Regardless, even though there are only four crewmembers for this flight, the tasks proved to be no challenge for the STS-135 team.

Scans of the entire starboard wing were scheduled first, given they are not easily performed, especially if conducted while docked – providing a challenge should a docked late inspection be required. The surveys were pre-scheduled during the night passes, although the crew had the option of electing to pause if the night time visuals are not sufficient. 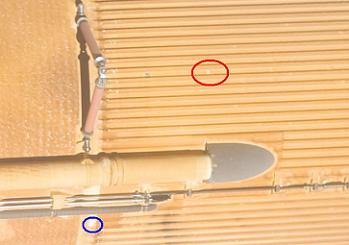 The crew showed no signs of being challenged by the heavy workload, completing the operation in five hours. The imagery is already being evaluated by the Damage Assessment Team (DAT), who have already provided an initial review of photos taken by the crew.

Evaluated first by the DAT engineers was the ascent imagery, ranging from the photographs from the umbilical well of Atlantis, along with handheld photography, of External Tank (ET-138) after it was separated from the orbiter at MECO (Main Engine Cut Off).

Images (L2) show the tank to be in great shape, with no signs of any large Thermal Protection System foam (TPS) liberations, and only two obvious, yet minor, areas of foam loss on the orbiter side of the tank.

One of the main areas of focus – due to the foam work to allow for the installation of radius blocks – was the LO2 flange, which shows no sign of any foam loss. 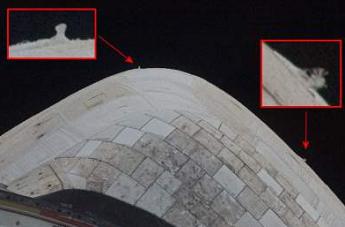 A liberation was noted on the ET camera during ascent – around the point of Solid Rocket Booster (SRB) separation – which the DAT engineers will either match to the tank via the images, or any other potential debris source. There is no concern related to this event.

The DAT have also provided their first overview of the photographs taken by the crew, namely of the OMS Pods, with one Pod showing two areas of frayed insulation. This is not unusual and has been seen before.

Flight Day 3’s RPM (Rbar Pitch Maneuver) – carried out “underneath” the ISS ahead of docking – will provide a near-complete overview of Atlantis’ TPS, which will include more data on the OMS Pod’s areas of interest. 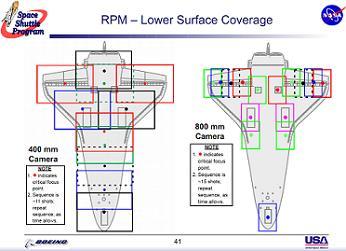 “RPM Photos needed to determine details of the protrusion,” noted the Flight Day 2 DAT presentation to the Mission Management Team (MMT) on L2. “Preliminary thoughts are these may be FI Blanket Patches.”

The RPM will be just one element of a busy day for the crew, which includes the Terminal Initiation (TI) burn – scheduled to occur at 7:31am Central – which provides final course adjustments to the orbiter’s approach to the ISS, placing Atlantis and her crew on the proper heading to reach a point 600-feet “below” the Space Station along the R-bar.

Once on the R-bar, Mission Control, taking into account the need to avoid potential Longeron shadowing on Atlantis, will inform the crew the go ahead to perform the 360-degree RPM – scheduled for 8:54am Central – to allow the flight crew aboard the ISS to conduct a photographic survey of Atlantis’ underbelly TPS tiles.

With this maneuver complete, Atlantis will perform the TORVO maneuver to take the orbiter from the R-bar to the V-bar (Velocity bar) directly in front of the Space Station’s line of travel.

Once properly aligned within the docking cone, Atlantis’ thrusters will be pulsed to reduce the orbiter’s speed by two-tenths of a foot per second effectively slowing the ship and allowing the ISS to “catch up” with the orbiter.

Then, at a much closer range, her thrusters will once again be pulsed to increase the orbiter’s speed by one-tenth of a foot per second, ahead of docking between Atlantis’ ODS and the Space Station’s Pressurized Mating Adaptor 2 (PMA 2), scheduled to occur at 10:06 Central time.

(Images: Via L2 content and NASA TV (OBSS on orbit). Further articles on STS-135 will be produced during and after her mission, driven by L2′s STS-135 Special Section which is following the mission at MMT/MER level, surrounded by a wealth of FRR/PRCB/MER/MMT and SSP documentation/pressentations, videos, images and more.