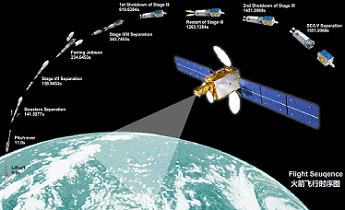 China has launched a domestic communications satellite for Pakistan’s SUPARCO (Space and Upper Atmosphere Research Commission) at 16:15UTC on August 11 from the Xi Chang Satellite Launch Center, in Sichuan Province. The launch of Paksat-1R was conducted by the Long March 3B/E (Chang Zheng-3B/E) launch vehicle.

The satellite will support all conventional and modern Fixed Satellite Service (FSS) applications, with a total of up to 30 transponders: 18 in Ku-band and 12 in C-band. To ensure high degree of reliability/availability of the system, two fully redundant Satellite Ground Control Stations (SGCS) were established in Karachi and Lahore, one to act as the Main and the other as Backup respectively.

Based on versatility, inheritance, expandability and promptness principles and mature technology, the platform will meet the needs of international and domestic large communication satellite markets.

The satellite is equipped with three receiver antennas and two transmission antennas. It can support the transmission of 150-200 TV programs simultaneously to ground users using a 0.45m antenna device.

Developed in the basis of the CZ-3A Chang Zheng-3A, the CZ-3B Chang Zheng-3B is the most powerful launch vehicle on the Chinese space launch fleet.

The CZ-3B features enlarged launch propellant tanks, better computer systems, a larger 4.2 meter diameter payload fairing and the addition of four strap-on boosters in the core stage which provide additional help in the first phase of the launch.

The rocket is capable of launching a 11.200 kg satellite to a low Earth orbit or a 5,100 kg cargo to a geosynchronous transfer orbit. The rocket has a total length of 54.84 meters and a core diameter of 3.35 meters.

After its first failed launch of the February 14, 1996 but ended in failure in what is now known has the “St. Valentine’s Day Massacre”, all the launches of the CZ-3B were successful, except the launch of Palapa-D on August 31st, 2009.

In recent years, the CZ-3B/E (Enhanced Version) launch vehicle was developed on the basis of CZ-3B, increasing the GTO capacity up to 5.500kg. The CZ-3B/E has nearly the same configurations with CZ-3B except its enlarged core stage and boosters. On May 14, 2007, the first flight of CZ-3B/E was performed successfully, accurately sending the NigcomSat-1 into pre-determined orbit.

With the GTO launch capability of 5.500kg, CZ-3B/E is dedicated for launching heavy GEO communications satellite. 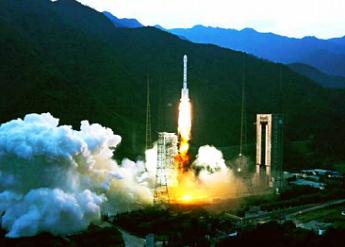 This was the 144th successful Chinese orbital launch, the 142nd launch of a Chang Zheng launch vehicle, the sixth launch from Xi Chang in 2011, and the seventh orbital launch for China in 2011.

Rumors have surfaced relating to launch of TG-1 TianGong-1, noting it may take place at the end of August.

After passing its production certification, Tiangong 1 arrived at the launch site via railway on June 29 to undergo its final testing. The CZ-2F Chang Zheng-2F launch vehicle was delivered on Jiuquan Satellite Launch Center on the morning of July 23.

At the end of the month, China plans to launch the first HY-2 Hai Yang-2 oceanographic satellite from the Taiyuan Satellite Launch Center. Rumours also point for a possible launch of the SJ-11 ShiJian 11-04 satellite from Jiuquan.

Finally, the launch of the Shiyan Weixing-4 and Chuang Xin-3 pair from the Jiuquan has been delayed to September.