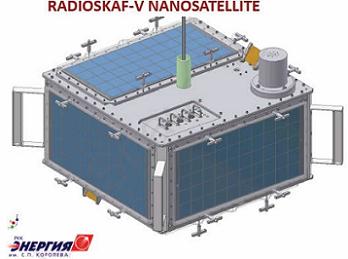 Two Russian cosmonauts have conducted what turned out to be an eventful EVA outside of the International Space Station (ISS) on Wednesday, as part of the ongoing Expedition 28. Going by the designation of RS (Russian Segment) EVA-29 (Extra Vehicular Activity-29), the excursion’s timeline had to be reorganized, resulting in the loss of a major three hour Strela task, now moved to a future EVA.

Once the hatch of the Docking Compartment-1 (DC-1) “Pirs” was opened at 2:50 PM GMT, Volkov and Samokutyaev egressed the station to begin 5 hours and 57 minutes of scheduled tasks.

The first order of business for Volkov and Samokutyaev was to deploy a free-flying satellite. Known by the names of ARISSat-1 and Radioskaf-V, the 57 pound satellite was built using off-the-shelf components by Radio Amateur Satellite Corporation (AMSAT), the NASA Office of Education ISS National Lab Project, the Amateur Radio on ISS (ARISS) working group, and RSC-Energia.

It is designed as a prototype for a series of similar satellites that will carry up to four student experiments and transmit their data back to Earth via amateur radio. ARISSat-1 only carries one student experiment however – an atmospheric pressure sensor built at Kursk University in Russia.

Additionally though, in order to mark the 50th anniversary of Yuri Gagarin’s spaceflight, it will transmit via amateur radio commemorative audio messages in 50 different languages, and still-frame Earth views from four onboard cameras.

Launched to the ISS aboard Progress M-09M/41P on January 28th, ARISSat-1 was originally scheduled for deployment during RS EVA-28 on February 16th, so that it could broadcast the commemorative messages during the 50th anniversary of Yuri Gagarin’s launch on April 12th.

However, analysis showed that if it were deployed on EVA-28, then the satellite’s batteries would have depleted before April 12th, and so the decision was made not to deploy the satellite during EVA-28, but instead to briefly turn the satellite on inside the ISS on April 12th so that it could transmit its commemorative messages. 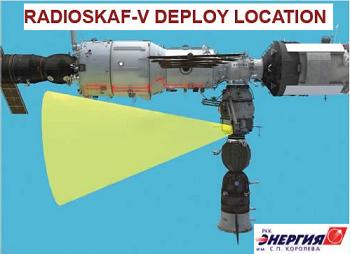 During the EVA, the satellite was manually jettisoned in a retrograde (aft) direction from the ISS, so that it will not pose a debris threat in the future. The satellite will eventually run out of power and burn up in Earth’s atmosphere.

This was supposed to be the first task of the spacewalk. However, after noticing only one – instead of two – antennas on the device, controllers asked to defer the task until later in the EVA to check the configuration.

After confirming one antenna was missing, controllers decided to press ahead and deploy the satellite, which was confirmed at 1:43pm Central time. There will be a 50 percent loss in performance due to the missing antenna.

Prior to this later-than-scheduled deploy, Volkov and Samokutyaev moved on to their second task – the installation of the BTLS-N (Onboard Laser Communications Terminal) monoblock experiment to the portable multipurpose workstation on the Starboard side (plane IV) of the Service Module (SM) Work Compartment (RO) large diameter section. 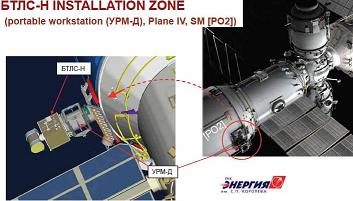 The BLTS-N will test high-speed test laser-based communications between ISS experiments and Earth at speeds of up to one-hundred megabytes per second.

The spacewalkers were also tasked with the removal of the AO-VKA antenna from the SM RO small diameter section. The AO-VKA antenna was used during the Mini Research Module-2 (MRM-2) “Poisk” docking in November 2009, but is no longer needed and so will be brought back inside the ISS.

Also completed by the spacewalkers was the photography of the WAL6 antenna of the Proximity Communications Equipment (PCE) antenna feeder unit on SM RO small diameter section.

The WAL6 antenna has been showing signs of degraded performance, and so the imagery will be used by engineers on the ground to determine the condition of the antenna and potentially determine a root cause. 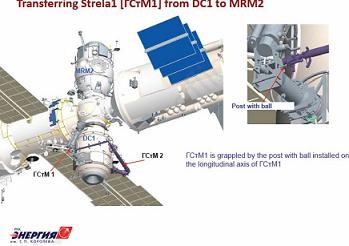 Due to the problems with ARISSat-1’s delayed deployment, the major objective of the EVA – the three-hour relocation of the Strela-1 crane from DC-1 to MRM-2 – was cancelled from the EVA.

The two Strela cranes on the ISS are designed to move large components around outside the Russian Segment of the ISS. Their telescopic boom design allows them to extend, and they can be pointed toward a desired location by an astronaut controlling it from outside the station.

Both Strela cranes have been located on DC-1, with Strela-1 on the Starboard side and Strela-2 on the Port side.

The Strela relocation is required since DC-1 will need to be undocked from the ISS and disposed of in late 2012/early 2013 in order to free up the SM Nadir docking port for the arrival of the Russian Multipurpose Laboratory Module (MLM). 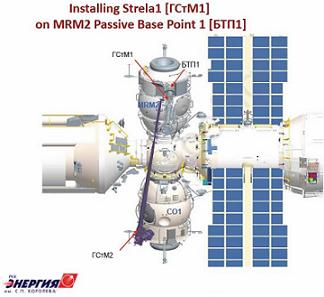 Since the Strela cranes will be useful throughout the lifetime of the ISS, they must find a new home before DC-1 is disposed of.

The task – which will now take place on a later stage EVA – will involve the use of the Strela-2 crane, which will remain at its current location on DC-1 for now. After a special post is installed onto the end of Strela-2 (at a 90 degree angle to the boom), Strela-2 will be pointed at Strela-1, and the post will grapple Strela-1.

Once Strela-1 is detached from DC-1, Strela-2 will maneuver Strela-1 to the Port side of MRM-2 (which is right above Strela-2) using its telescopic ability. Strela-1 will then be installed onto MRM-2 and ungrappled from Strela-2.

With this major task cancelled, Volkov and Samokutyaev briefly returned to DC-1 to retrieve the Biorisk-MSN experiment, which will then be installed onto a handrail outside DC-1. 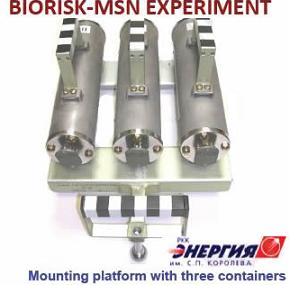 The Biorisk experiment will investigate the effects of bacteria and fungus on materials used in spacecraft construction, and how solar activity may affect the growth of such microbes.

The final tasks of the spacewalk saw Volkov and Samokutyaev photograph the SKK #1 materials exposure container on MRM-2, and the Komplast panel #11 on the Functional Cargo Block (FGB).

Another task carried out was the photography of a set of pictures showing influential Russian space figures Yuri Gagarin, Sergei Korolev, and Konstantin Tsiolkovski floating in the vacuum of space.

Once those tasks had been completed, Volkov and Samokutyaev headed back inside DC-1 to conclude the six hours, 23 minutes EVA, with ingress and hatch closure marked at 9:19 pm GMT (4:19 pm Central). 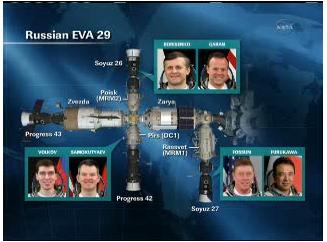 For the duration of the EVA, ISS Commander Andrey Borisenko and Flight Engineer-3 (FE-3) Ron Garan were isolated inside MRM-2, to which their Soyuz TMA-21/26S spacecraft is docked.

FE-6 Mike Fossum and FE-5 Satoshi Furukawa had access to every part of the station that is forward of the SM, since their Soyuz TMA-02M/27S spacecraft is docked at MRM-1, which in turn is located at the FGB Nadir port.

This “lockout” was necessary since all hatches leading to the SM Transfer Compartment (PKhO), to which DC-1, MRM-2 and the FGB are docked, must remain closed so that the PKhO can be used as a back-up airlock in the event that DC-1 cannot be repressurised.

With the Space Shuttle now retired, the tempo of spacewalk activity is expected to decrease markedly, with two or three Russian spacewalks, and only one US spacewalk being conducted annually.

Tasks previously conducted by US spacewalkers will now be conducted robotically by the Special Purpose Dextrous Manipulator (SPDM) “Dextre” – which itself is set to conduct a series of complex tasks in the coming weeks, which will be covered in a future article here on NASASpaceflight.com.

(Images: Via L2 presentations and NASA.gov. As with all recent missions, L2 is providing full exclusive level mission coverage, available no where else on the internet.
(To join L2, click here: http://www.nasaspaceflight.com/l2/)