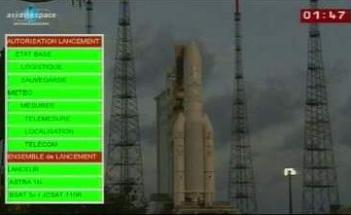 Arianespace took it to the wire during their second attempt to launch two telecommunications satellites via their Ariane 5 ECA launch vehicle on Saturday night, following a weather related delay, prior to launching at 22:52 UTC. The attempt came over a month since a fault with a LH2 valve on the vulcain core stage caused a scrub and rollback of the vehicle. The two passengers – ASTRA 1N and BSAT-3c/JCSAT-110R – launched from the European Spaceport in Kourou, French Guiana.

All was looking good for the latest Arianespace mission until the countdown clock turned red with just under two minutes remaining in the countdown.

Although Arianespace Chairman & CEO Jean-Yves Le Gall initially said it was hoped the problem would be resolved within 15 minutes, he returned to inform the audience in the launch control center that the vehicle wouldn’t be launching within the allocated window.

Mr Le Gall also confirmed the countdown was stopped following an indication that a liquid hydrogen valve had not closed properly in the ground system network leading to Ariane 5’s core cryogenic stage.

After initial troubleshooting did not fully identify the cause of this anomaly, thus a the mission postponement decision was made.

Following evaluations, the vehicle returned to the Assembly Building for repairs, which will result in a delay to the mission by what turned out to be over a month – after it was initally thought the mission would only have to wait another two weeks.

This latest attempt was set to take place on Friday night (August 5). However, poor weather in the region forced managers to delay for a further 24 hours.

The Ariane 5 ECA (Cryogenic Evolution type A) – the most powerful version in the Ariane 5 range – was used for this flight.

Ariane 5 flights will carry the “VA” designation, followed by the flight number.  The “V” is for “vol,” the French word for “flight,” while the “A” represents the use of an Ariane launch vehicle.  As a result, this latest mission will carry the “VA203” reference, for the 203rd launch of an Ariane since this family of vehicles began operations in 1979.

With the introduction of Soyuz at the Spaceport in 2011, Arianespace missions from South America with the medium-lift workhorse launcher will be designated “VS,” while flights with the lightweight Vega vehicle are to be referenced as “VV.” 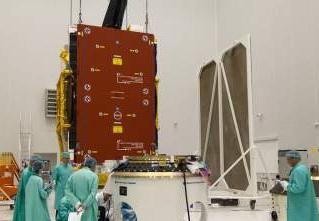 Ariane 5 carried a total estimated payload of 9,095 kg. – including 8,240 kg. for the ASTRA 1N and BSAT-3c/JCSAT-110R satellite passengers. ASTRA 1N is located in the upper position of Ariane 5’s payload “stack” and will be released first during the 38-minute mission.

The ASTRA 1N spacecraft, was built by EADS Astrium in Toulouse, France for the Luxembourg-based operator SES Astra.

Based on Astrium’s Eurostar E3000 platform, ASTRA 1N has an estimated liftoff mass of 5,350 kg. and is fitted with 52 active Ku-band transponders.  It initially is to deliver interim capacity from an orbital position of 28.2 deg. East, and subsequently will move to SES ASTRA’s prime location at 19.2 deg. East for primary and backup services during a designed operational lifetime of 15 years.

BSAT-3c/JCSAT-110R was manufactured by Lockheed Martin Commercial Space Systems at its plant in Newtown, Pennsylvania as part of a turnkey contract for Japanese operators B-SAT Corporation and SKY Perfect JSAT Corporation. 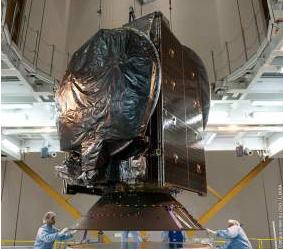 Produced using an A2100 A platform, this satellite will weigh approximately 2,910 kg. at launch, and is to be positioned at 110 deg. East longitude in geostationary orbit, and offers a design life exceeding 16 years. BSAT-3c/JCSAT-110R is fitted with 24 active Ku-band transponders, and is primarily designed to provide direct TV broadcast links for all of Japan.

“We were extremely pleased to collaborate with two valued customers on this program,” said Lockheed Martin Commercial Space Systems president Joseph Rickers. “Once BSAT-3c/JCSAT-110R has been successfully launched and handed over for service, we are confident that both B-SAT and SKY Perfect JSAT will benefit tremendously from the enhanced capabilities that BSAT-3c/JCSAT-110R will bring to their respective fleets.”

The modular design features simplified construction, increased on-orbit reliability and reduced weight and cost. The A2100 design accommodates a large range of communication payloads and serves as the platform for critical government communications programs, including the Advanced Extremely High Frequency and Mobile User Objective System satellites.

Saturday’s mission follows Arianespace’s previous Ariane 5 flights in 2011 that orbited the ST-2 and GSAT-8 telecommunications satellites on May 20; the Yahsat Y1A and Intelsat New Dawn relay spacecraft on April 22; and the Johannes Kepler Automated Transfer Vehicle for servicing of the International Space Station on February 16.