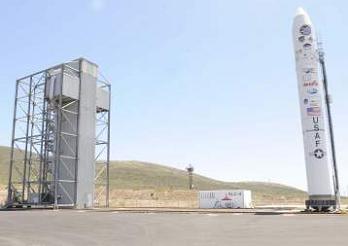 Despite a successful launch, HTV-2a was a failure; contact with the spacecraft was lost nine minutes after launch. An investigation determined that an onboard flight safety system had steered the vehicle into the Pacific Ocean after it had begun to roll erratically. Despite the failure, 139 seconds of data was collected on hypersonic flight at speeds in excess of Mach 17.

Using the data collected by the previous flight, the HTV-2b mission and spacecraft were modified to give a greater chance of success. HTV-2b’s flight profile called for a decreased angle of attack compared to that planned for HTV-2a. In addition, the spacecraft’s mass was redistributed to move its centre of gravity. To improve control, the HTV’s reaction control system was enabled during atmospheric flight, in addition to its flight control surfaces.

HTV-2b flew west from Vandenberg Air Force Base in California, towards Kwajalein Atoll in the Marshall Islands. The flight was expected to last around 30 minutes, from launch to the destruction of the spacecraft upon impacting the Pacific Ocean at the end of its mission.

The HTV-2 flights were made as part of the Force Application and Launch From Continental United States (FALCON) programme, which is being conducted by the US Air Force and DARPA. The programme is intended to collect data which can be used to develop a weapons system capable of reaching any part of the world within an hour of launch.

The Minotaur IV was derived from the Peacekeeper missile, which was developed in the 1970s and early 1980s as part of the Missile-X, or MX, programme. Designed to be resistant to a Soviet first-strike attack, the Peacekeeper was intended for deployment from mobile launchers, or to have been easily moved between silos in order to prevent the Soviet Union locating and targeting US missiles before they could be launched.

By the time development had been completed in 1982, the mobile launcher concept had been abandoned, and in 1983 a decision was made to launch from existing Minuteman silos instead. The Midgetman missile was put into development to provide a mobile capability, and subsequently cancelled in 1992 after the breakup of the Soviet Union ended the Cold War.

The Peacekeeper missile made its successful maiden flight on 18 June 1983; the first of fifty one launches made before the missile was retired in 2004 under the START-II treaty. The last missile was removed from alert in September 2005. In total, 114 missiles were built, and the Minotaur IV is one of several rockets designed to use these surplus components.

Peacekeeper missiles consisted of four stages. The first three stages were solid-fuelled, with the fourth being fuelled by hypergolic liquid propellants. An SR118 motor, produced by Thiokol and also known as a TU-903, made up the first stage, whilst the second stage was an Aerojet-built SR119 motor. The third stage, an SR120 motor, was built by Hercules Incorporated.

The Peacekeeper’s fourth stage, the Postboost Axial Thruster, was fuelled by dinitrogen tetroxide and monomethylhydrazine, which were combined in an RS-34 engine. Each Peacekeeper missile carried up to ten independently-targeted Mk.21 reentry vehicles, each armed with a W87 300-kiloton thermonuclear warhead. 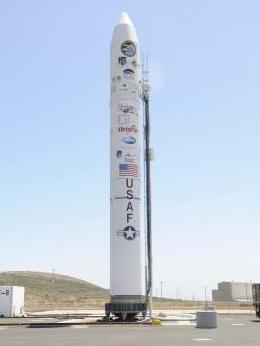 The Minotaur IV first flew last April, and Wednesday’s launch marks its fourth flight. Different configurations are available for different missions; a standard Minotaur IV is a four-stage vehicle, consisting of the first three stages of the Peacekeeper, topped with an Orion-38 solid rocket motor. The Minotaur IV/HAPS configuration, used for the STP-S26 launch last December, is a five-stage rocket, with the same four lower stages, and a Hydrazine Auxiliary Propulsion Stage (HAPS) fifth stage.

The Minotaur IV is one of a series of Minotaur rockets operated by Orbital Sciences Corporation, which includes four other rockets, all derived from retired Intercontinental Ballistic Missiles. The launch of HTV-2b was the twenty second flight of a Minotaur rocket in any configuration.

The Minotaur V is a five stage rocket consisting of a Minotaur IV+ with a Star-37 fifth stage, which will be used to place spacecraft into higher orbits than the Minotaur IV can. Its first flight, scheduled for 2013, will deploy NASA’s LADEE spacecraft on a mission to explore the Moon. 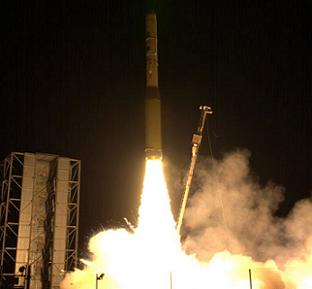 Space Launch Complex 8, from which HTV-2b was launched, was built in the early 1990s as a commercial launch facility for the California Spaceport Authority. Between 2000 and 2006, it supported five Minotaur I launches, but after Minotaur launches from the Mid-Atlantic Regional Spaceport in Virginia began in December 2006, it was not used for four years.

This spell of inactivity ended in April 2010, when the Minotaur IV made its maiden flight from the complex. Two more launches have been made from SLC-8 since; a Minotaur IV launched USA-216; the first Space Based Space Surveillance satellite, last September, and in February this year a Minotaur I launched the USA-225 technology demonstration satellite for the US National Reconnaissance Office from the complex. The launch of HTV-2b is the ninth use of the complex.

Whilst most of HTV-2b’s mission was to be conducted within the atmosphere, the Minotaur IV boosted it into space to gain the velocity needed for its hypersonic flight. At T-0, the first stage ignited, burning for about fifty seven seconds. 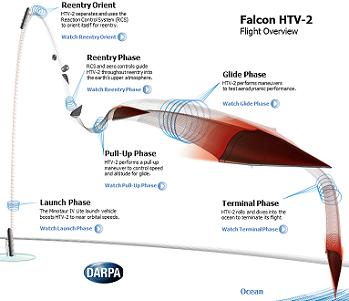 With powered flight complete, HTV-2b separated from the third stage, and reoriented itself for reentry using its reaction control system. The mission plan called for it to reenter the atmosphere, descending steeply before performing a pull-up manoeuvre to increase its altitude in preparation for hypersonic aerodynamics tests.

With the pull-up manoeuvre complete, HTV-2b was expected to begin a long hypersonic glide phase across the Pacific Ocean towards Kwajalein Atoll. A series of aerodynamic manoeuvres were planned in order to record data about the vehicle’s performance at high-mach speeds.

Following the completion of tests, the vehicle was to roll to an inverted orientation and pitch upwards, causing it to descend steeply into the ocean. The HTV-2 spacecraft were not designed to be recovered or reused, and HTV-2b was expected to be destroyed on impact.

If the onboard computer detected an anomaly the spacecraft would be commanded to perform this manoeuvre prematurely, as it did during last year’s HTV-2a mission.

As was the case with this flight, a loss of contact was noted by controllers on the ground, after 139 second of data collection during the glide phase.

“We know how to boost the aircraft to near space,” noted program manager Maj. Chris Schulz. “We know how to insert the aircraft into atmospheric hypersonic flight. We do not yet know how to achieve the desired control during the aerodynamic phase of flight. It’s vexing; I’m confident there is a solution. We have to find it.”

The launch of HTV-2b was the third Minotaur launch of the year, and the first using the Minotaur IV. The next launch for Orbital Sciences and the Minotaur family of rockets is expected to occur late this year, when a Minotaur IV+ will launch TacSat-4 for the Naval Research Laboratory and Operationally Responsive Space Office. The third in a series of technology demonstration satellites, TacSat-4 will be used for tests of a new communications system.