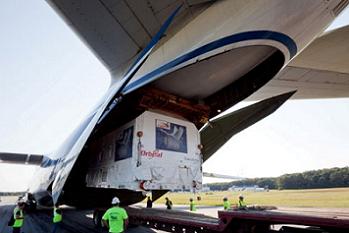 While Russian engineers continue to investigate the failure of their Progress M-12M, which crashed in Eastern Russia on Wednesday, half a world away Orbital welcomed their first pressurized cargo module (PCM) for its Cygnus cargo logistics spacecraft at NASA’s Wallops Flight Facility in Virginia, in preparation for leading the charge of America’s own commercial cargo services.

The failure of the Russian Progress resupply ship highlighted the delicate balance of ensuring the International Space Station (ISS) can support a six person crew during the transition between the loss of the Space Shuttle’s huge capability and the addition of a commercial resupply vehicles which will be launched by Orbital and SpaceX.

Thanks to Atlantis’ STS-135 mission, the ISS is in no risk from a logistics standpoint, but the future of the Station’s full utilization role – not least in the year 2013 – requires the support of both SpaceX’s Dragon and Orbital’s Cygnus making resupply runs to the orbital outpost, an arrangement fostered by NASA’s Commercial Orbital Transportation Services (COTS) contract.

SpaceX are still waiting to hear confirmation that they will be able to accelerate their original demonstration schedule, by way of combining flight 2 and 3 of their Dragon demonstrations, while Orbital’s Cygnus is expected to debut early next year for what will be only one demonstration flight.

A key milestone for Orbital’s drive towards ISS resupply missions was the arrival of the PCM at its Wallops launch site, following a transatlantic flight from its manufacturing location in Italy.

The PCM was unloaded from the Antonov An-124 transport aircraft in its specialized shipping container, prior to being transported to NASA’s H-100 payload processing facility, where it will be uncrated later this week and prepared for integration with Orbital’s spacecraft service module.

Thales Alenia Space will provide Orbital with eight more pressurized modules for cargo missions to the ISS. The first PCM will be followed by three more units in “standard” configuration, capable of transporting up to 2,000 kg of cargo each, along with five “enhanced” configuration units, boosting payload capacity to 2,700 kg. 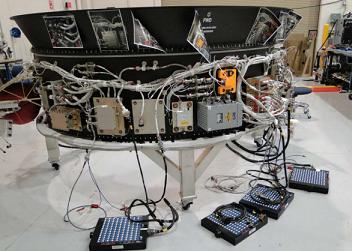 The Cygnus vehicle consists of an advanced service module and a PCM. The service module incorporates avionics, power and propulsion systems from Orbital’s flight-proven LEOStar and GEOStar satellite product lines.

Based on NASA’s requirements, it will deliver crew supplies, scientific experiments and equipment, spares parts and other essential cargo to the ISS.

The Cygnus PCM developed via Thales Alenia Space’s experience with the ISS, as seen with their MPLM (Multi-purpose Logistics Module) which rode numerous times with Shuttle to the orbital outpost – which was built by the company on behalf of the Italian space agency for NASA.

The Italian-based company are also a major player with the ATV (Automated Transfer Vehicle) Cargo Carrier, built for the European Space Agency (ESA). Thales Alenia Space was also a key player in the Columbus laboratory and prime contractor for Node 2, Node 3 and the Cupola – all now on orbit with the ISS.

Together, the PCM and the service module will form the first operational Cygnus that will be launched to the ISS to carry out a demonstration mission, which follows a test flight of the Taurus II launch vehicle at the end of this year. 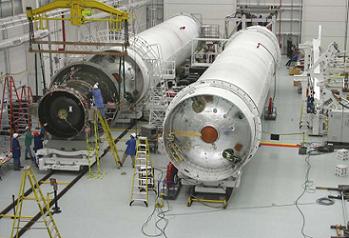 The vehicle sports a 3.9 meter fairing to accommodates large payloads such as the Cygnus, while streamlined vehicle/payload integration and testing via simplified interfaces reduce time from encapsulation to lift-off.

Taurus II is capable of launching single and multiple payloads from the Wallops Flight Facility (WFF), although it is compatible with the Western Range at Vandenberg Air Force Base (VAFB), the Eastern Range at Cape Canaveral Air Force Station (CCAFS) and Kodiak Launch Complex (KLC). 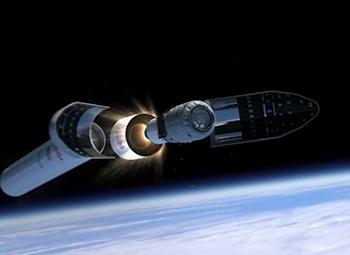 Following the Taurus II test flight and the Cygnus COTS demonstration mission, Orbital will press immediately forward into their Commercial Resupply Services (CRS) contract, with the first CRS flight scheduled to take place in the second quarter of 2012.

“The arrival of the first pressurized cargo module at Wallops is an important milestone for the Cygnus program, signifying that we are making great progress toward carrying out the COTS demonstration mission early next year,” said Mr. Frank DeMauro, Orbital’s Cygnus Program Manager.

“With the first fully-assembled service module currently in testing at our Dulles, Virginia satellite design and production facilities, it won’t be too long before both of the major elements are united at Wallops for final system integration, followed by integration with the Taurus II rocket that will launch Cygnus to the International Space Station.” 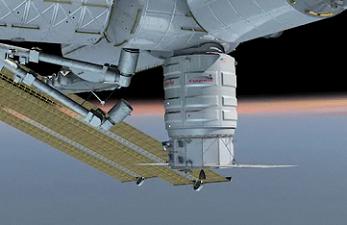 “This is one more important step in our partnership with U.S. private industry to build safe, reliable and cost effective cargo transportation systems,” said Philip McAlister, acting director of commercial spaceflight development at NASA Headquarters in  Washington. “We are pleased that Orbital has made this accomplishment and look forward to the company flying the Cygnus spacecraft in 2012.”

The debut CRS runs by Dragon and Cygnus will provide the United States with an ability to custom design payloads required by the ISS, as full utilization takes hold on orbit.

It will also mark the first tangible step towards the US regaining its domestic human space flight capability, with several manned vehicles currently being designed via the Commercial Crew Development (CCDev) contracts, prior to a NASA decision on which vehicles it will buy services from to launch its astronauts to the ISS.

(Images: Orbital) (As the shuttle fleet retire, NSF and L2 are providing full transition level coverage, available no where else on the internet, from Orion and SLS to ISS and COTS/CRS/CCDEV, to European and Russian vehicles.