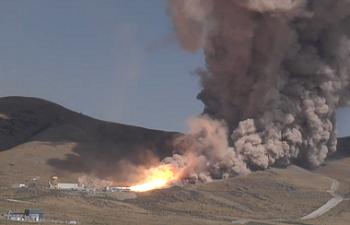 NASA and Alliant Techsystems Inc. (ATK) have conducted a full-scale test of a five-segment solid rocket motor – designated Development Motor-3 (DM-3) – at their test facility in Promontory, on Thursday. The configuration is being tested ahead of a potential role with the Space Launch System (SLS), which would utilize two of the boosters during the opening two minutes of flight.

The DM-3 motor was the third in a series of development motors to be tested and the most heavily instrumented solid rocket motor in NASA history, with a total of 37 test objectives measured through more than 970 instruments.

The previous test – DM-2 – was carried out with a total of 53 design objectives, measured through more than 760 instruments.

For that test, the motor was cooled to 40 degrees F – a ‘cold motor’ test – in order to measure solid rocket motor performance at low temperature, as well as to verify design requirements of new materials in the motor joints.

The DM-3 incorporated several performance-based improvements to the designs of the first two development motors. Additionally, the core of DM-3 was heated to 90 degrees Fahrenheit for this full-duration firing to verify the motor’s performance at high temperatures.

ATK have noted that initial test data indicates the motor performed as designed, producing approximately 3.6 million pounds of thrust, or 22 million horsepower, and burning for just over two minutes.

“This milestone is another step towards completing our Critical Design Technical Interchange activity this fall.” 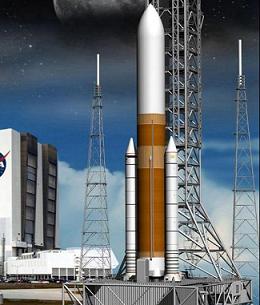 With this test, NASA and ATK can specifically assess performance at the highest end of the motor’s accepted temperature range. Through development testing, the solid rocket motor will be certified to fly at ambient temperatures ranging from 40 to 90 degrees Fahrenheit.

A major test objectives from the firing related to verifying the performance of new materials in the motor joints at hot temperatures. Intentional flaws were introduced in the joint to allow hot gas to penetrate into part of the robust joint to verify joint performance.

“The data from these tests, along with information we have collected over the past three decades, confirms this is the most powerful solid rocket motor ever designed,” said Precourt.

“This performance makes the five-segment a great solution for heavy lift launch vehicles.”

DM-3 is the largest human-rated solid rocket motor in the world, measuring 12 feet in diameter and 154 feet in length. The five-segment motor is based on the Space Shuttle’s four-segment boosters, but it has been upgraded to incorporate modern technologies and materials that were not used on the shuttle booster.

As a result it produces 30 percent more power than the four-segment motor while utilizing new materials that provide cost and weight savings. 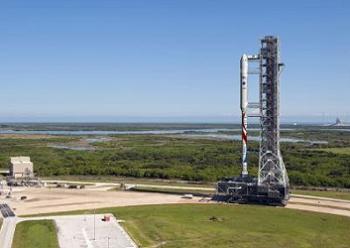 Two vehicles may use the booster, after it was initially designed for use with the since-cancelled Ares I – as the first stage, and Ares V launch vehicle – which would have used two of the larger Solid Rocket Boosters (SRBs).

One vehicle ATK have angled the motor towards is an Ares I-type commercial vehicle known as Liberty, which was first proposed as part of NASA’s Commercial Crew Development-2 (CCDev-2) procurement.

Despite losing out on the CCDev down-selection, ATK appear to be continuing work with European aerospace group EADS unit Astrium, who would provide the liquid-fueled cryogenic core of the Ariane 5 vehicle, powered by the Vulcain2 engine, as the Upper Stage.

The most likely role for the five segment booster will be with the Space Launch System (SLS), which is a Shuttle Derived (SD) Heavy Lift Launch Vehicle (HLV). 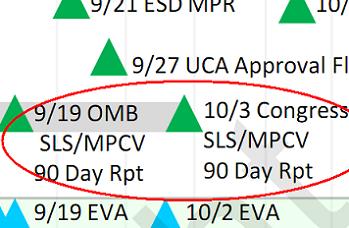 With L2 documentation showing the final version of the 90 day report – which has been delayed numerous times since the start of the year – heading to the OMB on September 19, prior to heading to Congress on October 3, full details about the vehicle’s cost and schedule should be made public soon.

Costing documentation – cited as the source of recent “dramatic” reports, such as seen in the Wall Street Journal (citing an August 19 document) – have now been acquired by this site (L2) and will be fully overviewed in an upcoming article.

As far as ATK’s role in SLS, documentation (L2) shows the Utah-based company have proposed a Firm Fixed Price (FFP) contract for 10 boosters, available between 2012-2015, whilst noting available assets that can support up to 11 SLS missions prior to asset depletion in 2020.

ATK are proposing the initial use of boosters in their expendable mode, thus eliminating several hundred million dollars worth of recovery and refurbishment costs. 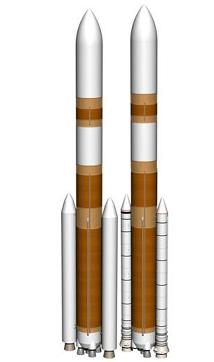 As it stands, SLS would debut with the five segment boosters, prior to a trade study to evaluate if a switch to a liquid booster would be the best route forward, as SLS begins to ramp up towards its fully evolved configuration.

Such a switch – according to preliminary schedules – would be implemented by SLS-5, although such a decision could be made later in the schedule.

For the fully evolved 130mt SLS vehicle, source notes claim a future static DM test could be provided by ATK as a pathfinder test for an upgraded booster, which would be in competition with the liquid counterpart.

Such an upgraded booster may include recently proposed change to a HTPB (Hydroxyl-terminated polybutadiene) fueled solid in “composite over wrapped steel cases” thus allowing higher MEOP (Maximum Expected Operating Pressure) – to as much as 1500 psi.

As previously reported, there are also proposals to use lighter weight nozzles with expansion ratios up to 12:1, although such a large scale change would require study at least at a Ground Support Equipment (GSE) level, given its relation to Launch Platform design.

Currently, documentation shows SLS is being associated with the unemployed Ares Mobile Launcher (ML), while upgrades to the existing Crawler Transporters – along with lifetime extensions – are being evaluated at the Kennedy Space Center (KSC).

Another SLS article will follow on progression towards approving the use of the orbiter Main Propulsion System (MPS) hardware – donated by the shuttle fleet – in the opening SLS vehicles, following a positive review at the latest Program Requirements Control Board (PRCB) meeting.

(Images: Via ATK Webcast and L2 content – driven by L2′s new SLS specific L2 section, which includes, presentations, videos, graphics and internal updates on the SLS and HLV available no where else on the internet).