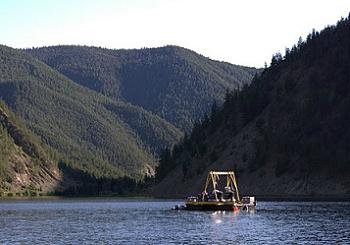 NASA’s Mission Operations Directorate (MOD) are continuing to expand their involvement in exploration training and simulation by working with the international Pavilion Lake Research Project (PLRP) team on multi-hour missions – a precursor to deep space exploration missions, which will one day involve humans searching for signs of life on Mars.

PLRP – which began in 2008 – is a NASA and Canadian Space Agency (CSA) analog research program, which is ramping up its work in 2011 via the addition of new scientific, operational and technological objectives to its busy ten-day field deployment.

The Project is unique in focusing on both science and scientific operations research in the underwater environment of Kelly Lake, British Columbia, Canada. The PLRP team use DeepWorker submersible vehicles to explore, study and document rare freshwater carbonate rock formations that thrive in this lake, which in turn provides mission training opportunities for future deep space exploration.

The team are working on conducting safe, productive and discovery-based science in extreme environments. It is this knowledge that will form the basis of future exploration concepts for human research voyages to such destinations as near-Earth asteroids (NEAs) and Mars.

This training not only allows for gaining experience in conducting the science, but also utilizing it to ask one of the most important questions which exploration is being tasked with – the potential finding of proof there was once life on Mars.

“The Pavilion Lake Research Project (PLRP) is a NASA and CSA sponsored international, multidisciplinary, science and exploration effort to explain the origin of freshwater microbial in BC, Canada,” noted the August MOD presentation (available on L2). “Data trends provides information to identify signatures of ancient life on our own and other planets (for example Mars).” 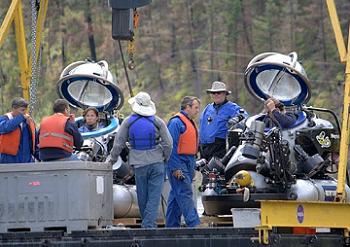 The 60 strong team will be deeply involved in seven days of tasks, all tied into the upcoming October work to be conducted by the NASA Extreme Environment Mission Operations (NEEMO) mission, along with the ongoing work being carried out by NASA’s Desert Research and Technology Studies (RATS) – both of which also now have MOD involvement.

“Single person submarines, scuba divers and other watercraft are used in around five hour exploration missions over seven days. Real time voice and video transmitted to science backroom team, CAPCOM, Flight Director and planning team in MCC (Mission Control Center),” added the presentation, showing where the MOD involvement will be, which includes a mobile, onsite, MCC. 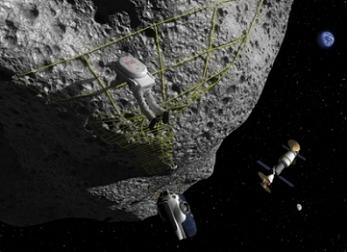 The overview of MOD’s involvement in the PLRP mission is even mapped out in the order of PTF. 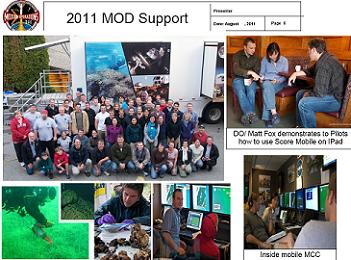 With the PLRP team launching new tools – such as the Exploration Ground Data Systems developed at NASA’s Ames Research Center – the teams will be able to rapidly synthesize, manage and analyze large data sets, as well as plan and manage flight scheduling.

These tools also will be used to manage the “delayed communications” research that will build 50-second communication delays between the submarine pilot and the mission operations crew to simulate what it is like conducting science on asteroids with human explorers. 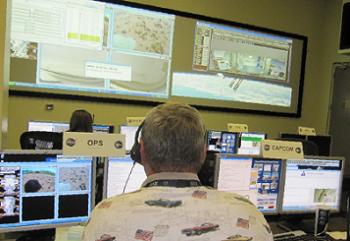 This “delayed comm” element is being utilized in MOD’s involvement with NEEMO and the Desert Rats.

MOD and PLRP will also use the new planning tools to better manage a dynamic and complex operations schedule, as well as gain a new degree of situational awareness about all field camp activities, with MOD sharing their expertise and experience gained from supporting mission operations for the space shuttle and International Space Station.

“Pushed the limits of current ISS tools in an exploration based environment. Developed prototype of timeline viewer tool (Score Mobile) for exploration missions. Kelly Lake 2011 field season used as test bed for other analogs,” added the MOD overview on their own benefits from being involved in the PLRP mission.

“Feeds into Next Gen viewer (NGPS). Demonstrated ability to provide operational services to a customer using the MOD model of Plan, Train, Fly. Grew knowledge base in order to provide better products and services to our future customers.

MOD also note that future work may include collaboration to incorporate a ‘Field Astronaut’ training concept for an ISS science experiment (ISTAR collaboration).

This year’s PLRP field team also includes a member from Google, who will help the team evolve its use of mapping activities and develop cutting-edge data integration platforms based on Google Earth.

NASA information added that in addition to achieving its science and technology goals, this year’s field test also will provide local teachers an opportunity to learn how a lake in their community will be used to train astronauts and scientists and prepare them for space exploration.

As previously summarized in the NEEMO overview, the first deep space exploration mission is likely to be to an asteroid, with the end goal set up for a crewed mission to Mars.

With the well-known uncertainty surrounding the long-term goals of the space program, no definitive mission planning has been created for a Mars mission. However, the post-Augustine Commission “Flexible Path” overviews did show what remains the only expansive review into a Mars mission outline of late. 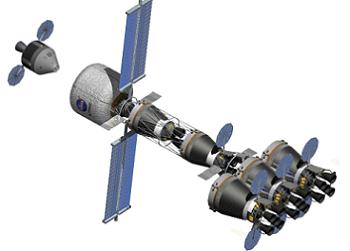 Per the internal Flexible Path presentation – available on L2, and summarized in several articles – numerous HLVs (Heavy Lift Launch Vehicles – such as the Space Launch System) would launch the elements of the Mars Transport Vehicle (MTV) for assembly in Low Earth Orbit (LEO) – of which there are several notional designs, all modular in appearance.

As overviewed in the presentation, a crew would undertake a mission of up to 650 days, with the opening target likely to be the Mars moon, Phobos.

“A human Mars Orbit/Phobos Mission represents an intermediate step between human exploration missions in near-Earth space and human missions to explore the surface of Mars,” opened the expansive section on the manned missions to Mars/Phobos.

“Key features could include demonstration of in-space hardware elements designed for Mars missions while accomplishing scientific and exploration objectives both at Mars and on Phobos.” 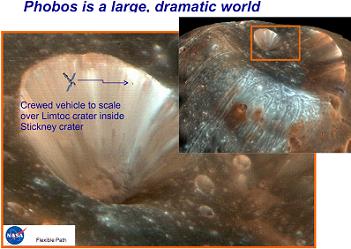 The reason Phobos is the likely first target of a Mars mission shows relevance to the science collection efforts being simulated by the missions taking place this year on Earth.

“The mystery of the origin of Phobos can be resolved, and its evolution since formation can be investigated by field geologists on site in contact with a larger team back on Earth. As a possible D-type (organics-rich with possible interior ice) asteroid, it offers science beyond what is readily available in the NEO population, and can shed light on the objects that delivered the initial inventory of water and organics to the surfaces of Earth and Mars,” the presentation continued.

“Returned samples would contain a record frozen very early in the formation of the solar system. The work would benefit significantly from a conjunction-class mission (540 days vs. 40 days at the target), since Phobos is a large and diverse body. 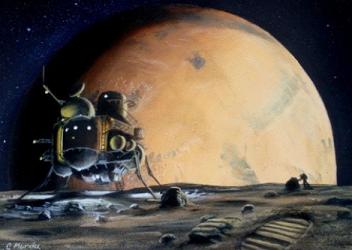 “Phobos has been a collector of ejected Martian surface material for billions of years. That material is a record of the history of early Mars that may not even be preserved on Mars itself due to weathering. Martian material should be readily recognizable by color for collection. These samples would be an important supplement to samples collected directly from the surface of Mars.

Challenges with communication from such a distant target are also cited, something which MOD will be gaining experience from via the NEEMO, Desert Rats and PLRP mission simulations.

Incidentally, the mission example used by the Flexible Path approach involves a fly-by of Venus on the return leg – and the closest humans have ever been to the Sun – along with possible flybys of several asteroids.

Regardless, such a mission becoming a reality remains many years away, with a huge amount of work and advances in human space flight required, even if the funding becomes available, likely resulting in such a mission being in the 2030s.