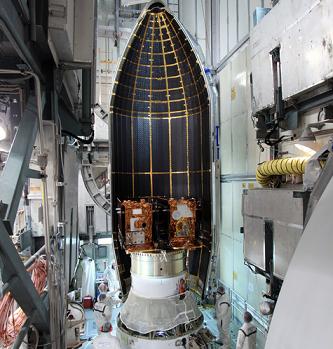 With less than one week to go before the launch of the twin GRAIL lunar satellites from the Cape Canaveral Air Force Station, FL, NASA has completed the pre-launch flight readiness reviews for both GRAIL and the veteran Delta II rocket which will propel the spacecrafts into their cruise to Earth’s only natural satellite.

The final two weeks of the GRAIL (Gravity Recovery and Interior Laboratory) satellites’ processing for launch proceeded without major issue as the final Flight Readiness Reviews for the satellites and the Delta II launch vehicle paved the way for launch on Thursday, September 8 at 08:37.06 EDT or 09:16.12 EDT.

Over the last two weeks, the pad processing teams at Pad-B of Space Launch Complex 17 (SLC-17) at the Cape Canaveral Air Force Station, FL, dodged the weather to get the veteran Delta II rocket processed for its historic final launch from Florida – processing that included protecting against the possible effects of Hurricane Irene as the storm system passed off the Florida coast.

According to a GRAIL processing status report dated August 22, “Due to the close approach of Hurricane Irene and the need to protect the S/C from the elements, the team has accelerated a portion of the LV processing schedule.”

Ordnance installations and electrical connections to the GRAIL-A and GRAIL-B spacecrafts were completed by mid-day August 23, per status reports available on L2.

The actuator had been returning “out-of-family” readings since early August, and the decision was made to replace the actuator to preclude it from interfering with a successful launch.

The replacement actuator arrived at the Cape on Wednesday, the same day payload fairing installation was completed.

With the replacement actuator at the Cape, plans were immediately created to replace the component before the potential work-stoppage due to the approach of Hurricane Irene.

In the end, Hurricane Irene ultimately posed no threat to the Cape and work proceeded on schedule while the storm passed 180 nautical miles off shore. 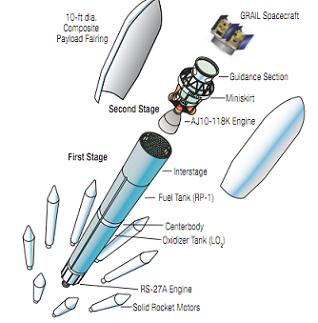 In addition to the hydraulic system testing on Aug. 27, the pad teams also commenced with testing on the replaced Main Engine Yaw Actuator.

Additional Ordnance installations took place on Monday, August 29, as did continued hydraulic system checks which were delayed from the weekend due to lightning warnings at the launch pad.

Also on Monday, August 20th, a suspect solenoid valve leak was detected and a replacement valve ordered “in the event removal and replacement is required.”

But the biggest event on Monday, Aug. 29 was the ULA systems review, a standard pre-launch countdown review to identify any constraints remaining against the rocket and its launch systems. The review identified two constraints to second stage propellant loading, both of which were expected to be closed by the August 31 Launch Vehicle Flight Readiness Review by NASA.

Final Solid Rocket Motor walksdown were completed on Tuesday, August 30 with no issues noted with the boosters. Tuesday also saw the installation of the Main Engine blanket at the base of the Delta II.

Moreover, additional testing on the suspect solenoid valve led to the decision to R&R (remove and replace) the valve.

R&R of the solenoid valve took place on Wednesday, August 31, resulting in nominal readings from the replacement valve after the R&R was complete.

Launch countdown health checks on the GRAIL satellites were completed on Wednesday with positive results, as were spacecraft functional tests. 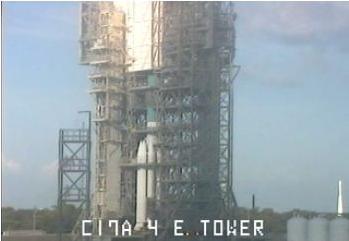 However, the biggest event on Wednesday was the tremendous success of the team in addressing and closing the open items that were listed as constraints to second stage propellant loading.

By Thursday, September 1, the Launch Management Coordination Meeting had been held and a Mission Dress Rehearsal was completed.

According to an official GRAIL mission processing report from Thursday, September 1, “During the launch countdown simulation, the team exercised lines of communication, readiness polling, and anomaly resolution processes.  The GRAIL team effectively demonstrated readiness for launch on September 8.”

By Friday, September 2, the Delta II rocket’s second stage was fueled, and the spacecraft processing team was prepared to stand down for the United States Labor Day holiday weekend and resume launch preparations on Tuesday, September 6.

(As the shuttle fleet retire, NSF and L2 are providing full transition level coverage, available no where else on the internet. Click here: http://www.nasaspaceflight.com/l2/ – to view how you can support NASASpaceflight.com)