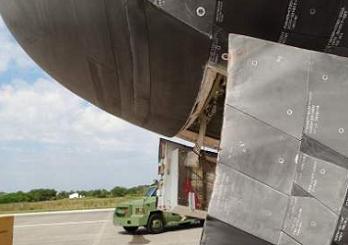 With the Space Shuttle Program now officially a part of NASA’s past, the agency is continuing the process of getting Discovery, Atlantis, and Endeavour ready for their display at museums around the United States. However, following STS-135, NASA did conduct one official post-flight review – an investigation into RCC nose cap/chin strap damage to orbiter Atlantis on STS-135.

As part of the standard landing-day procedures, a quick assessment of orbiter Atlantis’s Thermal Protection System (TPS) was made after her successful return to the Kennedy Space Center after the 12-day capstone mission for the Space Shuttle Program.

During this runway TPS inspection, an unexpected damage site was found on Atlantis’s nose cap RCC (Reinforced Carbon-Carbon) panel where it adjoins the RCC chin strap.

As noted by the MOD (Mission Operations Directorate) presentation – available for download on L2 – “OV-104’s Nose Cap expansion seal on the R/H side was noted to have SiC damage during evaluation on the runway post landing.”

Furthermore, “Carbon fibers were exposed and visible with a 7x hand lens. x30 – x100 magnification did not reveal oxidation of the carbon fibers.”

The presentation specifically notes that the damage to STS-135/Atlantis was completely unrelated to the identified root cause of the RCC spallation issue studied for the fleet’s Wing Leading Edge RCC panel joggle regions a few year ago. 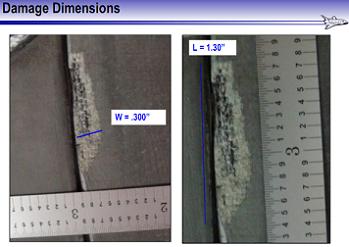 Specifically, this SiC damage was of the same variety as noted on a previous flight of Atlantis – her STS-115 mission in September 2006 which marked her return to active duty following the resumption of Space Shuttle missions in July 2005.

Post-flight analysis and damage assessment for STS-135 indicates that the SiC coating did not liberate during flight but after Atlantis had touched down on runway 15.

While the liberated SiC coating could not be found on the runway and recovered for analysis, there was “no evidence of visible oxidation to the black carbon substrate” – evidence that supports a post-landing SiC liberation event.

The post-landing damage site was not in an area of the TPS that had been previously repaired, and all pre-flight Infrared Thermography images revealed no subsurface damages or flaws to the region during Atlantis’ OPF (Orbiter Processing Facility) flow toward STS-135. 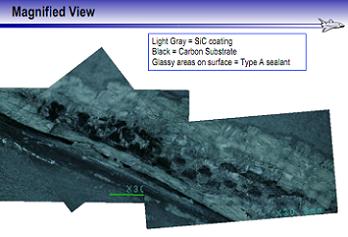 In fact, the presentation notes that “Previous thermography of the area revealed ‘no blistering or anything that would have brought about a visual inspection.'”

Thus, it is believed that the damage was “due to mechanical loading induced by a minimum gap condition.”

The post-flight measurements ranged from 0.010 inches to 0.020 inches.

Additionally, during post-flight gap measurements, “a piece of the seal easily liberated when accidently touched with a scale during gap measurement.”

The Leading Edge Structure Subsystem (LESS) Principal Review Team (PRT) found that the expansion seals in the nose-cap-to-chin-strap region likely shifted at some point in Atlantis’s processing after the initial measurements were taken or shifted during flight. 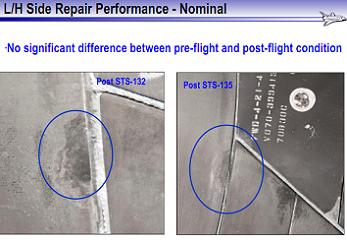 A review of Atlantis vehicle processing for this chin panel and RCC nose cap area showed documented work to remove and then re-install the chin strap during Atlantis’s OPF flow toward STS-132 – her penultimate flight.

During reentry on July 21, 2011, the chin panel to nose cap gap likely closed up due to RCC expansion from thermal effects, resulting in contact at this localized area that initiated a stress riser and caused a SiC coating crack.

Then, late in the reentry process, the “Type A sealant” likely started to solidify and fused the nose cap and chin panel together. At landing, the “heat soak” reached the STR and opened up the chin panel and nose cap gap. 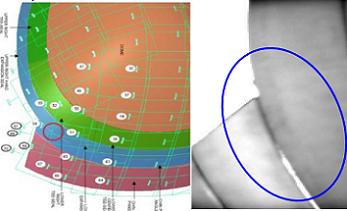 When this happened, the “Type A sealant pulled the SiC chip away from the nose cap expansion seal causing the event.”

Therefore, the team concluded that the damage was the result of a minimum gap condition that existed between Atlantis’s nose cap RCC and chin strap RCC, and that the damage was “unrelated to the infamous WLE RCC Root cause spallation failure mode observed at the joggle region.”

The recommendation was then made to close the investigation with no change to the root cause team’s recommendations or SSP’s accepted risk.

The damage is not a concern or constraint for Atlantis’s display activities or “previous RCC root cause risk acceptance.”

The option does exist, however, to further study this issue for three to five years via current SSP funding.