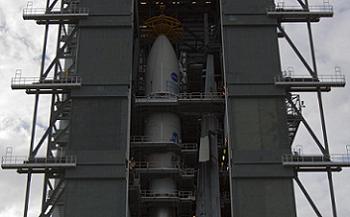 Set to return NASA on course to Mars, the Mars Science Laboratory, known colloquially as the Curiosity rover, stands ready with its Atlas V rocket for a Thanksgiving holiday weekend launch from from the Cape Canaveral Air Force Station. Following a one day slip, the Atlas V is set to launch within a 103 minute window which opens on Saturday at 10:02 a.m EST.  The initial pad flow: Getting Curiosity atop the Atlas V rocket:

The mission will mark the first NASA undertaking to Mars in over four years and the last chance for the world’s space fairing nations to successfully launch a probe to the red planet during the current planetary alignment window which ends in December.

Following the completion of the buildup of the core stages of the veteran Atlas V rocket, the Mars Science Laboratory (MSL) rover Curiosity was moved to Launch Complex 41 (LC 41) at the Cape Canaveral Air Force Station on November 3, 2011.

Arriving at the pad at 4:35 AM, the MSL was hoisted up to the top of the Atlas V rocket where it was soft mated to the Centaur Forward Adapter for bolt installation.

As noted by the November 3 processing update, available for download on L2, “the subsequent weight offload operations were interrupted due to an unexpected crane load cell reading and observed slack in hoist cables.”

The issue occurred approximately 30 seconds into the load transfer, and a team was immediately convened to determine the cause of the issue.

Since the spacecraft itself was not in the load path, United Launch Alliance (ULA) and NASA quickly determined that it was safe to proceed with the mating and securing of the spacecraft atop the Atlas V rocket.

By the following morning, mating of the MSL payload fairing to the top of the Atlas V was complete, and the pad teams had powered up the spacecraft for interleaved telemetry testing.

Integrated Systems Testing between the Atlas V rocket and the MSL spacecraft also commenced on the morning of November 4, as did the R&R (Removal & Replacement) of the video transmitter for the Centaur forward facing camera.

By Saturday, November 5, Integrated Systems Testing was complete with nominal operations detected throughout the test.

The Integrated Systems Test also served to confirm the functionality of the two forward facing cameras on the Atlas V booster and the Centaur upper stage.  Before this test, however, it was determined that the aft facing booster camera, which was noted to have failed during an October 13 Wet Dress Rehearsal, would not be replaced prior to the launch of the mission – and will therefore not be available on launch day. 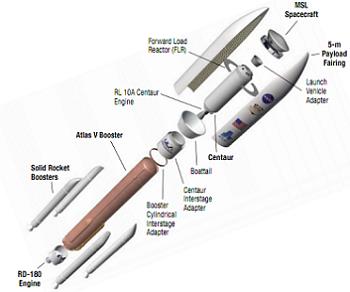 By the following day, “The walk-down of the AV-028 was completed … as planned by ULA and NASA. Preliminary findings and noted discrepancies will be coordinated and processed with Atlas Cape Operations beginning Monday morning,” noted the Sunday, November 6 processing update.

A successful Baseline Test of the flight systems on November 8 then preceded the very important MSL Mission Readiness Briefing (MRB).

At the MSL MRB, “the project presented an overview of compliance with the Level 1 requirements, overall risk, open work, and team readiness.”

While there were still “a few open items” at the time of this review, all parties were in agreement that all was in place to “proceed with operations toward launch” – a recommendation that was carried forward to the agency (NASA) the following day.

With that recommendation, NASA accepted the recommendation on Nov. 10 to proceed with launch operations for Curiosity and its Atlas V rocket.

Power for Curiosity: MSL gets its nuclear power generator:

By Veterans Day in the United States (November 11), the launch processing teams had completed the build-up of cleanroom enclosures at the pad, and the Payload Fairing doors had been removed for Spacecraft access and Freon removal operations. 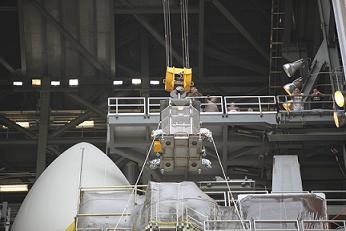 By November 14, the MMRTG mass model simulator had been removed from Curiosity in preparation for the installation of the real Multi-Mission Radioisotope
Thermoelectric Generator (MMRTG): Curiosity’s nuclear power generator – the sole source of power for the solar panel-less rover.

Working on the same principles as 28 previous U.S. space missions, Curiosity’s MMRTG will generate electrical power for the rover through the conversation of heat released from the nuclear decay of radioactive isotopes into electricity.

Notable NASA missions to use RTGs include the Apollo 12-17 missions, Vikings 1 and 2, Pioneers 10 and 11, Voyager 1 and Voyager 2, Ulysses, Galileo, Cassini, and New Horizons.

On November 15, a dress rehearsal for the installation of the MMRTG was executed at LC-41 with a “qual unit” taking the place of the actual MMRTG.

The rehearsal was a complete success, and the “qual unit” was “de-integrated” from the MSL on Nov. 16. 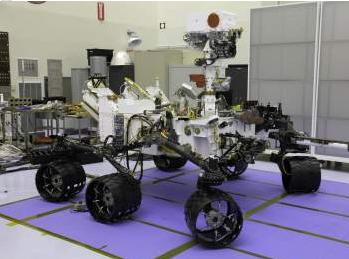 By late in the day on Nov. 16, control teams had met for the final time to review contingency procedures should something go wrong with the installation of the nuclear power source for Curiosity.

“The JPL, LSP, and ULA teams also met again today to scrub through the pre-coordinated responses for potential loss of cooling scenarios.  The anomaly responses, expected actions, and conditions that would require decisions from the contingency operations board were also reviewed and deemed acceptable by the team,” notes the Nov. 16 pre-launch processing status update.

However, the weather was also being monitored closely for the MMRTG installation operation.

“The team will be monitoring the weather conditions closely for Thursday’s ops, including an update prior to commencing transport and operations,” noted the processing update.

“The Planning Forecast, provided by the 45th, indicates a cold front advancing from the west overnight, and entering Central Florida by early afternoon.  Chances of precip likely to increase from the early AM hours to the early afternoon.  However, no significant issues have been identified for commencing Thursday’s ops.” 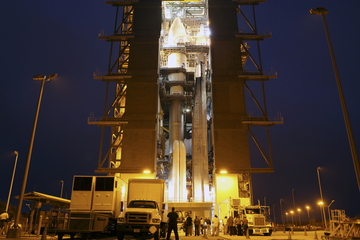 On Thursday (November 17), transfer of the MMRTG to LC-41 began on time and proceeded without issue, less a short weather delay due a Phase II lightning warning.

When the storm that triggered the warning failed to develop, the warning was lifted and operations at the pad continued.

“The MMRTG was hoisted and inspected by the team. The unit was then installed on the RIC (installation cart).  Cooling lines were connected and checked with no leaks observed.”

By Friday, November 18, the MMRTG integration to MSL was continuing on pace with electrical mates complete.

Simultaneous to the installation of the MMRTG was a review of all communications, telemetry, video, voice systems, mission operations, and facilities. No issues were identified, and a decision was made to proceed to the Flight Readiness Review (FRR). 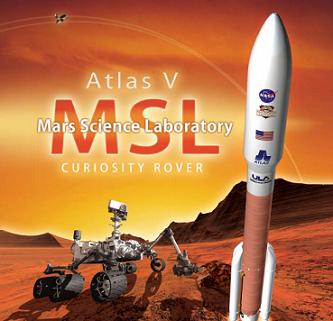 With all these procedures complete/in progress, the final Flight Readiness Review was held at the Kennedy Space Center on Nov. 18.

“All organizations polled (45th Space Wing, ULA, and NASA) provided concurrence for readiness to proceed with processing towards the planned 11/25/2011 launch date.”

Nonetheless, shortly after this approval was received, a battery on the Atlas V rocket’s Flight Termination System (FTS) was found to be suspect and was removed.

At the time, “The plan and schedule for battery replacement, system testing and final preparations for launch [was] being developed and [would] be ready for review tomorrow.  The current ILC [remained] 25 November 2011. The short term schedule for activities [remained] in place.”

However, by Saturday the 19th, it was clear that the battery issue would not be resolved in time to make the Friday, November 25 launch.

“Regarding the FTS battery, and as reported earlier this afternoon by NLM (NASA Launch Manager), the suspect battery was removed and is in Denver for inspection and failure analysis. The new battery is in the process of being activated, with both installation and re-test of the FTS [are] planned for completion on Tuesday.”

Due to a desire not to work the ground crews on the upcoming Thanksgiving holiday, the decision was made to postpone the launch of MSL one day, thus giving crews the time needed to install and test the new battery, complete roll preps for the Atlas V rocket, spend the holiday with their families, and then roll to the pad for launch.

Final roll preps for the transfer of the Atlas V rocket from the Vertical Integration Facility to the launch pad will take place on Wednesday, with Thursday being a non-work day due to the Thanksgiving holiday.

The Atlas V rocket, in the 541 configuration (a 5.4-meter Payload Fairing, 4 strap-on Solid Rocket Motors, and a single-engine Centaur upper stage) will then roll to the pad on Friday, November 25 for a 1002 EST targeted liftoff on Saturday, November 26.

(Images: NASA, ULA, L2, Alan Waters) (NSF and L2 are providing full transition level coverage, available no where else on the internet, from Orion and SLS to ISS and COTS/CRS/CCDEV, to European and Russian vehicles.)