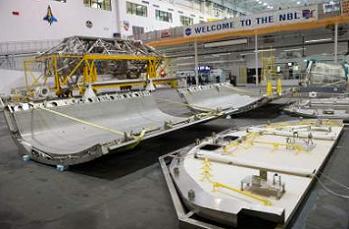 An agreement has been signed between Raytheon Technical Services and Petrofac Training Services to allow oil workers to train at the Neutral Buoyancy Laboratory’s giant pool. While training scenes for fictional oil workers were seen during the movie Armageddon, Petrofac’s team won’t be preparing to save the planet, instead using the facility to fine tune their survival protocols.

The 202-foot-long, 102-foot-wide pool at the center of the NBL was designed to support spacewalk planning and training using full-scale mockups of the space shuttle and a large area of the International Space Station (ISS).

While the 6.2 million-gallon, 40-foot-deep pool will continue to support NASA’s activities, a transparent 12-foot faux floor will be installed in designated areas to support survival training.

Work on clearing space in the NBL has already taken place, with large sections of the full scale orbiter payload bay since removed from the pool, with photographs (L2) showing the doors, orbiter airlock, orbiter docking mechanism and other elements of hardware laid down next to the pool and in a car lot.

The mockup of the International Space Station will remain in place, allowing for NASA astronauts to continue to train on the modules and structures, for what is likely to be the majority of this decade.

Per the agreement, astronauts and oil field workers will share the NBL, located at the Sonny Carter Training Facility at NASA’s Johnson Space Center (JSC) in Houston, taking advantage of excess capacity at the agency’s underwater training pool.

“In 2010, NASA selected the Raytheon team to manage and operate the facility under the NBL/Space Vehicle Mockup Operations Contract. NASA allowed Raytheon to use the facility when it is not being used for agency activities,” noted a release on the agreement.

“The partnership will efficiently use NBL resources while combining the expertise and capability of Raytheon and Petrofac to create a center of excellence for survival training.” 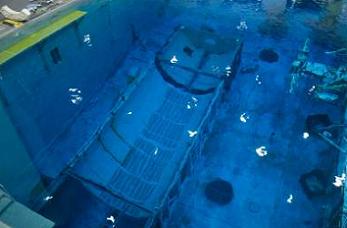 Raytheon Technical Services – NASA’s contractor for operations at the NBL – signed the agreement with Petrofac to use the NBL to provide survival training for offshore oil and gas workers. The NBL will provide trainees with one of the most realistic environments available to learn critical aspects of water survival.

“The Raytheon team has managed operations at the facility since 2003. The partnership initially will focus on three core survival courses applicable to the worldwide oil and gas industry,” added the release. “Oil field worker survival training is expected to begin in December.”

The core courses are helicopter underwater egress training; basic offshore safety induction and emergency training; and further offshore emergency training. The partnership also will expand into the delivery of emergency response and crisis management training for oil, gas and other industry sectors by using the NBL’s on-site test control rooms. 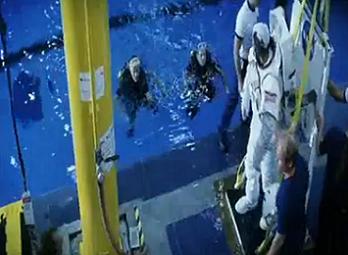 The prospect of oil workers training alongside NASA astronauts in the NBL is a serious one, as much as some of the public will be reminded of the fictional NBL training scenes in the Hollywood blockbuster “Armageddon” – where actors Bruce Willis, Ben Affleck and others played the role of fictional oil workers on an astronaut training crash course, in preparation to save the planet from a rock “the size of Texas”.

The movie was filmed at several real NASA center locations, including the NBL itself, as referenced by one of the companies – Hydroflex – who were involved in filming the underwater scenes in the pool.

“NASA set stringent requirements on any outside equipment being used at their facilities. Hydroflex’s camera and lighting gear had to pass a hazard analysis before they could be brought into the tank. The HydroFlex 35-3 Deep Water Housing and SeaPar 1200W HMIs passed NASA’s risk assessment with full clearance for use in the NBL.” 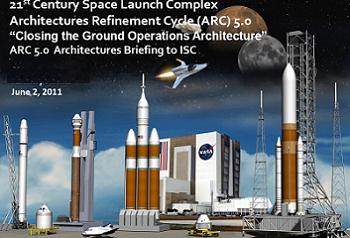 The agreement is also a sign of JSC’s changing role, following the Space Shuttle fleet’s retirement from NASA operations. Similar to the Kennedy Space Center (KSC) – and its recent agreements with commercial companies – JSC’s world class facilities are of great interest throughout the space flight industry and beyond, with opportunities available in utilizing facilities which are now under less specific demand from NASA operations.

“The announcement highlights NASA’s efforts to find new and innovative partnerships. By opening Johnson Space Center’s facilities and resources for use by non-aerospace industries, NASA hopes to find areas of common interest where both parties can help each other foster new technologies that not only improve life here on Earth, but also pave the way for future human exploration in space.

“The NBL is just one facility with the potential for use by outside industries with special needs for design, development, testing, operations or training, especially in extreme environments.”

(Images: L2, NASA, Touchstone Pictures) (NSF and L2 are providing full future level coverage, available no where else on the internet, from Orion and SLS to ISS and COTS/CRS/CCDEV, to European and Russian vehicles.)