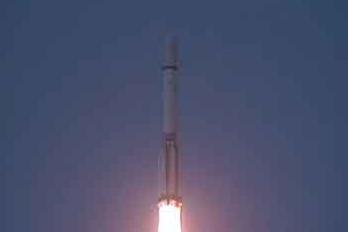 A Russian government Proton-M launch vehicle has successfully launched with three Glonass-M – the Russian Global Positioning System (GPS) – satellites on Friday. Launch was on schedule at 12:52 GMT from the Baikonur Cosmodrome in Kazakhstan, as the Russian fleet of vehicles continue their fight back from recent failures.

Glonass is the Russian version to the US Global Positioning System (GPS), which several nations are building for the purpose of independence from the American-controlled system.

The three satellites are numbers 43, 44, and 45 – following on from the recent launch of the number 42 Kosmos satellite – a Blok-45S design – which was successfully launched via a Soyuz 2-1B launch vehicle from the Plesetsk Cosmodrome in northern Russia.

The latest trio of satellites were individually delivered to Baikonur over a period of a few weeks, starting with number 43 in late September.

The launch was then delayed several times from its original October 30 target, with the latest – a one day delay – relating to an unspecified technical issue. However, lift off on Friday was successful, ahead of what was four planned burns of the Breeze-M upper stage, prior to the release of the new trio around 18:41 GMT.

It was a problem with that upper stage which resulted in the loss of the Ekspress-AM4 communications satellite in August – another Russian government mission – when the stage, otherwise known as the Briz-M, failed to insert the satellite into the correct transfer orbit due to a problem with the last of the mission profile burns.

This failure led to a delay for the ViaSat-1 mission, which was initially scheduled for September, prior to its successful launch – conducted by International Launch Services – on October 19.

With this week’s successful launch and docking of the Progress M13M/45P via the Russian Soyuz launch vehicle, paving the way for the next crewed Soyuz TMA launch later this month, the Russian fleet are closing in on a full return to nominal operations.