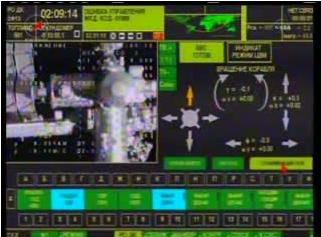 The Russian Soyuz TMA-02M spacecraft, also going by its US designation of 27S, has undocked from the International Space Station (ISS) and returned to Earth on Tuesday morning, carrying three members of the outgoing Expedition 29 crew. As the second of the new “digital” Soyuz TMA-M variants, a special attitude control test was performed post-undocking.

Launched to the ISS on 7th June, with a docking to the Mini Research Module-1 (MRM-1) on 9th June, the crew of Soyuz TMA-02M were the second to fly on the new digital Soyuz, and the last Soyuz crew to fly in the Space Shuttle era. Thus, when the crew of Soyuz TMA-02M return to Earth, they will become the last ever people to have flown inside a Space Shuttle during their current space mission.

Soyuz TMA-02M was originally scheduled to return to Earth on 16th November, but that date was pushed back to the 22nd November in order to allow for an unusually short six day handover with the crew of Soyuz TMA-22/28S, which docked to the ISS on 16th November.

The crews of Soyuz TMA-02M and Soyuz TMA-22 were originally scheduled to fly in space together for around two months, however since the launch of Soyuz TMA-22 was delayed from late September to 14th November due to August’s Progress M-12M launch failure, the short handover period became necessary.

It was not possible to delay the landing of Soyuz TMA-22 past the 22nd due to adverse weather and lighting conditions at the Kazakhstan landing site. Therefore, in order to aid in the handover, the crew of Soyuz TMA-02M have made a series of videos explaining the current status of the ISS to the Soyuz TMA-22 crew.

While the docking of Soyuz TMA-22 to MRM-2 last Wednesday temporarily increased the ISS to six crewmembers, tonight’s Soyuz TMA-02M undocking from MRM-1 again reduced the ISS back down to three crewmembers for around a month.

Following ISS maneuver to the undocking attitude, which saw the underside of the ISS to which Soyuz TMA-02M was docked positioned to face the negative side of the Velocity Vector, Soyuz TMA-02M undocked from MRM-1 at 11:00 PM GMT.

Following the undocking, Soyuz TMA-02M conducted stationkeeping with the ISS at 50m in order to perform a unique test of the Soyuz’ RODK (Manual Attitude Control by Digital Mode) at 11:05 PM GMT.

This test was necessary since Soyuz TMA-02M is only the second in the new “digital” TMA-M series of Soyuzes.

The test was very similar to the one preformed during the Soyuz TMA-01M/24S undocking back on 16th March, although that test included both RODK and ROAK (Manual Attitude Control by Analogue Mode), and used ammeters to measure current on the Neptun-ME control panel due to a failed display.

Soyuz TMA-02M, however, only tested the RODK, but also tested in response to the performance anomaly of DPO-B rendezvous & docking thruster #14 observed during the descent of Soyuz TMA-01M in March.

Soyuz TMA-01M thruster 14 experienced a thrust underperformance of 40-60% of nominal value during descent, but according to NASA, it “had no impact on the nominal descent which uses the SKD main engine. Updates were now introduced in the control system for the event of an SKD failure during the execution of the de-orbit burn”. 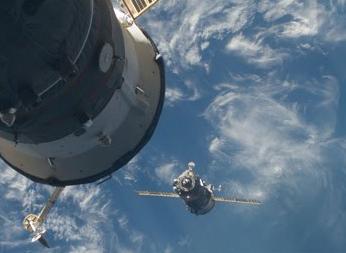 Following completion of the RODK test, a separation burn was performed, and roughly two and a half hours later, Soyuz TMA-02M conducted the four minute de-orbit burn at 1:32 AM GMT Tuesday morning.

Tri-module separation between the BO, SA and Instrumentation/Propulsion Module (PAO) will occurred at 1:59 AM GMT, followed by entry interface at 2:02 AM GMT. Eight minutes later, parachutes deployed at 2:10 AM GMT, followed fifteen minutes later by touchdown at 2:25 AM GMT in Kazakhstan, location 51 degrees North, 67 degrees 10 minutes East.

Following crew extraction from the descent module, they were flown to a nearby airfield by helicopter, whereupon the Soyuz TMA-02M crew will part ways for the first time in nearly six months, with Sergey Volkov boarding an aircraft back to Star City in Moscow, and Mike Fossum & Satoshi Furukawa boarding a “direct return” aircraft back to Ellington Field in Houston, with Mike Fossum arriving back at his Houston home roughly 24 hours after landing, in time for Thanksgiving with his family.

With the undocking of Soyuz TMA-02M, Expedition 29 will end and Expedition 30 will begin, with American astronaut Dan Burbank in command of the ISS following the change of command ceremony between Fossum and Burbank that occurred yesterday. 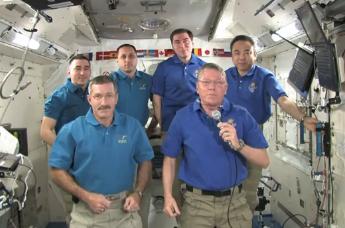 The three-person Expedition 30 crew, consisting of Burbank and Russian cosmonauts Anton Shkaplerov & Anatoly Ivanishin, will continue the station’s rigorous program of scientific utilization until they are joined on 23rd December by the Soyuz TMA-03M crew, consisting of American astronaut Don Pettit, European astronaut André Kuipers, and Russian cosmonaut Oleg Kononenko, who will launch from Kazakhstan on 21st December.

The arrival of Soyuz TMA-03M, at the MRM-1 port to be vacated tonight by Soyuz TMA-02M, will place the ISS back at six crewmembers and bring an end to the disruptions caused by August’s Progress M-12M crash, as much as last week’s successful Soyuz TMA-22 docking has ended concerns of a de-crewing of the station.

(Images: NASA – more images will be added during the events of crew return) (NSF and L2 are providing full future level coverage, available no where else on the internet, from Orion and SLS to ISS and COTS/CRS/CCDEV, to European and Russian vehicles.)