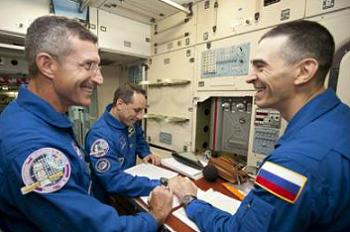 Russia’s Soyuz TMA-22 spacecraft has successfully docked to the International Space Station (ISS) after a two day free flight following a flawless launch from the Baikonur Cosmodrome in Kazakhstan on Monday. The arrival of Soyuz TMA-22 with three crewmembers has averted a possible de-crewing of the station following the failure of a Soyuz booster in August.

Soyuz TMA-22, also going by its American designation of 28S, docked to the Zenith port of the Russian Mini Research Module-2 (MRM-2) “Poisk”, vacated exactly two months ago (16th September) by Soyuz TMA-21/26S. Soyuz TMA-22 is expected to remain docked to MRM-2 for exactly four months, whereupon it will undock and land on 16th March 2012.

The total number of Russian vehicles docked at the ISS now stands at three – Soyuz TMA-22/28S at MRM-2 Zenith, Soyuz TMA-02M/27S at MRM-1 “Rassvet” Nadir, and Progress M-13M/45P at Docking Compartment-1 (DC-1) “Pirs” Nadir. Soyuz TMA-22 is the last ever “analogue” Soyuz TMA variant to dock at the ISS, as all future Soyuzes will be “digital” TMA-M variants, which include modernised electronics and greater cargo carrying capacity.

The successful arrival of the three Soyuz TMA-22 crewmembers, American astronaut Dan Burbank, and Russian cosmonauts Anton Shkaplerov and Anatoly Ivanishin – who are the first people to arrive at the ISS since the crew of the final Space Shuttle mission in July – eliminates concerns about a possible de-crewing of the ISS in light of the August failure of the Progress M-12M/44P cargo vessel, which sent the spacecraft crashing to the ground after a total loss of thrust of its booster rocket.

The failure, caused by a blocked fuel line leading to the gas generator of the Soyuz-U booster’s third stage RD-0110 engine, caused a suspension of all crewed spaceflights due to the similar third stage in use on the crewed Soyuz-FG booster.

This caused concerns that a new crew would not be able to launch to the ISS before the current crew had to return home – a date limited by landing site darkness/weather concerns, and the roughly 200 day orbital lifetime of the Soyuz spacecraft. 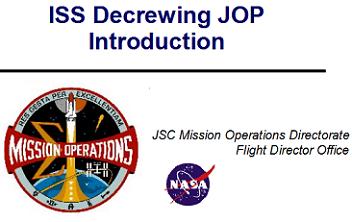 While NASA managers set about devising contingency procedures to operate the ISS in an unscrewed configuration – a risky proposition at best – a Russian commission attributed the blocked fuel line that caused the August launch failure to a one-off human error in vehicle processing.

Additional procedures were put in place to ensure the problem did not re-occur, such as extra inspections, re-testing, and improved worker oversight.

The successful launch of the Progress M-13M/45P spacecraft atop the Soyuz-U booster on 30th August confirmed that the defect was a one-off, which cleared the way for the resumption of crewed launches of the Soyuz-FG booster.

The successful docking means that new crewmembers have arrived at the ISS before the outgoing crewmembers’ departure, thus laying ISS de-crew concerns to rest.

Those crewmembers – American astronaut Mike Fossum, Japanese astronaut Satoshi Furukawa, and Russian cosmonaut Sergei Volkov, will undock from MRM-1 in their Soyuz TMA-02M/27S spacecraft and land in wintry Kazakhstan on 22nd November. This means that the newly arrived Soyuz TMA-22 crewmembers will have only six days to perform a handover with the outgoing Soyuz TMA-02M crewmembers – a highly unusual situation since handovers usually last around two weeks.

As such, the outgoing crewmembers have pre-recorded numerous video tutorials for the new crewmembers in order to shorten the amount of physical handover that will need to be accomplished. 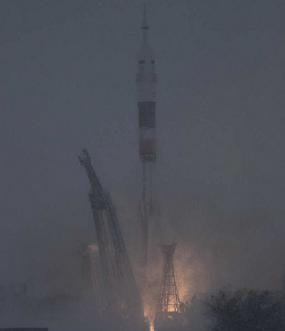 The short handover period is due to the fact that the Soyuz TMA-22 launch was delayed from late September to 14th November by the August Progress launch failure. The Soyuz TMA-02M undocking and landing was also delayed from its originally planned date of 16th November to 22nd November in order to allow for the longest handover possible.

It is not possible to delay the Soyuz TMA-02M landing any further due to adverse weather and lighting conditions at the Kazakhstan landing site that will be present after the 22nd.

Following the undocking of Soyuz TMA-02M, Expedition 29 will come to an end, and Expedition 30 will officially begin with US astronaut Dan Burbank of the US Coast Guard in command.

Expedition 30 will fly with three crewmembers until the arrival of Soyuz TMA-03M on 23rd December with US astronaut Don Pettit, European astronaut André Kuipers, and Russian cosmonaut Oleg Kononenko. That will put the US crew rotation schedule back on track for the first time since the August Progress launch failure.

The major goal of the Expedition 30 increment is to perform the research that the ISS was designed for now that station construction is completed.

A minimum of 35 crew hours per week will be devoted to science activities – although some weeks could move into the 40s once six crewmembers are restored. The de-crew preparations (mostly jumper reconfigurations) that were made to the ISS by the Expedition 29 crew will also be undone – much to the delight of ISS flight controllers.

A number of cargo craft will arrive and depart the ISS during Expedition 30, including the departure of Progress M-13M/45P from DC-1 Nadir on 25th January, and the arrival of Progress M-14M/46P at the same port three days later on 28th January. 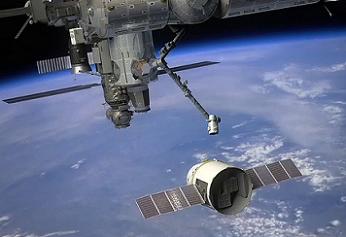 Although marking the end of an era by not getting to fly inside a Space Shuttle due to its retirement in July, the Expedition 30 crew will usher in a new era by being the first humans to fly inside a commercial spacecraft when SpaceX’s Dragon spacecraft arrives at the ISS, currently likely to be sometime in February.

The Expedition 30 crew will be responsible for reaching out the station’s welcoming Canadarm2 to shake hands with a commercial spacecraft for the first time in history, signifying a new partnership that will see commercial companies take over the cargo delivery role previously fulfilled by the Space Shuttle.

Expedition 30 will also see a Russian spacewalk performed by Kononenko and Shkaplerov on 14th February. Expedition 30 will end on 16th March with the undocking and landing of Soyuz TMA-22 with Burbank, Shkaplerov and Ivanishin after an unusually short four month mission due to their two month launch delay.

(Images: NASA, Roscosmos, L2) (NSF and L2 are providing full future level coverage, available no where else on the internet, from Orion and SLS to ISS and COTS/CRS/CCDEV, to European and Russian vehicles.)