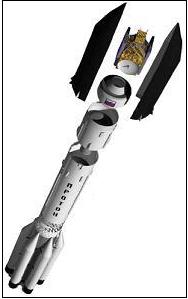 A Russian government Proton-M launch vehicle has successfully launched with two satellites – Russia’s Luch-5A and Israel’s AMOS-5 – on Sunday. Launch was nominal and on schedule at 11:17 GMT from the Baikonur Cosmodrome in Kazakhstan, ahead of a long flight profile which involved four burns of the Briz-M (Breeze-M) Upper Stage.

The Russian Luch 5A satellite has a mass of 2.4 metric tons, featuring two photovoltaic arrays, which provide 1.8 kW of power. Three large antennas and numerous small helical antennas enable data relays in the 15/14, 15/11, and 0.9/0.7 GHz bands.

Five satellites have been built on the heritage of this platform (KAUR-4), but only four were launched, namely Kosmos 1700, Kosmos 1897, Kosmos 2054 and Luch-1 – none of which are currently operational. The second generation platform included several improvements. Only one satellite in this range was launched – Luch-2 1 – which is also no longer operational.

Israel’s AMOS-5 satellite is aimed at Africa’s emerging satellite services market, taking position at the new 17 Degrees East location. Once in orbit, the AMOS-5 satellite will feature a fixed pan-African C-band beam and three steerable Ku-band beams – all covering Africa with connectivity to Europe and the Middle East and supporting multiple transponders in both C-band and Ku-band.

Together with the AMOS-2 and the AMOS-3 satellites co-located at Spacecom’s 4 Degrees W orbital “hot spot,” the AMOS-5 satellite will give the company’s customers coverage over many of the world’s fastest growing and highest-demand satellite markets in the Middle East, Central and Eastern Europe, Central Asia and Africa.

With an expected lifetime of 15 years, AMOS-5 sports 18 Ku-band and 18 C-band transponders, providing a variety of coverage, including Direct-To-Home TV broadcasting services.

It was a problem with that upper stage which resulted in the loss of the Ekspress-AM4 communications satellite in August, when the stage, otherwise known as the Briz-M, failed to insert the satellite into the correct transfer orbit due to a problem with the last of the mission profile burns.

This failure led to a delay for the ViaSat-1 mission, which was initially scheduled for September, prior to its successful launch – conducted by International Launch Services – on October 19.

(Images via Tsenki and Roscosmos).