Taurus II changes name to the Antares ahead of debut launch 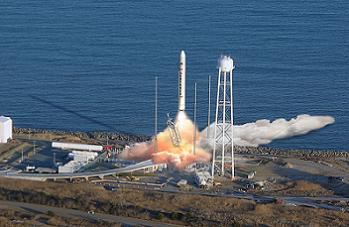 Orbital Sciences Corporation’s new launch vehicle – currently being developed as a simple solution to continue to support the medium class satellite market, as well as to loft much-needed cargo to the International Space Station via the company’s Cygnus spacecraft – has changed its name from Taurus II to the Antares.

In announcing the change for the permanent operational name for the medium-class launch vehicle created by its research and development program formerly known as Taurus II, Orbital noted they felt the new launch vehicle deserved a name of its own, as opposed to carrying on the Taurus call sign.

Orbital selected the name in keeping with the company’s tradition of using Greek-derived celestial names for launch vehicles. Antares is one of the brightest stars in the sky. Classified as a “supergiant” star, it is located in the constellation Scorpius and has a red hue when observed by the naked eye.

Antares was also the name for the Apollo 14 lunar module.

“We are transitioning to the Antares identity primarily because a launch vehicle of this scale and significance deserves its own name, just like Orbital’s Pegasus, Taurus and Minotaur rocket programs that have come before it,” said Mr. David W. Thompson, Orbital’s President and Chief Executive Officer.

The Antares program currently has a backlog of 10 launches, beginning in early 2012 with a test launch followed by a second demonstration mission later in the year, both conducted under the Commercial Orbital Transportation Services (COTS) agreement with NASA.

In addition to its work with NASA on the COTS and CRS programs, Orbital is also offering Antares to civil government, military and intelligence, and commercial customers for dedicated launch services for medium-class satellites.

“The successful introduction of the Antares launcher, with its contribution to our COTS and CRS programs along with future sales to other customers, is a linchpin of the company’s long-term growth and profitability strategy,” added Mr Thompson.

The Antares is the first cryogenically powered launch vehicle produced by Orbital Sciences, as well as its largest to date. Unlike competitor SpaceX’s philosophy of internal design and production of components, Orbital decided to use experienced contractors for major elements of the launch vehicle. 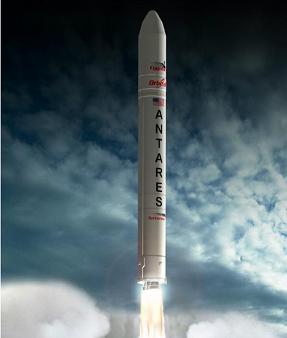 The main engine for the first stage of the Antares is the Aerojet produced AJ-26. The engines are rebuilt version of Soviet NK-33, originally intended for the massive N-1 launch vehicle. Aerojet later bought the engines which had never been used and added modern electronics and other performance enhancements.

The engines were slated for use on the since-defunct Kistler K-1 launch vehicle, but were then chosen for Antares after the Kistler COTS agreement fell apart.

Orbital Sciences originally conceived of a core with a single NK-33 derived engine combined with strap-on solid boosters. However a second engine was ultimately added to the core and the boosters were removed from the final design.

Orbital originally intended at this point to switch to a liquid upper stage called the HESS utilizing the Russian RD-0124. However, the company later decided to go with a stretch of the original upper stage called the Castor 30XL.  The Castor 30XL will power the last six flights scheduled right now for the Antares, and will launch extra cargo on a larger Cygnus Spacecraft.

Antares will utilize a three digit designation based on the combination of staged utilized. The first digit will always be a one and refer to the kerosene core. The second stage will be labeled 1 for the Castor 30A, 2 for B, and 3 for XL. The last digit refers to the upper stage being utilized, with a 1 being the designation for the HAPS stage and 2 for the Star 48 and 0 for no upper stage. 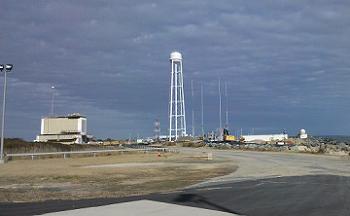 The most radical difference of Antares from existing large domestic launch vehicles will not be the technical feature of the launch vehicle, but rather the location from which it will be launched.  Orbital Sciences decided to launch the vehicle from the Wallops Island annex of NASA’s Goddard Space Flight Center, which is located in the Commonwealth of Virginia.

Antares will be the first cryogenically powered launch vehicle to fly from Wallops as well as the largest.

In preparation for the debut launch, Wallops is receiving an extensive makeover. Pad 0A was completely demolished and rebuilt as a clean pad equipped with kerosene and liquid oxygen tanks and associated plumbing.

A new Horizontal Integration Facility has also been built to handle the processing of multiple Launch vehicles, and the Launch Control Center is receiving an upgrade.

Antares is currently scheduled for ten flights. The first flight will be a demo flight using the 110 version currently targeted for the February/March 2012 timeframe. The COTS Demonstration flight also utilizing a 110 version, currently  expected to launch around May/June 2012.

The first Commercial resupply Services mission is expected – as much as dates are continually changing – around late August/early September and the second in late November/early December with both missions using the 120 version of the Antares.