ESA and Arianespace closing in on Vega’s debut launch 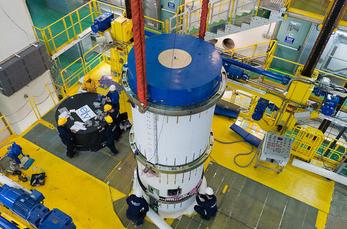 A new launch vehicle will be born in the coming weeks, as the small orbital launch vehicle “Vega” prepares for its long awaiting launch from the Guiana Space Centre in Kourou, French Guiana. Vega will complete Arianespace’s family of three launch vehicles, following the successful debut of Soyuz in Kourou last year and the continued success of Ariane 5.

Vega will compliment her two big sisters at the European Spaceport by providing a target payload lift capability of 1,500 kg on missions to a 700-km circular orbit – payloads which would either be uneconomical riding on Soyuz or Ariane, or which require the dedicated flexibility that Vega can provide.

Arianespace’s fleet all have specific roles, with Ariane 5 optimized for large satellites on missions to a Geostationary Transfer Orbit (GTO), and Low Earth Orbits (LEO) for payloads of large mass. Soyuz is tailored for medium mass payloads for LEO and certain smaller GTO spacecraft.

Arianespace started work on the vehicle back in 2003 – as much as the origins of the concept range back to the 1990s – with ELV SpA (Italy) the lead manufacturer. The debut launch was originally targeting 2007, as the upper stage passed vibration testing in Holland, ahead of the Critical Design Review (CDR). This date continued to slip year on year.

The second and third stages – designated Zefiro 23 and Zefiro 9, respectively – also use solid propellant motors, while the launcher is topped off by the bi-propellant liquid upper stage (called AVUM – Attitude and Vernier Upper Module). Test firings of these motors took place between 2008 and 2009.

With launch pad ELA-1 successfully prepared for launch and the final Flight Readiness Review (FRR) providing a green light to proceed towards the 2012 flight, the vehicle which will carrying out the debut launch – known as a demonstration mission – completed integration of its three solid stages and the liquid AVUM fourth stage in Kourou.

This marked the start of the launch campaign, as the Arianespace teams installed and tested the hundred-ton solid-propellant first stage, the P80, with the Interstage-1/2 structure that links the first two stages. This was followed by the booster’s final acceptance, which included testing of the thrust vector control system. Electrical and avionics interface and functional tests were also performed.

With the 30-tonne solid-propellant second stage, the Zefiro-23, moved to the mobile gantry from the Vega Booster Storage and Preparation Building, the second stage underwent final acceptance, including testing of its thrust vector control system.

The 10-ton Zefiro-9 solid-propellant third stage was added on top of the launcher, ahead of the integration of the AVUM. The total lift-off mass of Vega will be 139 metric tons. 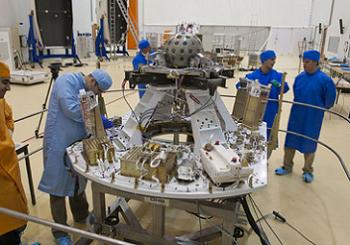 Vega’s first primary passenger, the LARES laser relativity satellite from Italy’s ASI space agency, has recently completed initial fit checks with the payload adapter and fairing. Six to nine small CubeSats and the ALMASat-1 from European universities have also been readied to be enclosed inside the fairing.

Integration of the “upper composite” fairing and payload is next up in the launch flow, to be followed by final checkout of the fully integrated launcher and the countdown rehearsal.

The launch window for Vega’s maiden flight, named VV01, opens on 26 January and closes in the first week of February – as much as some published launch manifest documentation claims the target date is at the end of that window.

Vega already has an interesting future, with ESA and Arianespace having already ordered four new launchers, amid studies for the launch of the LISA Pathfinder mission. The order complements the purchase of a first launcher in an agreement signed last year within the framework of the Verta contract, covering the five launches that follow Vega’s qualification flight.

The studies for the launch of the LISA Pathfinder scientific satellite of ESA, using a Vega launcher from the Verta batch, started at the end of September. The mission is scheduled for a launch window from October 2013 to September 2014. 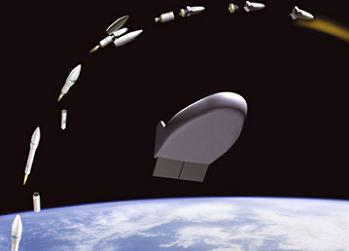 During it mission, the vehicle will attain an altitude of around 450 km, allowing it to reach a velocity of 7.5 km/s on entering the atmosphere and will collect a large amount of data during its hypersonic and supersonic flight, while it is being controlled by thrusters and aerodynamic flaps.