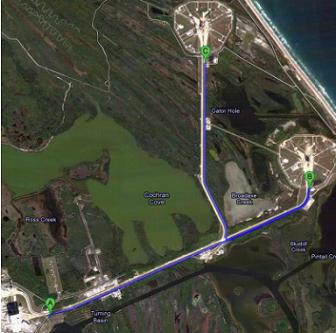 The Kennedy Space Center is undergoing improvements to its buildings and infrastructure, work which will continue at the spaceport through to 2013. Most of the work is taking place on the 50 year old waterway, which links the Turn Basin to the crawlerway through to both Pad 39A and 39B – the latter of which continues to undergo modifications ahead of hosting the Space Launch System (SLS).

The most iconic launch site in the world has fallen silent since the end of the Space Shuttle Program (SSP), but it at least hopes to transition into vitally important future role – one which will not only provide a home base for a number of commercial launch companies, but one which will eventually host crewed missions to Mars.

Although NASA is at the mercy of the ever-changing political climate, and a lot of NASA’s future ideas tend to remain as powerpoint presentations, actual work towards the future is already taking place at the Kennedy Space Center (KSC), part of the 21st Century Space Launch Complex drive.

One of the largest projects involves the revitalization of the KSC Water and Wastewater Systems, which have been in place since the spaceport’s initial construction, back during the drive towards the Apollo moon missions.

This effort is now into phase 3 of a multi-phased effort which will – through various enhancements – improve water quality, reduce water consumption and required flushing, replace or repair ageing pipes that are susceptible to breaks or leaks, and increase overall water and wastewater system reliability.

Despite its less-than-glamorous name, the Water and Wastewater system are vital arteries to operations throughout the center for restrooms, food preparation, fire protection and sound suppression at the launch pads – and can be seen stretching the entire length of the Crawlerway, before forking to both Pad 39A and Pad 39B.

“Upcoming activities of particular interest to the KSC population include parallel replacement of the 16-inch and 12-inch asbestos cement water mains with new ductile iron pipe along NASA Parkway from Kennedy Parkway to the Roy D. Bridges Bridge (aka Banana River Bridge); and segregation of fire and potable water supplies from the Turn Basin out to Launch Complex 39 with 4-inch and 3-inch PVC mains, respectively,” noted a construction update via L2 (L2 Link to presentation).

“There are several ways in which this construction will affect our workplace, including temporary roadway, lane and shoulder closures, temporary water outages or reduced water pressure for certain facilities, closed sidewalks or parking lot entrances, increased construction traffic, and temporary restroom closures.”

The work – contracted to Speegle Construction II, Inc – is set to be completed in the Spring of 2013. 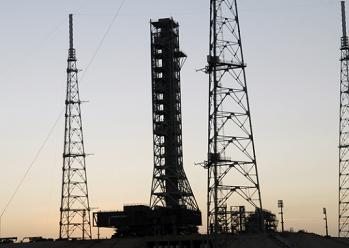 Currently, Pad 39B is preparing to host the Space Launch System (SLS), following its conversion from a Shuttle pad into what is known as a “Clean Pad”. Such a design is required to create the space for the use of the Mobile Launcher (ML) on site, which made its debut trip to the pad at the end of last year.

Pad 39A is currently mothballed as a Shuttle pad, as much as it will never host one of the iconic shuttle stacks ever again. It is likely that the pad will be leased to an unnamed commercial suitor, who may in turn convert the pad for their needs.

Some of the old infrastructure remains at 39B – such as the the giant water tower – remain in place at the converted pad, and will live on with the SLS program. 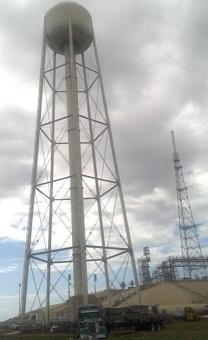 The Water Tower holds hundreds of thousands of gallons of water, which rushes down a plumbing system into the zero level deck of the Mobile Launch Platform, providing the required rush of water to supply the Sound Suppression System – which protects the launch vehicle from acoustical energy reflected from the platform during lift-off.

As noted in the construction update, the tower at 39B is also receiving a facelift, both internally and externally.

“A construction contract was recently awarded to RUSH Construction, Inc. to perform repair work on the Pad B Water Tower and Sound Suppression System. The scope of work includes repairs to the interior of the 300,000-gallon, 285-foot elevated water tank (constructed in the late1970s), repairs to the piping system, and sandblasting and recoating of the exterior of the tank, piping and associated supports.

The Tower is expected to be revamped by July of this year.

“Many KSC facilities were built prior to the development of NASA and KSC fire protection standards that require fire suppression systems in offices and areas containing critical systems or hardware,” added the update. “These projects are part of a phased, multi-year plan designed to provide a safer working environment for KSC employees and improve mission reliability for future programs.”

Numerous buildings at KSC are listed, from fire stations to the Operations and Checkout (O&C) building – with the latter currently undergoing a large renovation effort, which is now into Phase 5 of the work. 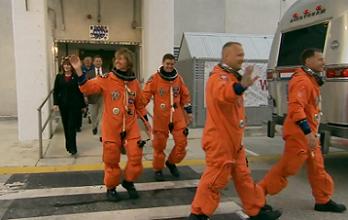 “This is the final phase of the O&C office area revitalization – to modernize the entire first floor – and is being executed in two stages, with the eastern half of the building currently in work,” noted the update on the building, most famous to the public as the facility from where the astronauts appeared in their flight suits ahead of boarding the Astrovan. Astronauts were housed inside the O&C building ahead of launch. 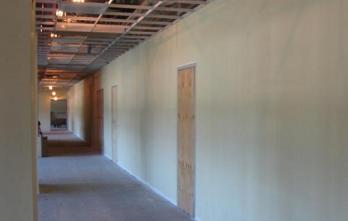 Upgrades to the lobby, sundry store, elevators, stairwells and bathrooms also are included.

“In addition to the interior work, all parking lots at the O&C will be resurfaced and reconfigured for improved traffic flow. The north parking lot is complete. Work to resurface the west parking lot began in November.

“The north, south, east and west parking lots will be completed separately to minimize parking congestion. Exterior work will include replacement of windows and a covered seating area adjacent to the cafeteria.”

The work is set to be completed in April, 2013 – and is being carried out by Sauer Construction, via design work by Jacobs Engineering. 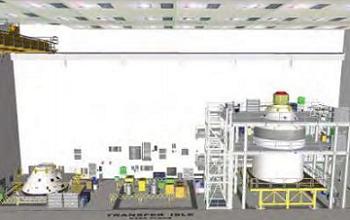 KSC is also preparing to host the new Orion crew vehicle, with work conducted inside the Multi-Payload Processing Facility (MPPF).

The first Orion set to arrive in Florida will be the Exploration Flight Test (EFT-1) Orion, which is currently being constructed at the Michoud Assembly Facility (MAF) in New Orleans. This Orion will be launched by a Delta IV-Heavy in early 2014.

“This project was designed to equip the Multi-Payload Processing Facility (MPPF), M7-1104, with reliable HVAC infrastructure to support future program needs, and specifically was developed to enable use of the facility in support of Orion processing operations,” the update added.

Given the work – carried out by Precision Mechanical – was only due to last a month, this phase of renovation has now been completed and is now into the turnover operations.

“The scope of work included the replacement of the existing chilled-water system, chilled-water pumps and make-up air units.  In order to maximize energy conservation during low-load scenarios, a smaller chiller was installed, along with the necessary controls modifications.”