SpaceX to launch two AsiaSat satellites via Falcon 9 in 2014 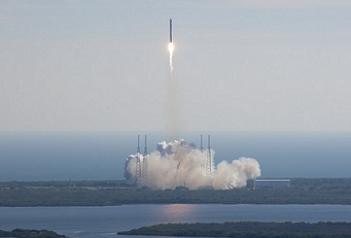 SpaceX have announced a contract to launch two Asia Satellite Telecommunications Company Limited (AsiaSat) satellites. AsiaSat 6 and AsiaSat 8 will be launched via SpaceX’s Falcon 9 launch vehicle, after the previous two AsiaSats were launched via the Russian Proton rocket, under the control of International Launch Services (ILS).

Wednesday’s contract announcement to launch the AsiaSat birds has resulted in SpaceX’s order book now being filled by a majority of commercial missions. The balance is concentrated on NASA contracts, as SpaceX push towards their commercial resupply (CRS) of the International Space Station (ISS).

The California-based company is also pushing towards the development of a crewed capability to return US domestic access to Low Earth Orbit.

The AsiaSat launches will be conducted by the Falcon 9 launch vehicle, lifting off from Florida’s Cape Canaveral Air Force Station (CCAFS) Launch Complex 40 in the first quarter of 2014.

“SpaceX is proud to be the choice of AsiaSat, a pioneer in advancing satellite communications in Asia,” said Elon Musk, SpaceX CEO and Chief Technology Officer.

“We are producing the most advanced launch vehicles in the world, and the international launch market has responded – commercial launches now represent over 60 percent of our upcoming missions.” 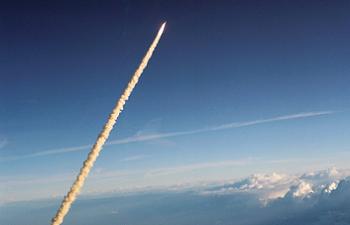 However, AsiaSat-1’s history began under the call sign of WeStar 6, launched in the payload bay of Space Shuttle Challenger during her STS-41B mission.

Challenger lifted off at 08:00 EST on February 3, 1984, on her fourth launch to begin the 10th Space Shuttle mission and the first under the new flight classification system. Had the previous numerical designation continued, this would have been the STS-11 mission.

Like her three previous missions, Challenger was inserted into a 28.5 degree 189nm orbit.

Once in orbit, Challenger’s crew deployed the WeStar 6 and Palapa-B2 satellites, while Bruce McCandless and Robert L. Stewart performed the first untethered EVA in history using the Manned Maneuvering Unit (McCandless) and the SRMS foot restraint for EVA purposes (Stewart).

Also carried aboard Challenger on this flight was the German-built Shuttle Pallet Satellite – which became the first satellite to be refurbished and re-flown into space following its first flight on STS-7. An electrical problem with SRMS (Shuttle Remote Manipulator System), however, precluded the deployment of the satellite as intended.

Sadly, WeStar 6 – and Palapa-B2 – became a black mark on the mission, after the satellites failed to properly fire their PAMs (Payload Assist Motor) after deployment, meaning they could not reach its desired GeoStationary orbit, and were stranded in a useless LEO trajectory. 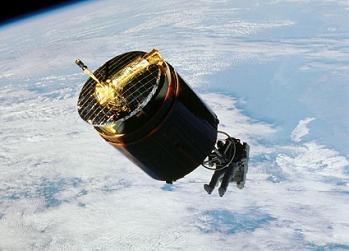 Later that year, Discovery came to the rescue, undertaking her second mission, STS-51A.

The retrieval of the WeStar 6 and Palapa-B2 communications satellites also marked the last untethered spacewalk of the Shuttle Program until 1994.

Brought back down to Earth and refurbished, AsiaSat purchased the WeStar 6 satellite and relaunched it as AsiaSat 1 on a Chinese Long March 3 rocket in 1990. This satellite is no longer in service.

AsiaSat 5 – launched in August, 2009 via an ILS Proton-M – was placed into orbit as a new generation satellite equipped with the latest technology and new beam coverage to provide highest quality television broadcast, telephone networks and VSAT networks for broadband multimedia services across Asia Pacific. 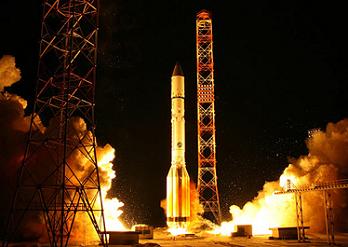 AsiaSat 7 was designed as a replacement satellite for AsiaSat 3S at 105.5 degrees East. This new generation satellite sports 28 C-band and 17 Ku-band transponders as well as a Ka-band payload. Its region-wide C-band beam covers over 50 countries across Asia, the Middle East, Australasia and Central Asia.

The launch, conducted from the Baikonur Cosmodrome in Kazakhstan on November 25, 2011 – was also an ILS mission, utilizing the Russian Proton-M launch vehicle. With the task of lofting AsiaSat 6 and 8 into orbit to be conducted by Falcon 9, the contract announcement appears to be a victory for SpaceX in the competitive launch services market.

“We are pleased to have SpaceX as our launch partner for the two upcoming missions. We look forward to the timely and successful launches of AsiaSat 6 and AsiaSat 8, thereby expanding our fleet from four to six satellites in 2014 to provide more high quality and comprehensive satellite services in the Asia-Pacific region,” said William Wade, President and Chief Executive Officer of AsiaSat.

The two SS/L 1300 satellites will serve Asia, the Middle East and Australasia.