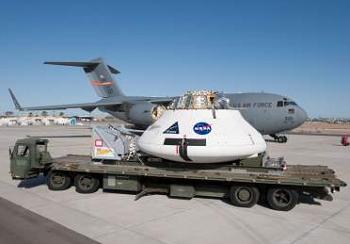 This year is already marking a significant ramp up in achievements for the Orion Program, as several test articles are put through their paces – ranging from testing at Lockheed Martin’s Denver facility, to the successful parachute test in Arizona – all at the same time as the Exploration Flight Test (EFT-1) Orion sees the opening salvo of backshell tiles rolling off the production line.

It has already been a big 2012 for Orion, both within NASA and in the public arena.

Examples of Orion’s effort to win hearts and minds include the Crew Module Pathfinder’s public tour, taking in 20,000 visitors during its transit from White Sands in New Mexico to the Kennedy Space Center (KSC) in Florida, with stops in Oklahoma City, Dallas and Huntsville.

The Orion Pad Abort 1 Crew Module has also been moved to the Vehicle Assembly Building (VAB) at KSC, where it will be available for viewing by visitors taking a tour from the KSC visitor center.

Last month, students from Texas A&M University visited the Orion Medium Fidelity Mockup at JSC as part of the SSANS (Students Shaping America’s Next Spacecraft) program. The Industrial Engineering majors presented work on the Orion Lighting System hardware and the Orion Budget and Planning Project as part of the Preliminary Design Review (PDR).

Orion also featured in a superb NASA video called “We are the Explorers” – which has raced to 100,000 views in just few days on youtube alone. However, it’s the hardware development milestones which will are the crucial element for Orion’s aspirations of flying in space.

This past week saw the successful “second generation” test of Orion’s parachutes, a system that is no less crucial than any other part of the spacecraft, given it is tasked with providing the final crucial leg to safely conclude a mission in deep space – bringing the spacecraft and its crew home for a splashdown in the Pacific Ocean.

Known as the Capsule Parachute Assembly System (CPAS), the redesigned hardware – mated to a boilerplate Orion – was deployed as part of the Parachute Test Vehicle (PTV), allowing for the deployment of the system via a pallet – or sledge – system out of the back of a US Air Force C-17 aircraft.

As noted by NASA, such a test helps examine how Orion’s wake – the disturbance of the air flow behind the vehicle – would affect the performance of the parachute system. Parachutes perform optimally in smooth air that allows proper lift, but a wake of choppy air can reduce parachute inflation.

The test was the first to create a wake mimicking the full-size Orion vehicle and complete system.

Regardless, the pressure was on for another successful test from just the parachute deployment standpoint, following the 2008 failure of the previous PTV/CPAS drop, resulting in the test vehicle being destroyed as it crashed to the ground. 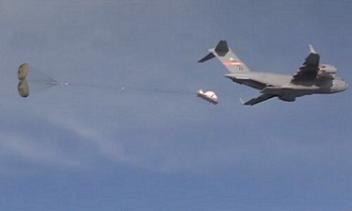 Dropped from an altitude of 25,000 feet above the US Army’s Yuma Proving Grounds in Arizona, the deployment of the system was picture perfect, allowing for the Orion to release from its pallet system to drop feely under similar conditions it would expect to encounter after re-entry.

The drogue chutes were successfully deployed between 15,000 and 20,000 feet, followed by the pilot parachutes, which deployed the main landing parachutes. Orion landed on the desert floor at a speed of almost 17 mph, well below the maximum designed touchdown speed of the spacecraft.

This system will be part of the EFT-1 Orion, the first test of Orion’s heatshield and Thermal Protection System (TPS) as it re-enters from a high apogee orbit at over 20,000mph, following its launch atop of a Delta IV-Heavy launch vehicle in 2014. 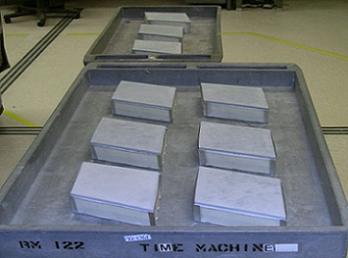 Known as the backshell – an area surrounding part of the crew module – machining of the first TPS tile, known as Tile 875-1 on Panel H, was recently completed for the EFT-1 Orion, as reported by this site.

Per the latest Orion update presentations on L2 Orion’s Section (L2 Link), the first set of nine identical tiles have now been manufactured at the Thermal Protection System Facility at KSC and are awaiting inspection.

The tiles will next be coated with the Toughened Unipiece Fibrous Insulation (TUFI) coating and the outer black Reaction Cured Glass (RCG) coating. After the coating is applied and fired in a kiln, the inner surface of the tiles will be machined to the final thickness.

At the latest count, sixteen tiles are in the coating process and twenty eight tiles are in machining. When completed, EFT-1 will have approximately 1300 tiles, making up the backshell of the Orion. 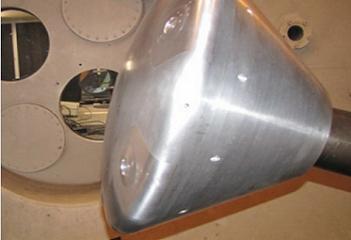 Not unlike the Apollo spacecraft, the blunt business end of the Orion heatshield will be covered in an ablative material – an Avcoat and Phenolic Impregnated Carbon Ablator, with a technical name of AVCO 5026-39 HCG (Filled Epoxy Novalac in Fiberglass-Phenolic Honeycomb). 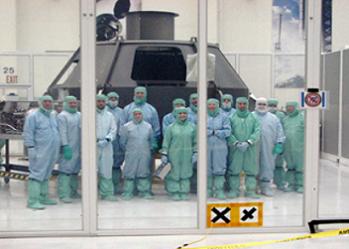 This process – as outlined in the Orion update presentation (L2 Link) – will be critical for welding the tubing of flight fluid systems on the Orion spacecraft.

Also updating work taking place on the Orion GTA (Ground Test Article) in Denver, the team at Lockheed Martin successfully completed all eight multi-point vibration tests, which concludes a large amount of testing on the GTA at the Waterton facility.

Additional data will be collected throughout the coming days, while the next planned use of the GTA will be during landing tests at the Langley Research Center (LaRC) Hydro Impact Facility in early 2013.